Disaster Aid To and Through Religious Organizations 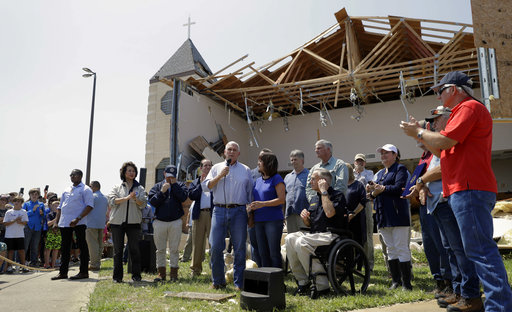 In this 2017 file photo, Vice President Mike Pence, with his wife Karen, speaks to residents affected by Hurricane Harvey during a visit to the First Baptist Rockport Church in Rockport, Texas. The Federal Emergency Management Agency was rethinking a policy that routinely denies aid to religious institutions if the money will be used to rebuild sanctuaries damaged or destroyed in natural disasters. Several churches hit by recent hurricanes challenged the policy in court. In January 2018, FEMA revised its rules to include churches that provide community services among the entities that could receive disaster aid. (AP Photo/Eric Gay, used with permission from the Associated Press)

Although the churches were unable to obtain a preliminary injunction against this policy, after Justice Samuel Alito asked FEMA to respond to these suits filed against them, in January 2018, FEMA revised its rules to include churches that provide community services among the entities that could receive such aid; it also applied the policy retroactively to all disasters declared since Aug. 23, 2017.

Heralded by many who believe that FEMA had been treating churches as second-class entities, the move was also criticized by some groups who feared that it would erode what they believe to be the wall of separation between church and state.

The cases remain in place, so future court decisions might provide more clarity.

President Donald Trump had supported a change in policy, which FEMA attributes largely to the decision in Trinity Lutheran Church of Columbia v. Comer (2017). FEMA’s policy, however, arguably goes beyond this decision by permitting aid not simply for school playgrounds but also for religious sanctuaries, whose primary purpose is to promote worship.