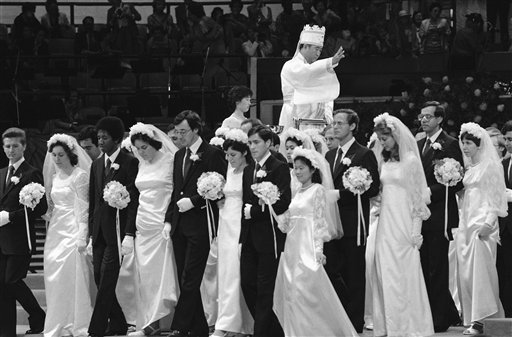 The Holy Spirit Association for the Unification of World Christianity, a group founded by Reverend Sun Myung Moon shown here presiding over a mass wedding in 1982, successfully challenged a Minnesota state law that required them to register as a charity and file certain reports though it did not require all religious groups to do so. The Supreme Court said the law violated the establishment clause of the First Amendment. (AP Photo/Marty Lederhandler, used with permission from the Associated Press)

In Larson v. Valente, 456 U.S. 228 (1982), the Supreme Court held that a Minnesota statute treating religious organizations differently based upon the percentage of contributions the organizations received from their members violated the Establishment Clause of the First Amendment.

Minnesota differentiated between religious organizations based on percentage of member contributions

Minnesota’s Charitable Solicitation Act, which was designed to protect against fraudulent charities, required that religious organizations that received 50 percent or less of their total contributions from members and affiliated organizations had to register and file certain financial reports under the act.

Religious organizations that received more than 50 percent of their contributions from members were exempt from the act’s registration and reporting requirements. Members of the Holy Spirit Association for the Unification of World Christianity (including Valente), which was required to register under the act, filed suit, and both the federal district court and the Eighth Circuit Court of Appeals held that the provision was unconstitutional.

The Supreme Court, in a 5-4 decision, affirmed the lower courts’ rulings. After determining that the church members had prudential standing, the Supreme Court analyzed the “50 percent” provision using strict scrutiny because the law discriminated among religions instead of preferring religion over nonreligion.

Writing for the majority, Justice William J. Brennan held that, although the state had a compelling governmental interest — protecting citizens from fraud — the 50 percent provision was not narrowly tailored to further that interest.

Because the state had produced no evidence that members exercise supervision and control over an organization’s activities when their contributions exceed 50 percent; that such membership control, if it exists, provides an adequate safeguard against an organization’s abusive solicitation of the public; or that the need for public disclosure of an organization’s funding increases along with the percentage of nonmember contributions, the statute could not survive strict scrutiny.

The Court noted that this statute illustrated the dangers of politicizing religion, although it did not apply the Lemon test (from Lemon v. Kurtzman [1971]) because this case involved discrimination among religious groups.

The Court cited the legislative history of the provision, which clearly showed that the state legislature was targeting certain religious groups while exempting others.

Dissenters thought defendant had not proved standing as a religious organization

Justice William H. Rehnquist, joined by three other justices, dissented on the grounds that the church members did not have standing to challenge the 50 percent provision because the state required the association to register as a result of its status as a “charitable organization” and not as a religious organization.

For the provision, which is contained in one of the act’s exemptions, to even apply to it, Rehnquist argued, the association would first have to prove that it is a religious organization as defined within the act.