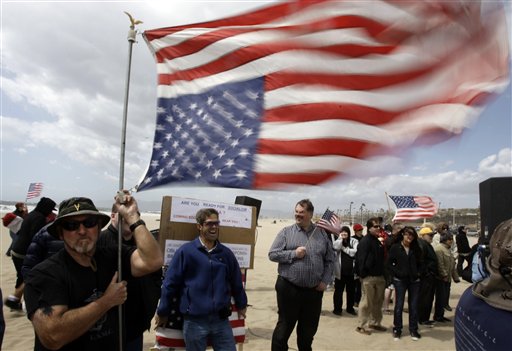 The Supreme Court examined in Spence v. Washington (1974) whether holding the American flag upside down with a peace symbol affixed warranted First Amendment protection. In the Spence Test for expressive activity, the Supreme Court ruled that to receive First Amendment protection, there must be an intent to convey a particularized message and reasonable likelihood that the message would be understood. In this 2009 photo, Vietnam veteran Allan Radcliffe, left, holds a U.S. flag upside down in Los Angeles as a sign of "distress" to protest against government spending. (AP Photo/Damian Dovarganes, used with permission from the Associated Press)

The Spence Test is a test used in First Amendment cases to determine whether forms of expressive conduct are “expressive” enough to warrant First Amendment protection. The test derives from the U.S. Supreme Court decision bearing its name, Spence v. Washington (1974).

In Spence v. Washington, the Supreme Court ruled that college student Harold Ormond Spence had a First Amendment right to display an American flag upside down with a peace symbol affixed to it. Spence displayed the flag to express his opposition to the U.S. bombing of Cambodia during the Vietnam War and the shooting of students at Kent State University.

Authorities, however, charged Spence under a Washington state law prohibiting “improper use” of the American flag.

Expressive conduct is protected under First Amendment if message is intended, understood

The Court grappled with whether Spence engaged in expression deserving of First Amendment protection. In its decision, the Court wrote: “An intent to convey a particularized message was present, and in the surrounding circumstances the likelihood was great that the message would be understood by those who viewed it.” This passage formed the basis for what came to be known as the “Spence Test.”

In another flag case, Texas v. Johnson (1989), the Court quoted the language from the Spence decision. The result seemed to elevate the language in Spence to a more formal two-part test. In order to receive First Amendment protection, there must be (1) an intent to convey a particularized message and (2) a reasonable likelihood that it would be understood.

Spence test has been applied in tattoo, school uniform cases

Courts have applied or discussed the Spence test in cases involving tattooing, displaying signs near busy streets, the wearing of sagging pants, and challenges to school uniform policies. It has become a familiar staple in First Amendment jurisprudence.