Capitol Honors for the Dead 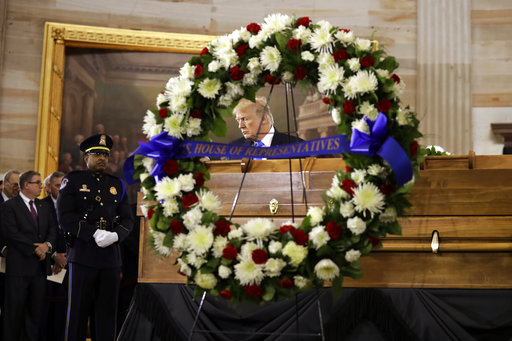 President Donald Trump pays his respects at the casket of Reverend Billy Graham in the Rotunda of the U.S. Capitol building, Wednesday, Feb. 28, 2018, in Washington. (AP Photo/Evan Vucci)

In February 2018, the Rev. Billy Graham, a popular evangelist who was known for filling stadiums with huge audiences for his crusades and for counseling many U.S. presidents, became the first religious figure whose body had the privilege of lying in honor at the U.S. Capitol Building in Washington, D.C. after he died at the age of 99.

This prompted some discussion in the media and among scholars as to whether this was appropriate or whether it was a form of “establishment” of religion, prohibited by, or in tension with, the First Amendment.

Republican House Speaker Paul D. Ryan and Senate Majority Leaders Mitch McConnell made the decision, which was reaffirmed by congressional resolution, and led to a memorial service in the Capitol in Graham’s honor.

Was allowing Billy Graham's body to lie "in state" in the Capitol a violation of establishment clause?

To date 31 individuals have lain “in state” in the Capitol Rotunda.

Senator Henry Clay was the first individual to be so honored.  Other honorees have included U.S. presidents and a number of “unknown soldiers.”  Graham is the fourth non-governmental official or non-civil servant to lie “in honor,” the others being two capitol police officers who died in the line of duty in 1998 and civil rights icon, Rosa Parks in 2005.

In contrast to these individuals, Graham was known for his specific advocacy of conversion to the Christian faith.  Although he was known for racially integrating his religious crusades, Graham was not an active participant in the civil rights movement.  He was sometimes accused of allowing his political biases to show, albeit not nearly as much as his son Franklin, who is also an evangelist and who has been a vocal supporter of, if not an apologist for, President Trump.

The United States does recognize Martin Luther King, Jr, a Baptist minister, with a national holiday.  Although his work for civil rights was clearly motivated by his religious beliefs, one might argue that he was recognized not as a pastor per se, but as a civil rights leader.

Billy Graham avoided the financial and sexual scandals that have surrounded a number of other prominent evangelists and, much like George Whitefield and other leaders of the Great Awakenings, arguably promoted the moral health of the nation by emphasizing Christian virtues like clean living, love, and forgiveness.  During the Cold War, Graham often contrasted the Christian life with communist values.