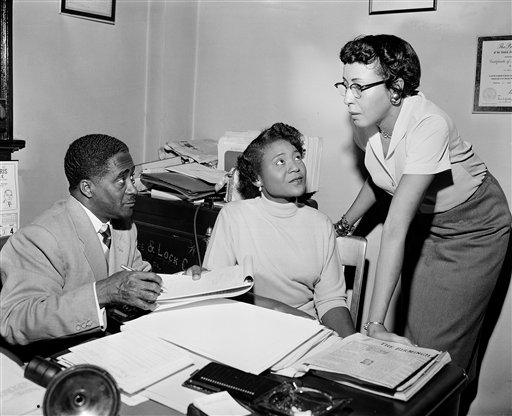 The U.S. Supreme Court first recognized the right of people to associate freely for expressive purposes in 1958 in NAACP v. Alabama. The NAACP was active in Alabama after the landmark decision in Brown v. Board of Education against racial segregation in public schools. This activity led the state to investigate the organization, demanding a list of members. The NAACP refused, saying publicizing the list would invite repression against members. The Court upheld the rights of the NAACP. In this 1956 photo in Birmingham, Alabama, NAACP leaders Ruby Hurley, right, Southeast regional secretary, and attorney Arthur Shores, left, work with Autherine Lucy, center, a 26-year-old student and first black person to attend the University of Alabama. After mob demonstrations in Birmingham, she had been barred from returning. (AP Photo/Gene Herrick with permission from The Associated Press.)

The freedom of association — unlike the rights of religion, speech, press, assembly, and petition — is a right not listed in the First Amendment but recognized by the courts as a fundamental right.

In that case, the state of Alabama sought to require the NAACP to disclose its membership list. In his majority opinion, Justice John Marshall Harlan II wrote: “It is beyond debate that freedom to engage in association for the advancement of beliefs and ideas is an inseparable aspect of the ‘liberty’ assured by the Due Process Clause of the Fourteenth Amendment, which embraces freedom of speech.”

This case and others caused leading First Amendment scholar Thomas I. Emerson to write that “freedom of association in the United States has assumed increasing significance as modern society has developed, and problems of associational rights have given rise to new and perplexing constitutional issues.” (35).

Some courts place the right to intimate association under the Due Process Clause, but others place it under the ambit of the First Amendment.

The U.S. Supreme Court addressed the concept of intimate association in Roberts v. United States Jaycees (1984), reasoning that the state of Minnesota’s interests in eradicating gender discrimination trumped the right of male members in social clubs to associate only with males and not females.

For example, the U.S. Supreme Court addressed the associational rights of the Boy Scouts of America in excluding James Dale, an assistant scoutmaster, because he was gay. The Court ruled 5-4 in Boy Scouts of America v. Dale (2000) that the state “interests embodied in New Jersey's public accommodations law do not justify such a severe intrusion on the Boy Scouts' rights to freedom of expressive association.”

Another line of freedom of association cases concern the rights of political parties to set their own rules and govern their internal affairs.

Similarly, the Court in California Democratic Party v. Jones (2000) ruled that a state law mandating open primaries violated the associational rights of political parties.  The law stated: ““[a]ll persons entitled to vote, including those not affiliated with any political party, shall have the right to vote ... for any candidate regardless of the candidate’s political affiliation.”

The Court ruled that the First Amendment shielded the political parties in determining whether to open up their primaries to all voters of all parties.

In Abood v. Detroit Board of Education (1977), the Supreme Court ruled that unions could not force employees to pay for fees for ideological and political activities not relevant to the union’s basic collective-bargaining duties. The Court ruled that requiring public employees to pay fees to support ideological causes they objected to violated their associational rights. The Court broadly upheld the concept of mandatory service fees.

However, in 2018 in Janus v. American Federation of State, County, and Municipal Employees, the Court overruled the allowance of mandatory service fees. In Janus, the Court said an Illinois law requiring non-union members to pay service fees to unions representing them in collective bargaining was an unconstitutional form of compelled speech.