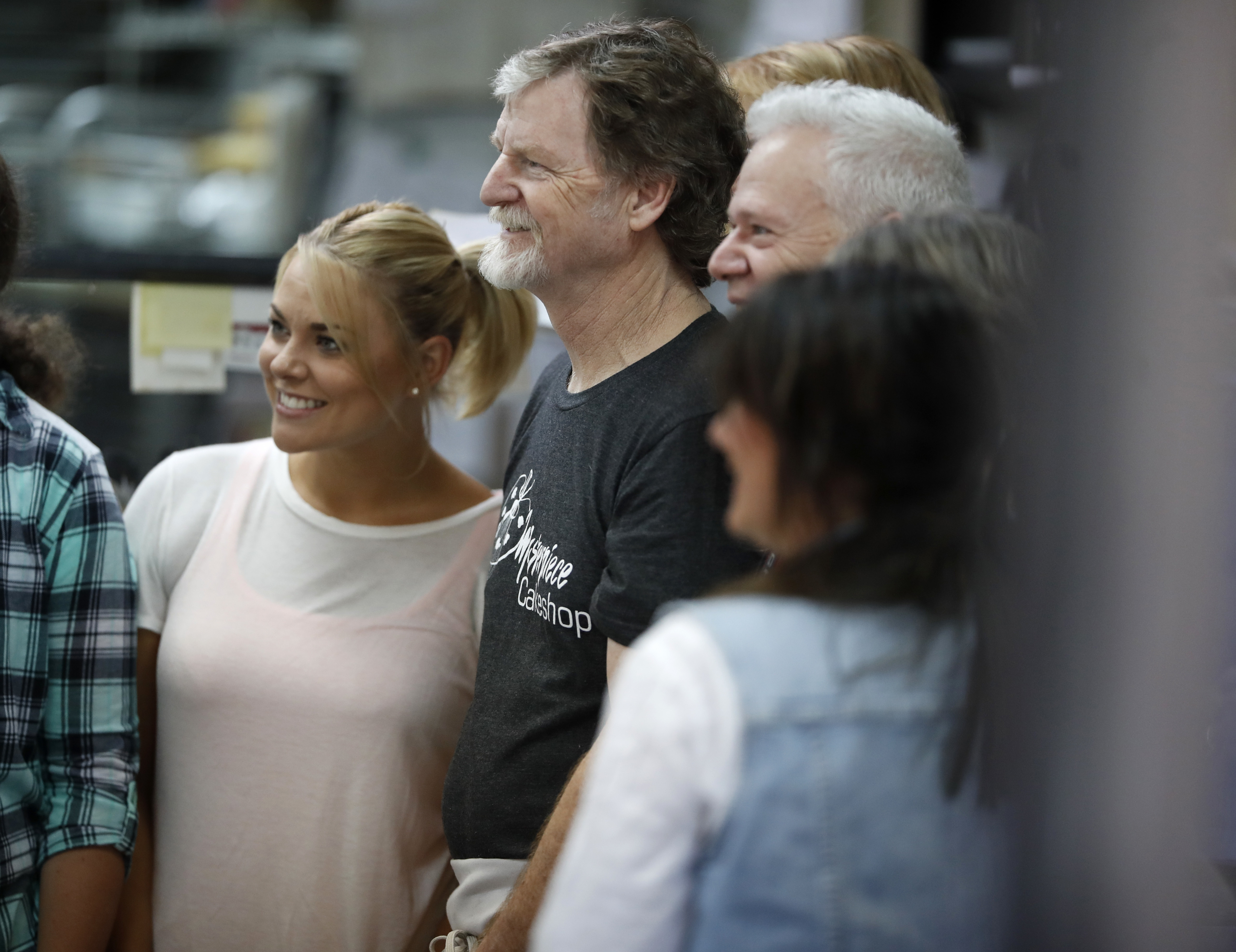 Baker Jack Phillips, center, owner of Masterpiece Cakeshop, is surrounded by supporters for a photograph inside his shop after the U.S. Supreme Court ruled in Masterpiece Cakeshop v. Colorado Civil Rights Commission (2018) that he could refuse to make a wedding cake for a same-sex couple because his religious beliefs did not violate Colorado's anti-discrimination law Monday, June 4, 2018, in Lakewood, Colo. (AP Photo/David Zalubowski, used with permission from the Associated Press)

In a long-anticipated decision, the U.S. Supreme Court in Masterpiece Cakeshop v. Colorado Civil Rights Commission 585 US ___ (2018) issued a 7-2 opinion on June 4, 2018 using the free exercise clause of the First Amendment (as applied to the states through the Fourteenth Amendment) to uphold the right of Jack Phillips, the owner of the Masterpiece Cakeshop in Lakewood, Colorado, to refuse to custom design a cake for a same-sex wedding.  The majority decision was authored by Justice Anthony Kennedy (who has authored many of the Court’s path-breaking cases on gay rights) and joined by all members of the Court except for Ruth Bader Ginsburg and Sonia Sotomayor.

In the summer of 2012, Charlie Craig and Dave Mullins, had entered Phillips’ shop and requested that he create a cake for their wedding.  Phillips, a devout Christian who opposed same-sex marriage on the basis of his faith, cited both his faith and the fact that Colorado did not, at the time, recognize such marriages (Craig and Mullins had planned to marry in Massachusetts and return to Colorado for the celebration).  Moreover, the U.S. Supreme Court had not yet issued its decisions in United States v. Windsor (2013), prohibiting discrimination against gay couples with respect to estate taxes or in Obergefell v. Hodges (2015) prohibiting state bans on same-sex marriages.

Baker found to have violated the Colorado Anti-Discrimination Act

After Craig and Mullins filed a complaint with the Colorado Civil Rights Commission under the Colorado Anti-Discrimination Act (CADA), it found probable cause to believe that Phillips had violated CADA. A state Administrative Law Judge (ALJ) heard the case in which Phillips asserted that requiring him to provide the cake would violate First Amendment free speech rights “by compelling him to exercise his artistic talents to express a message with which he disagreed,” and violate his First Amendment rights to the free exercise of his religion. The ADJ rejected both arguments.  The Civil Rights Commission affirmed this judgment and ordered Phillips to conduct comprehensive staff training on public accommodations and prepare quarterly compliance reports.  The Colorado Court of Appeals affirmed the decision.

Justice Kennedy’s majority opinion for the U.S. Supreme Court stressed that “gay persons and gay couples cannot be treated as social outcasts or as inferior in dignity and worth.”  Kennedy also recognized that “When it comes to weddings, it can be assumed that a member of the clergy who objects to gay marriage on moral and religious grounds could not be compelled to perform the ceremony without denial of his or her right to the free exercise of religion,” which would be protected by the free exercise clause.  In the case at hand, Phillips had not refused to sell all products to gays but argued that he should not be forced “to use his artistic skills to make an expressive statement” endorsing same-sex marriages.

In examining remarks that the Civil Rights Commission made with respect to Phillips, Justice Kennedy observed that members of the commission had expressed negative animus toward Phillips’ religious beliefs rather than treating them with the neutrality that the free exercise clause required.  One of the board members had compared Phillips’ rationale to justifications for slavery and the Holocaust, and no one on the Commission took issue with the statement.  Although some justices questioned the relevance of statements that lawmakers made with respect to ascertaining legislative intent, in this case, the information was relevant because the Commission was “an adjudicatory body deciding a particular case.”  Moreover, the Commission had treated Phillips differently than it had treated other bakers who had refused to prepare cakes with derogatory messages directed against same-sex unions.  Whereas Commissioners had refused to accept the argument in the latter case that the message would be attributed to the customer rather than the baker, they attempted to do so in the case of Phillips.  Moreover, Commissioners had cited evidence in the latter case that the bakers were willing to sell other products to prospective customers but had discounted the fact that Phillips had also expressed willingness to sell non-custom creations to gays.

Citing the decision in West Virginia State Bd. of Ed. v. Barnette (1943), which upheld the right of students to refrain from saluting the flag, Justice Kennedy said that the free exercise clause prohibits the government from choosing which opinions are “orthodox” and which are not.   The Court further cited Church of Lukumi Babalu Aye v. City of Hialeah (1993), for the principle that “The free exercise clause bars even ‘subtle departures from neutrality’ on matters of religion.”  The Commission’s “hostility” demonstrated that instead of being neutral, it had demonstrated hostility to Phillips’ beliefs.

Justice Elena Kagan issued a concurring opinion, joined by Justice Stephen Breyer. Agreeing that the Commission had demonstrated hostility toward Phillips on the basis of his religious beliefs, they believed that Colorado could have distinguished this case from the one where bakers refused to print messages that they disfavored on the basis that the bakers would have done so regardless of the religion or sexual orientation of the customers.

Justice Neil Gorsuch authored another concurring opinion, joined by Samuel Alito, reiterating that the free exercise clause protects unpopular, as well as popular, religious beliefs. Gorsuch further used the distinction between “intended and knowingly accepted affects” to indicate that Phillips was not attempting to discriminate against same-sex couples but only to distance himself from endorsing a celebration that he thought was ungodly.  Gorsuch denied the suggestion “that cakes with words convey a message but cakes without words do not.”  He argued that wedding cakes conveyed a symbolic message much as flags or other emblems.  Phillips had not refused to bake a generic cake but only one that celebrated a same-sex union that he thought violated his religion.

Justice Clarence Thomas wrote an additional opinion concurring in the judgment, which Gorsuch also joined.  Whereas the majority opinion focused on the free exercise clause, Thomas wanted to stress Phillips’ free speech claim.  Thomas believed that designing a cake was just as much “expressive conduct” as nude dancing or flag burning, which the Court had protected in other cases.   Moreover, he believed that requiring Phillips to bake a cake was an unconstitutional form of compelled speech. Thomas pointed out that Phillips considered himself to be an artist, and that forcing him to celebrate a ceremony that he disapproved could not simply be remedied by allowing him to post a disclaimer.  Thomas further argued that the decision on Obergefell made it even more important that those with minority opinions be allowed to express them.

Justice Ruth Bader Ginsburg authored the only dissent, which Sonia Sotomayor joined.  Both agreed that gay persons should be protected and denied that the Free Exercise clause had been violated.  They distinguished this case from ones involving the refusal to make a cake with an anti-gay message on the basis that the baker would have made the same decision regardless of the customer’s religion. Ginsburg thus thought there was a difference between denying service on the basis of a customer’s identity rather than on a judgment that a particular message was demeaning.