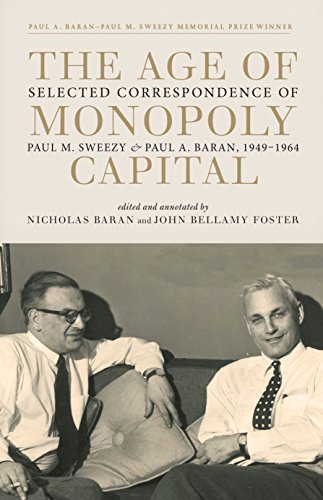 Paul M. Sweezy, pictured on the right on the cover of one of his books, refused to testify about the content of a university guest lecture, prompting a New Hampshire attorney general investigating his associations to succesfully have him cited for contempt and sentenced to a jail term. The U.S. Supreme Court overturned the action in the case Sweezy v. New Hampshire (1957), upholding First Amendment academic freedom and free speech and putting limits around how far a state could go in investigating a citizen for engaging in subversive behavior.

In Sweezy v. New Hampshire, 354 U.S. 234 (1957), the Supreme Court ruled that the New Hampshire attorney general had gone too far in conducting an investigation on behalf of the state legislature into the beliefs and associations of University of New Hampshire professor Paul M. Sweezy, who was suspected of being engaged in subversive behavior.

This decision is important both in recognizing the need for academic freedom and in using the due process clause of the Fourteenth Amendment to apply similar pertinency requirements at the state level to those that the Supreme Court had already applied to congressional investigation in Watkins v. United States.

Professor refused to testify about speech he gave at university

New Hampshire adopted a law in 1951 that dissolved “subversive organizations” and made “subversive persons” ineligible for employment by the state. The legislature further authorized the attorney general to serve as an investigating committee.

In testimony before the attorney general, Sweezy denied being a member of the Communist Party. He also denied knowledge of any communist infiltration into the Progressive Party of New Hampshire.

But, apart from denying that he had advocated the violent overthrow of the government, Sweezy refused to testify about the content of a speech he had given at his university or to give further information about the state Progressive Party. Although the attorney general had no power to hold witnesses in contempt, he could go to a state superior court, as he did in this case, to obtain a contempt citation and impose a jail term.

In a decision authored by Chief Justice Earl Warren and joined by three other justices, the Court acknowledged that legislative investigations “are capable of encroaching upon the constitutional liberties of individuals,” particularly when investigators are vested “with a broad and ill-defined jurisdiction.” In the case at hand, the state legislature had not provided proper definitions of “subversive” persons or organizations, and there was no indication that the attorney general was seeking information that the legislature had authorized him to seek.

Further, the Court’s concerns were magnified by the involvement of First Amendment rights of “academic freedom and political expression.” Warren accordingly struck down the New Hampshire Supreme Court’s decision.

Justice Felix Frankfurter wrote a concurring opinion in which John Marshall Harlan II joined. Like the majority opinion, it cited “the grave harm resulting from governmental intrusion into the intellectual life of a university” and “the inviolability of privacy belonging to a citizen’s political loyalties.”