By David Hudson Jr., November 2018
Other articles in Judges and Justices 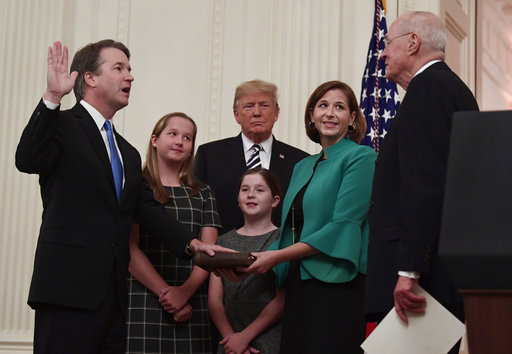 Brett M. Kavanaugh (1965- ) is an Associate Justice of the United States Supreme Court who was nominated by President Donald Trump and confirmed by the U.S. Senate in October 2018 for his seat by a narrow 50-48 vote.

Previously, Justice Kavanaugh served for more than a dozen years on the U.S. Court of Appeals for the District of Columbia Circuit.

Born in Washington D.C., Kavanaugh grew up in Bethesda, Maryland.  He earned both his undergraduate and law degrees from Yale University. During his law school tenure, he was a member of the prestigious Yale Law Journal.

Kavanaugh clerked on U.S. Appeals courts and for Justice Kennedy

Following his Supreme Court clerkship, he worked for Ken Starr in the Office of Independent Counsel.After a brief stint in private practice at the law firm Kirkland & Ellis, he returned to the Independent Counsel and even argued a case before the U.S. Supreme Court, Swidler & Berlin v. United States (1998), that dealt with extent of the attorney-client privilege.He also worked heavily on the so-called Starr Report, the detailed publication by the Independent Counsel on the investigation into President Bill Clinton’s relationship with intern Monica Lewinsky.

Later, he served as an attorney under White House Counsel Alberto Gonzales.  He later held other positions in the administration of President George W. Bush, including Assistant to the President and White House Secretary.

He showed solicitude for First Amendment principles in a dissenting opinion in Cablevision Sys. Corp. v. FCC (2017).  His colleagues in the majority rejected a First Amendment challenge to a FCC regulation that prohibited exclusive contracts between cable operators and cable affiliated programming networks.

“The First Amendment endures, and it applies to modern means of communication as it did to the publishers, pamphleteers, and newspapers of the founding era,” Kavanaugh wrote. “The Supreme Court has repeatedly ruled that video programming distributors (such as Comcast, DIRECTV, DISH, Time Warner, Cablevision, Verizon, and AT&T) and video programming networks (TNT, ESPN, Fox News, MSNBC, and several hundred others) are editors and speakers protected by the First Amendment’s guarantees of freedom of speech and the press.”

Kavanaugh also appeared to be sensitive to First Amendment arguments in campaign finance cases.  He wrote the decision for a unanimous panel in Emily’s List v. FEC (2009), ruling that Federal Election Commission regulations limiting how non-profits spend their money violates the First Amendment.  Kavanaugh wrote that Supreme Court precedent establishes that the “regulation of non-profits does not fit within the anti-corruption rationale, which constitutes the sole basis for regulating campaign contributions and expenditures.”

He authored an interesting concurring opinion in Mahoney v. Doe (2011), which involved a First Amendment challenge to a D.C. rule that prohibited defacing public or private property involving sidewalk chalking.  A group of protesters challenged the law, contending that it violated their right to protest outside of the sidewalk outside of the White House on Pennsylvania Avenue.

Judge Kavanaugh has written several strong opinions in the defamation area. Consider his opinion in Kahl v. Bureau of National Affairs (2017).  In that decision, Yorie van Kahl, an anti-tax activist convicted of murdering two marshals, sued BNA for defamation after the group incorrectly wrote in one of its publications that the sentencing judge had said that the defendant lacked remorse.  In reality, those statements were made by a prosecutor.

Kavanaugh wrote the panel opinion, dismissing the suit.  “To preserve First Amendment freedoms and give reporters, commentators, bloggers, and tweeters (among others) the breathing room they need to pursue the truth, the Supreme Court has directed courts to expeditiously weed out unmeritorious defamation suits,” he wrote.

Kavanaugh reasoned that Kahl as a limited-purpose public figure failed to show that the publication acted with actual malice.

With respect to the Establishment Clause, Judge Kavanaugh appears to consider the history and tradition of practices in deciding challenges to governmental practices.  For example, A D.C. Circuit panel rejected atheists’ challenges to prayers at Presidential inauguration ceremonies in Newdow v. Roberts (2010).