By David L. Hudson, Jr.
Other articles in Freedom of the Press issues and topics, Media, Legal Terms and Concepts Related to Speech, Press, Assembly, or Petition 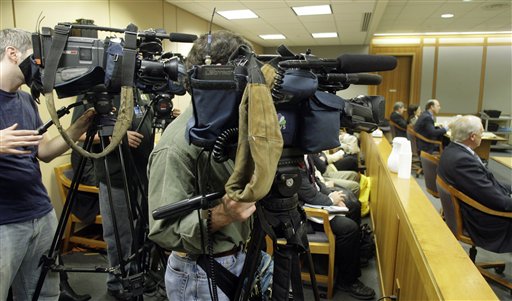 The Supreme Court has not granted the press more access rights than the public. For example, the court has ruled that the press has the right to be present at criminal trials, basing it on the history and tradition of the general public having a right to attend. (AP photo of journalists attending and filming a criminal trial in Alaska, reprinted with permission of The Associated Press.)

The First Amendment’s language appears to provide a special right for the press, for what has been termed “the Fourth Estate” – the fourth unofficial branch of government that serves as the watchdog of a free society and monitors the official three branches of government.

After all, James Madison and the Framers approved of a First Amendment that contains a separate Press Clause – “or of the press.”  Many scholars have pointed out that freedom of the press had special relevance and importance in the Founding era.

However, the U.S. Supreme Court has taken a narrow view of the “Press Clause” and has held in a line of cases that the First Amendment does not provide the press any greater right of access than that of the general public.

For example, in Houchins v. KQED, Inc. (1978), the Court ruled that the First Amendment did not give the press the right to enter a jail to film.  The Court wrote that “the media have no special right of access to the [jail] different from or greater than that accorded the public generally.”

Justice Potter Stewart advanced a different point of view in his concurring opinion in the decision.  “That the First Amendment speaks separately of freedom of speech and freedom of the press is no constitutional accident, but an acknowledgment of the critical role played by the press in American society,” he wrote. “The Constitution requires sensitivity to that role, and to the special needs of the press in performing it effectively.”

Scholars Patrick J. Charles and Kevin O’Neill criticize the Court’s approach in Richmond Newspapers of equating press access with the general right of public access: “Because the role of the press is to keep the public informed, individual members of the public will not likely undertake their own investigations of the prison system or other government institutions. So it makes no sense, under the Press Clause, to define press access in terms of public access.” (1070).

Thus, the modern U.S. Supreme Court has, in the words of scholar Sonya West, reduced the Press Clause to a “constitutional redundancy.” (1027-28).

Part of the problem has been the Court’s trouble with determining exactly who is a member of the press.  The Court struggled with this in the context of a journalist privilege to keep sources confidential in Branzburg v. Hayes (1972), writing: “The informative function asserted by representatives of the organized press in the present cases is also performed by lecturers, political pollsters, novelists, academic researchers, and dramatists. Almost any author may quite accurately assert that he is contributing to the flow of information to the public, that he relies on confidential sources of information, and that these sources will be silenced if he is forced to make disclosures before a grand jury.”  This problem of defining the press is only exacerbated in an age of bloggers and citizen journalists.