By David L. Hudson, Jr.
Other articles in Judges and Justices 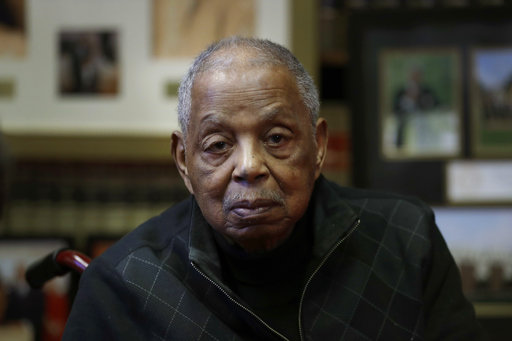 In this 2017 photo, Judge Damon J. Keith is interviewed in his office in Detroit. Keith, marking 50 years as a federal judge, says he's driven by two maxims: "Treat everyone with dignity" and "Equal justice under law." (AP Photo/Carlos Osorio, with permission from The Associated Press.)

Damon Keith (1922-2019) was a long-serving judge on the Sixth U.S. Circuit Court of Appeals and before that a federal district court judge from his home state of Michigan.

The grandson of slaves, Keith overcame severe racial discrimination to become an eminent federal jurist. Wayne State President Roy Wilson may have said it best: “Damon Keith was a giant in law, in civil rights, and in life.” (Rubin).

Born in 1922 in Detroit, Keith graduated high school from Northwestern High School and college from West Virginia State College. He then earned a law degree from Howard University School of Law where he studied under the legendary Thurgood Marshall. He later obtained an LLM (masters of law) from Wayne State University Law School.

For many years he engaged in the private practice of law in Detroit and served as co-chair of the Michigan Civil Rights Commission. In 1967, President Lyndon Baines Johnson nominated him to a federal district court judgeship in the Eastern District of Michigan. He served there for about a decade until President Jimmy Carter elevated him to the Sixth U.S. Circuit Court of Appeals, a court he served on until his death in 2019.

During his long tenure as a federal jurist, Keith authored many First Amendment decisions.

Keith, sitting by designation as a judge on the Sixth Circuit, ruled in Melton v. Young (6th Cir. 1972) that public school officials in Chattanooga, Tennessee, could prohibit a student from wearing a Confederate flag jacket to school, because of serious racial tensions at the school, which had created a substantial disruption of school activities within the meaning of Tinker.

Keith ruled in Parks v. City of Columbus (6th Cir. 2005) that Columbus, Ohio, officials could not prohibit the speech of a religious speaker who wanted to distribute literature at an arts festival. Keith reasoned that city officials could not ban the speaker simply because some found his speech offensive.