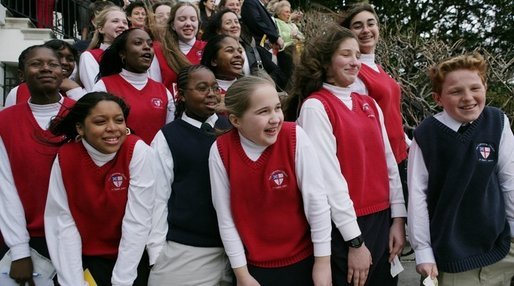 The Supreme Court first talked about the child benefit theory in Cochran v. Board of Education in 1930 when they upheld a Louisiana law allowing the state to give textbooks to students in parochial schools. (Image of parochial school children via Wikimedia Commons, public domain)

In Cochran v. Board of Education, 281 U.S. 370 (1930), the Supreme Court adopted child benefit theory to unanimously uphold a Louisiana law allowing the state to purchase and lend secular textbooks to students in public as well as parochial schools.

Opponents had attacked the law — the brainchild of U.S. senator and former Louisiana populist governor Huey P. Long — as an unconstitutional taking of public property for private purposes and for violating the guaranty clause in Article 4, section 4, of the Constitution.

In the Court’s opinion, Chief Justice Charles Evans Hughes dismissed both arguments made by opponents of the law. In focusing on the first, he quoted the Louisiana Supreme Court’s decision in the case to the effect that the purpose of the law was not to aid private sectarian schools, but to aid children of the state wherever they attended school.

This effectively marked the birth of the child benefit theory, which differentiates between aid going directly to students in parochial schools and that sent directly to the schools.

After the Court used the Fourteenth Amendment to apply the establishment clause of the First Amendment to the states in Everson v. Board of Education (1947), this clause — not the takings and guaranty clauses that opponents pointed to in Cochran — has governed such controversies. The Court would decades later uphold a similar textbook program in New York in Board of Education v. Allen (1968).