By David L. Hudson, Jr.
Other articles in Publishers or Subjects of Attempted Censorship 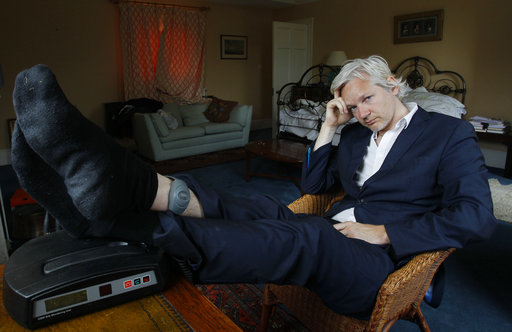 Julian Assange was charged in May 2019 of violation of the Espionage Act for his role in obtaining and publishing classified military and diplomatic material. The press has raised concern about some of the charges in the indictment, specifically the 'pure publication' charges as distinct from the charges that included conspiring with a source or aiding and abetting the illegal acquiition of classified information. (In this 2011 photo, Assange is seen with his ankle security tag at the house where he was required to stay, near Bungay, England. AP Photo/Kirsty Wigglesworth, file, used with permission from The Associated Press.)

Julian Assange is the founder of WikiLeaks, an international non-profit organization that publishes leaks from across the globe.   In the First Amendment world, questions abound as to whether Assange is a journalist or simply the recipient of document dumps.

Questions also surface over whether Assange has violated the Espionage Act, a federal law that generally prohibits the disclosure of U.S. military secrets that could harm national security.

In May 2019, the U.S. government charged Assange with violating the Espionage Act.  He also remains under investigation by the Swedish government on alleged rape charges.  Currently, he is incarcerated in a British jail.

Assange and WikiLeaks have been the source of continuous controversy for years for releasing sensitive information, including sensitive military information and also information from the Hillary Clinton campaign team during the 2016 U.S. Presidential election.

In 2010, WikiLeaks published a series of leaked information about the United States and military operations that it received from former U.S. military intelligence analyst Chelsea Manning, who then was known as Bradley Manning.   Manning provided WikiLeaks with thousands of sensitive military documents – some classified and some unclassified.

For this, the U.S. government prosecuted Manning for violating the Espionage Act.  She served seven years in prison before President Barack Obama commuted her sentence. In 2019, Manning refused to testify before a grand jury about Assange for possible violations of the Espionage Act.

Born in 1971 in Queensland, Australia, Assange studied at Central Queensland University and the University of Melbourne but did not graduate.  In his teen years, Assange — a computer expert — became involved and known for hacking.  He worked as a computer programmer and as an advisor to an Internet service provider.  However, he achieved worldwide fame – and infamy in some quarters – when he started WikiLeaks in 2006.

Prosecution for publishing truthful information about government concerns the press

The New York Times reports that Assange’s prosecution for violating the Espionage Act raises “profound First Amendment issues.”  That is in part because Assange is being punished for something akin to investigative journalism — publishing truthful information about the government.

Gabe Rottman, writing for the Reporters Committee, expressed concern that three of the charges were exclusively for publication of government secrets, an issue surely to concern journalists who publish classified information that they receive lawfully, such as what happened in the Pentagon Papers case.

"This is the first time the Justice Department has ever successfully obtained an indictment from a grand jury with Espionage Act charges based exclusively on the act of publication (what we’re calling 'pure publication' as it is distinct from either conspiring with a source or aiding and abetting the illegal acquisition of classified information)," Rottman writes.