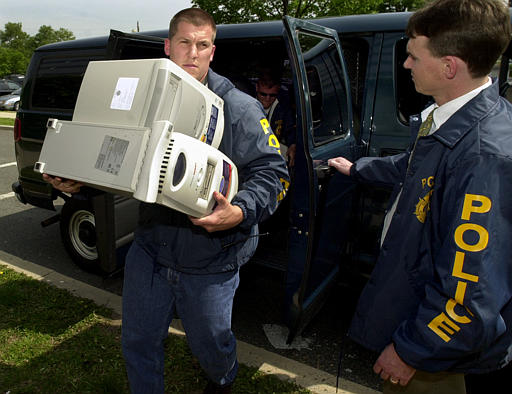 In 2008, the Supreme Court upheld part of a federal child pornography law that criminalized advertising, promoting, presenting or distributing child pornography even if the underlying material does not constitute child pornography. In this photo from 2002, an investigator from the New Jersey Division of Criminal Justice carries computer equipment into the Hughes Justice Complex in Trenton, N.J., as part of a sting operation in which 200 potential suspects were identified as involved in a child pornography Web site. (AP Photo/Daniel Hulshizer, used with permission from The Associated Press.)

In United States v. Williams, 553 U.S. ____ (2008), the Supreme Court upheld part of a federal child pornography law known as the Prosecutorial Remedies and Other Tools to end the Exploitation of Children Today Act of 2003, better known as the PROTECT Act, finding it was not in violation of the First Amendment right to free speech or expression.

A key provision of PROTECT prohibits anyone from advertising, promoting, presenting, or distributing child pornography even if the underlying material does not actually constitute child pornography. It was called the pandering provision in the litigation.

Congress passed the PROTECT Act in response to the Court’s decision in Ashcroft v. Free Speech Coalition (2002), in which the Court struck down two provisions designed to address the evils of virtual child pornography — child pornography created without the use and harm of actual children.

The Williams case involved the prosecution of Michael Williams, who told an undercover Secret Service agent over the Internet that he had sexually explicit pictures of his minor daughter.

A resultant search revealed that Williams indeed possessed numerous examples of child pornography. He was charged both with possession of child pornography and with pandering under the PROTECT Act. He pleaded guilty but reserved the right to challenge the constitutionality of the pandering provision.

A federal district court rejected his challenge, but the Eleventh Circuit Court of Appeals reversed in United States v. Williams (2006), finding that the statute was overbroad and vague.

The Supreme Court reversed the Eleventh Circuit decision and upheld the constitutionality of the law by a 7-2 vote.

To Scalia it did not matter that someone could be criminally charged for bragging that they had child pornography when in actuality they did not possess such material. He analogized situations in which individuals may offer to sell illegal drugs even when they do not possess such contraband: “Offers to deal in illegal products or otherwise engage in illegal activity do not acquire First Amendment protection when the offeror is mistaken about the factual predicate of his offer.”

Scalia also emphasized that a successful overbreadth challenge requires a litigant to show that the law is substantially overbroad — an effort he said that Williams failed to meet. A litigant must show more than “an endless stream of fanciful hypotheticals.” Justice John Paul Stevens — joined by Stephen G. Breyer — wrote a short concurrence, emphasizing that the law should be interpreted to apply to defendants who act with a lascivious purpose.

Souter reasoned that the PROTECT Act criminalized the very type of expression protected in Free Speech Coalition — virtual child pornography that did not involve the actual use of minors or harm to children.

“The tension with existing constitutional law is obvious,” Souter wrote. “Free Speech Coalition reaffirmed that nonobscene virtual pornographic images are protected, because they fail to trigger the concern for child safety that disentitles child pornography to First Amendment protection.” He also warned that the decision “might have an unsettling significance well beyond the subject of child pornography.”

In Free Speech Coalition, the Court had ruled that that virtual pornography did not involve the same harms to children as pornography involving real children. This distinguished it from New York v. Ferber (1982), in which the Court had justified a child pornography exception to the First Amendment’s broad free speech protections based on actual harm to children.