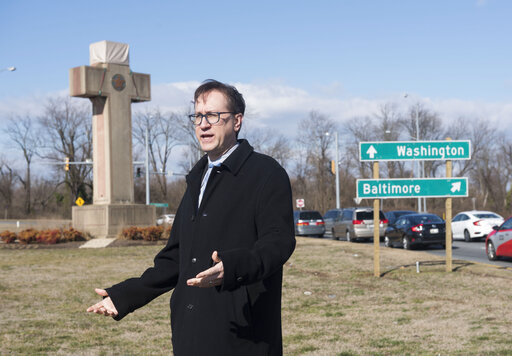 Roy Speckhardt, executive director of the American Humanist Association, speaks near the 40-foot Maryland Peace Cross dedicated to World War I soldiers on Wednesday, Feb. 13, 2019 in Bladensburg, Md.  The American Humanist Association filed a lawsuit alleging the state's maintenance of the cross with public funds violated the establishment clause of the First Amendment. The 4th U.S. Circuit Court agreed, finding that the cross had a primary effect of advancing Christianity.  The U.S. Supreme Court overruled in 2019, concluding the cross did not violate the First Amendment's establishment clause and had acquired many other meanings other than Christianity through the years. (AP Photo/Kevin Wolf, used with permission from The Associated Press.)

In American Legion v. American Humanist Association (2019), the U.S. Supreme Court ruled 7-2 that a longstanding cross in Bladensburg, Maryland, erected to honor slain World War I servicemen from that area does not violate the Establishment Clause of the First Amendment.

The Court emphasized that the cross, while a Christian symbol, had acquired other meanings through the years.

In 1918, residents of Prince George’s County, Maryland, formed a committee to erect a monument honoring the county’s fallen soldiers in World War I.  The completed monument was a 32-foot Latin cross that sits on a large pedestal that reads: “Dedicated to the heroes of Prince George’s County, Maryland who lost their lives in the Great War for the liberty of the world.”

A local post of the American Legion took over the project in 1922 and the monument was completed in 1925. In 1961, the Maryland-National Capital Park and Planning Commission acquired the Cross.  It has spent a considerable amount of money in keeping up the monument.

In 2012, the American Humanist Association complained that the cross’ presence on public land and the Commission’s maintenance of it violated the Establishment Clause.

The American Legion intervened to defend the cross. A federal district court ruled in favor of the government and the American Legion, ruling that the monument served the secular purposes of commemorating World War I and ensuring traffic safety.

On appeal, a divided three-judge panel of the 4th U.S. Circuit Court of Appeals reversed, finding that the cross had the primary effect of advancing Christianity.

On further appeal, the U.S. Supreme Court reversed the 4th Circuit and ruled in favor of the American Legion and the local government.  Writing for the majority, Justice Samuel Alito explained that the Lemon test, the Court’s Establishment Clause test articulated most notably in Lemon v. Kurtzman (1971) and used  by the 4th Circuit below, was not the appropriate test to use for a historical monument.

For example, Alito noted that uncovering the purpose behind a monument was difficult, because “the purposes associated with an established monument, symbol, or practice often multiply.”

Instead, Alito focused on the historical importance of the monument to the local community and its role in commemorating World War I.

“The cross is undoubtedly a Christian symbol, but that fact should not blind us to everything else that the Bladensburg Cross has come to represent,” Alito concluded. “For some, that monument is a symbolic resting place for ancestors who never returned home. For others, it is a place for the community to gather and honor all veterans and their sacrifices for our Nation. For others still, it is a historical landmark.”

Justice Stephen Breyer wrote a short concurring opinion, noting that “[t]he Latin cross is uniquely associated with the fallen soldiers of World War I.”   He concluded that the Latin cross “poses no real threat to the values that the Establishment Clause serves.”

Justices Kavanaugh and Thomas call for abandonment of Lemon test

Justice Brett Kavanaugh also wrote a concurring opinion.  He wrote that “the Lemon test is not good law and does not apply to Establishment Clause cases in any of the five categories.”  The five categories he listed were: “(1) religious symbols on government property; (2) religious accommodations and exemptions from generally applicable laws; (3) government benefits and tax exemptions for religious organizations; (4) religious expression in public schools; and (5) regulation of private religious speech in public forums.”

Justice Elena Kagan wrote a short concurring opinion.  She wrote that the Lemon test still has value in examining the government’s purpose and the effects associated with religious displays.

Justice Clarence Thomas also wrote an opinion, concurring in the judgment.   He once again suggested that the Establishment Clause should not be incorporated to apply to limit state and local governments.  He said that even if the Clause is incorporated, the Latin cross here does not violate it because it does amount to governmental coercion of religion.   Thomas also called for the abandonment of the Lemon test, writing: “I would take the logical next step and overrule the Lemon test in all contexts.”

Justice Neil Gorsuch also concurred in the judgment.  He questioned whether the American Humanist Association had standing to even challenge the cross, writing that “the ‘offended observer’ theory of standing has no basis in law.”  He also called for the abandonment of the Lemon test, writing that it “was a misadventure.”

Dissenters: Cross has not been transformed into secular symbol

Justice Ruth Bader Ginsburg, joined by Justice Sonia Sotomayor, filed the only dissenting opinion.  She emphasized the clear religious significance of the Latin cross and wrote that “using the cross as a war memorial does not transform it into a secular symbol.”