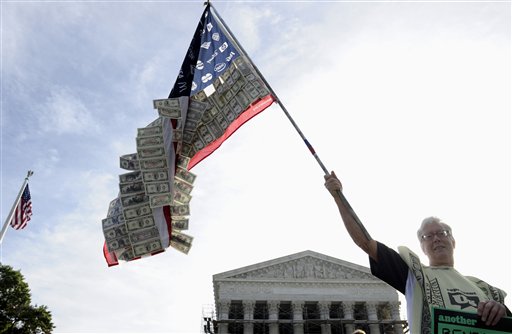 The U.S. Supreme Court in November 2019 vacated a 9th U.S. Circuit Court of Appeals ruling that had upheld campaign contribution limits in Alaska. The Court remanded the case back to the 9th Circuit Court to consider the precedent case of Randall v. Sorrell, in which the Supreme Court invalidated a somewhat similiar law on grounds that the limits violated First Amendment protections for speech. Laws limiting campaign contributions last reached the Supreme Court in arguments in McCutcheon v. FEC in 2013, and this 2013 Associated Press photo of a man holding a flag covered in money and coporate logos is an example of the types of demonstrations that have taken place outside the Supreme Court when campaign finance has been at issue. (AP Photo by Susan Walsh, used with permission from The Associated Press.)

In Thompson v. Hebdon (19 - 122), the U.S. Supreme Court in a per curiam decision vacated a 9th U.S. Circuit Court of Appeals ruling that had upheld an Alaska law limiting political campaign contributions by individuals.

Alaska law limited the amount that individuals could contribute to political candidates for office and to election-oriented groups other than political parties to $500 a year. Aaron Downing and Jim Crawford, Alaska residents, challenged the limits on First Amendment grounds.

On further appeal, the U.S. Supreme Court vacated the decision and sent it back to the 9th Circuit to evaluate the First Amendment claims in light of the Court’s decision in Randall v. Sorrell. In that decision, the Court invalidated a Vermont law that limited contributions to $400 for governor, $300 to a candidate for state senator, and $200 to a candidate for state representative.

In Sorrell, Justice Stephen Breyer wrote in his plurality opinion that “contribution limits that are too low can … harm the electoral process by preventing challengers from mounting effective campaigns against incumbent officeholders, thereby reducing democratic accountability.”

In the instant case, the Court per curiam quoted this passage from Sorrell and noted similarities between the Vermont limits invalidated in Sorrell and the Alaska limits. In its per curiam opinion, the Court noted that Alaska’s contribution limits were substantially lower than those in other states.

The Court concluded that “the case is remanded for [the 9th Circuit] to revisit whether Alaska’s contribution limits are consistent with our First Amendment precedents.”

Justice Ruth Bader Ginsburg issued a “statement” that said she did not oppose the remand for the 9th Circuit to “take account” of Randall v. Sorrell. She noted that “Alaska’s law does not exhibit certain features found troublesome in Vermont’s law.” She also pointed out that Alaska has the second smallest state legislature in the country and obtains 90 percent of its revenue from the oil and gas industry.