By John R. Vile
Other articles in Laws and Proposed Laws, 2008 to present 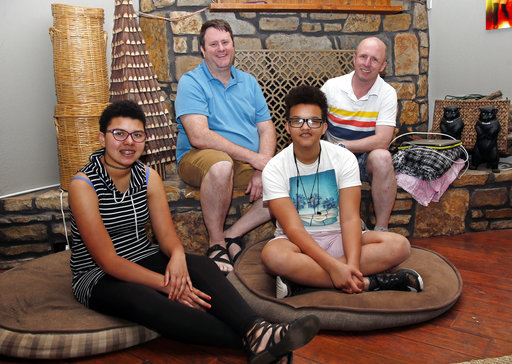 After the Supreme Court ruling requiring states to recognize same-sex marriages, states have had to decide whether to subsidize religious adoption groups that discriminate against same-sex couples. In this photo, same-sex couple Mitch Dailey, rear left, and his husband, Sean Freiley, rear right, pose for a photo with their adopted children, siblings Jasmine Freiley, front left, and Jerimiah McWilliams, in Bethany, Oklahoma in 2018. (AP Photo/Sue Ogrocki, used with permission from the Associated Press)

Some of the most difficult cases that have come before courts in recent years involve potential conflicts between First Amendment religious rights and the right to equal protection under the Fourteenth Amendment.

Religous groups have won exemptions to laws due to First Amendment

In Burwell v. Hobby Lobby, 573 U.S. ____ (2014), the U.S. Supreme Court ruled that the Religious Freedom Restoration Act (RFRA) of 1993, which has subsequently been supplemented with the Religious Land Use and Institutionalized Persons Act (RLUIPA),  exempted a closely held for-profit corporation from providing contraceptives under the Affordable Care Act when such provision violated the owners’ religious beliefs.

Now that the Supreme Court has decided in Obergefell v. Hodges, 576 US. ____ (2015), that the equal protection and due process clauses of the Fourteenth Amendment require states to recognize same-sex marriages, states must decide whether continuing to provide subsidies to such religious groups constitutes a form of state action that violates the equal protection and/or due process clauses.

An increasing number of states have adopted legislation under RFRA seeking to exempt such adoption agencies from otherwise applicable equal protection requirements.

Decreasing the number of couples who can foster or adopt children by excluding LGBTQ couples make adopting children, many with special needs, more difficult.  If well-established religious-based agencies close (as some have already done) rather than comply with same-sex equal protection requirements, this also adversely affects adoption rates.  Although the Attorney General of Michigan recently came to an agreement that faith-based agencies can no longer reject adoptions by LGBTQ couples in that state (Moreau 2019), many others states have adopted or are considering adopting laws that permit exemptions of such adoptions for religiously based groups.

Another possibility, similar to solutions that apply to individuals under the GI Bill of education who can use such aid to pursue theological education, might be a voucher system, which prospective parents could use for adoption services, religious or secular, of their choice (“Adoption and the Anti-discrimination Wars”).

John Vile is a professor of political science and dean of the Honors College at Middle Tennessee State University. He is co-editor of the Encyclopedia of the First Amendment. This article was published Jan. 23, 2020..