By Robert A. Kahn
Related cases in Church Property and Governance 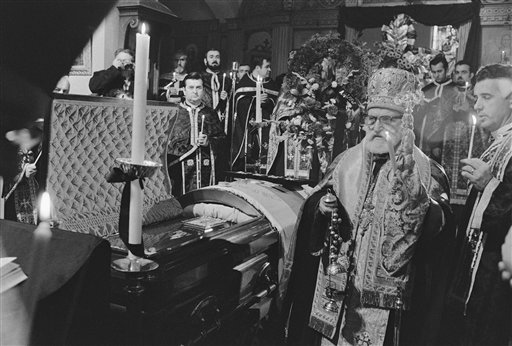 In a case involving the removal of Bishop Dionisije Milivojevich from his post as head of diocese of the Serbian Eastern Orthodox Diocese of United States and Canada, the Supreme Court ruled in 1976 that the First Amendment prevented the state from becoming entangled in decisions reached by the highest authorities of hierarchical churches. In this 1970 photo, Milivojevich officiates funeral services for former King Peter II near Libertyville, Ill. (AP Photo/Fred Jewell, used with permission from the Associated Press)

Milivojevich removed as head of diocese

The case involved the Serbian Eastern Orthodox Diocese for the United States and Canada. The diocese has its own constitution and decision-making authorities — the Holy Assembly of Bishops and Holy Synod.

The case involved the removal of a bishop, Dionisije Milivojevich, from his post as head of the diocese and the division of the diocese into three subunits.

Milivojevich sued in Illinois state court to reverse the church’s ruling on the ground that the Holy Assembly and Holy Synod acted “arbitrarily” by exceeding the scope of their authority under church law. After protracted litigation, the Illinois Supreme Court agreed and reinstated Milivojevich.

On appeal, the Supreme Court reversed.

Justice William J. Brennan Jr., writing for the majority, reasoned that review of church decisions posed a great risk “that the State will become entangled in religious controversies.”

Brennan also relied on Watson v. Jones (1871). In Watson, the Court held that in forming churches people had the right to establish ecclesiastical tribunals. Tribunals would be meaningless, however, if church members could review ecclesiastical decisions in civil court.

Although the Court, in Gonzalez v. Archbishop (1929), had suggested in dicta that the ban on reviewing church proceedings would not apply in cases involving “fraud, collusion or arbitrariness,” Justice Brennan held that the “arbitrariness” exception violated the First Amendment because it “inherently” required an inquiry into church procedures or substantive church law.

Justice William H. Rehnquist, writing in dissent, argued that the state should be able to hear cases involving religious disputes so long as it does “not displace the free religious choices of its citizens by placing its weight behind a particular religious belief, tenet or sect.”

Serbian Eastern Orthodox Diocese marked a further step in the development of the idea that courts should keep out of religious controversies. The concern with entanglement has also led lower courts to bar tort claims arising out of religious proceedings.