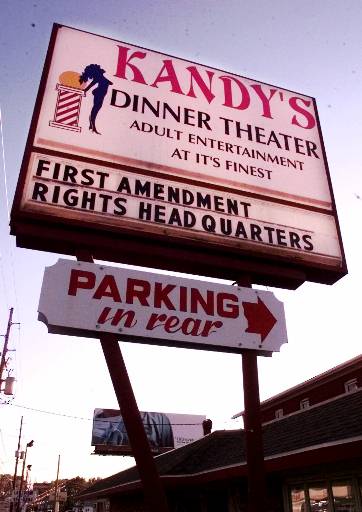 The Supreme Court ruled in Barnes v. Glen Theatre, Inc., 501 U.S. 560 (1991), that the state of Indiana could regulate totally nude dancing without violating the First Amendment, even though such performance dancing constituted expressive conduct. This decision was affirmed in City of Erie v. Pap’s A.M. (2000), which also upheld a public nudity ordinance. In this photo, a sign outside Kandy's, the only club in Erie, Pa. featuring all-nude dancers, and the club involved in Erie v. Pap’s A.M., declares that they are also the "First Amendment Rights Headquarters," Oct. 15, 1999. (AP Photo/Gene J. Puskar, used with permission from the Associated Press)

In a 5-4 decision announced by Chief Justice William H. Rehnquist, the Supreme Court ruled in Barnes v. Glen Theatre, Inc., 501 U.S. 560 (1991), that the state of Indiana could regulate totally nude dancing without violating the First Amendment, even though such performance dancing constituted expressive conduct.

Indiana made nudity in a public place a misdemeanor

The case came before the Court on writ of certiorari after two entertainment establishments and the dancers they employed sought an injunction to stop enforcement of an Indiana public indecency statute that made nudity in a public place a misdemeanor. The statute defined "nudity" in a way that required female dancers to wear G-strings and pasties.

All members of the Court except Justice Antonin Scalia found nude dancing performed as entertainment to be expressive conduct for purposes of the First Amendment. Chief Justice Rehnquist treated the regulation of nude dancing as subject to time, place, and manner restrictions requiring application of the four-part test for symbolic speech that the Court articulated in United States v. O’Brien (1968).

In applying the O’Brien test, Chief Justice Rehnquist found that Indiana’s public-decency statute was clearly within the constitutional power of the state. It also advanced the substantial government interest in protecting societal order and morality, which was well within the traditional police power of the state to provide for the public health, safety, and morals.

Justice Scalia concurred by arguing that the Indiana law regulated conduct, not expression, and should therefore be upheld as a rational method to achieve the state’s purpose of establishing moral standards.

Justice David H. Souter concurred, but he found the state interest justifying the statute was in combating the harmful secondary effects — such as prostitution and other criminal activity — of live nude dancing in adult entertainment establishments. Later, Souter’s opinion achieved prominence in this area because it was the narrowest opinion of the justices in the majority. Justice Byron R. White’s dissent emphasized his view that the First Amendment protected nonobscene nude dancing.