By John Vile
Related cases in Civil Rights Movement and the First Amendment, Trespassing and Sit-ins 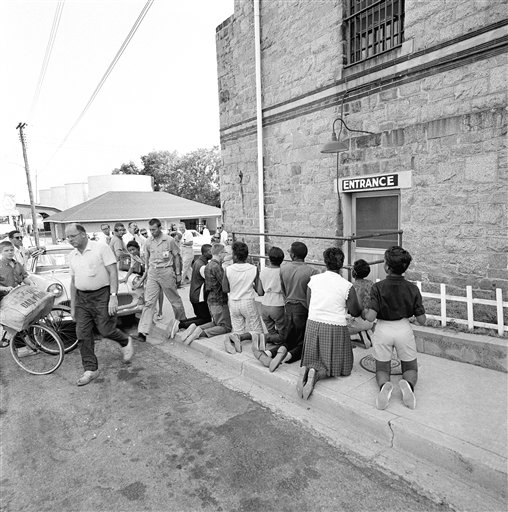 In this photo, a group of demonstrators kneel outside a  Maryland jail in 1963 to protest imprisonment of fellow demonstrators. In Adderley v. Florida (1966), the Supreme Court said demonstrators blocking a jail could be arrested without violating their First Amendment rights. (AP Photo, used with permission from the Associated Press)

In Adderley v. Florida, 385 U.S. 39 (1966), the Supreme Court found no violation of federal law or of the First Amendment in the arrest of students demonstrating against segregation at a county jail in Florida and against the arrest of other protestors.

In Leon County, Florida, a jury had found Harriett Louise Adderly and 31 other persons guilty of “trespass[ing] with a malicious and mischievous intent” upon the premises of the county jail contrary to Florida law. Those convicted had gone to the jail, along with other students, to protest the arrests the day before of other demonstrating students and to protest more generally against practices of racial segregation, including at the jail.

When the students blocked a driveway used in transporting prisoners and providing services to the jail, the county sheriff unsuccessfully tried to persuade the students to leave the jail grounds. He then informed those who remained that they would be arrested for trespassing.

Court ruled blocking a jail driveway can be criminal trespass

The Court ruled 5-4 in upholding the jury’s verdict.

Writing for the majority, Justice Hugo L. Black began by explaining that unlike breach of the peace convictions — based on common law precedents and invalidated in Edwards v. South Carolina (1963) and Cox v. Louisiana (1965) — the Florida statute was not unconstitutionally vague. Rather, the Florida law specifically defined under what conditions a person would be considered to have committed a criminal trespass. Furthermore, the property on which the trespass had occurred was not one traditionally open to the public; it surrounded a jail, for which there were security concerns.

Black then made it clear that petitioners’ actions were likewise not protected by the Civil Rights Act of 1964, which forbids prosecutions for individuals seeking to obtain services by covered entities, because they were not seeking services for anything covered by the act. Furthermore, adequate evidence disproved a lack of due process granted to the petitioners.

Court said there was no First Amendment violation

Black also determined there to have been no violation of the First Amendment because no evidence pointed to the sheriff objecting to what was being sung or said by the demonstrators or his disagreeing with the objectives of their protest. In the Court’s opinion, the sheriff only sought to ensure the continued security and functioning of the jail. Black concluded by making it clear that governments had the power to preserve property under their control for their lawful purposes.