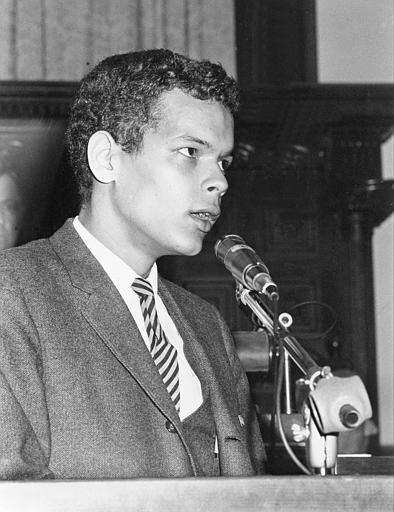 The Supreme Court’s decision in Bond v. Floyd, 385 U.S. 116 (1966) — that legislators do not forfeit their constitutional rights to speak out on public issues — reaffirmed the principle that the First Amendment protects controversial political speech, even speech critical of the country’s war effort. The case involved U.S. rep.-elect Julian Bond, who was denied his seat in the Georgia House of Representatives after endorsing a press release that criticized the Vietnam War. In this photo, Floyd testifies at a legislative hearing before a Special Committee in Atlanta, Ga., Jan. 10, 1966. (AP Photo, used with permission from the Associated Press)

The Supreme Court’s decision in Bond v. Floyd, 385 U.S. 116 (1966) — that legislators do not forfeit their constitutional rights to speak out on public issues — reaffirmed the principle that the First Amendment protects controversial political speech, even speech critical of the country’s war effort.

In June 1965 Julian Bond was elected to a seat in the Georgia House of Representatives, becoming one of the first six African-Americans elected to that body since Reconstruction. A few months later, the Student Nonviolent Coordinating Committee (SNCC), a civil rights group in which Bond served as the communications director, issued a press release criticizing U.S. involvement in the Vietnam War and the draft law.

Although Bond did not write the release, he endorsed it in a news interview, stating, "I don’t think that I, as a second-class citizen of the United States, have a requirement to support that war.” He described himself as a pacifist who opposed all war, but he did not see that as an issue that should prevent him from taking his oath of office.

State house tried to exclude congressman for his comments

Other members of the Georgia House disagreed, however, and filed challenges to Bond’s right to be seated. He was not permitted to take the oath. After a House hearing, Bond’s colleagues, led by Rep. James “Sloppy” Floyd, voted 184-12 to exclude Bond for his comments, which they argued were not consistent with a legislator’s oath of support for the Constitution.

Bond filed a lawsuit in federal court, contending that the move to expel him because of his political speech violated his First Amendment rights. A divided three-judge district court rejected his claim by a 2-1 vote, reasoning that Bond’s free-speech rights as a citizen were limited to a degree by his taking a seat in the Georgia House of Representatives and the mandatory oath.

Bond appealed to the Supreme Court, which unanimously reversed in an opinion written by Chief Justice Earl Warren. Attorneys for Floyd had contended that Bond’s statements on the war called into question whether he could in good faith take the oath of office.

Warren’s opinion provided broad free-speech protection for legislators’ political speech. “The manifest function of the First Amendment in a representative government requires that legislators be given the widest latitude to express their views on issue of policy,” Warren wrote. “Just as erroneous statements must be protected to give freedom of expression the breathing space it needs to survive, so statements criticizing public policy and the implementation of it must be similarly protected.”