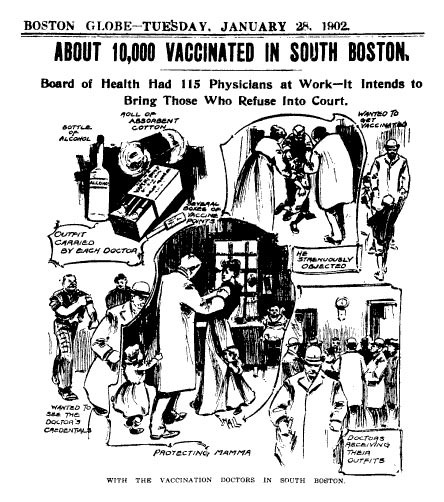 This illustration is from the Boston Globe, January 28, 1902 as the state moved to vaccinate its citizens for smallpox. Massachusetts law required smallpox vaccination to prevent the disease's spread. A pastor challenged the law, saying it violated his religious rights under the First Amendment. The U.S. Supreme Court ruled in 1905 in Jacobson v. Massachusetts that Jacobson's religious rights had to give way to the common good, and that the emergency situation justified the government's action. (Image, public domain)

In Jacobson v. Massachusetts (1905), the Supreme Court upheld a state’s mandatory compulsory smallpox vaccination law over the challenge of a pastor who alleged that it violated his religious liberty rights.

Pastor Henning Jacobson contended that he had a right under the Free Exercise Clause of the First Amendment to avoid the mandatory vaccination law.

The U.S. Supreme Court, in an opinion by Justice John Marshall Harlan I, ruled that the state of Massachusetts acted constitutionally within its police powers to pass a law to protect the health and safety of the public.

“According to settled principles, the police power of a State must be held to embrace, at least, such reasonable regulations established directly by legislative enactment as will protect the public health and the public safety,” Harlan wrote.

Jacobson argued that the smallpox vaccination law not only infringed on his religious liberty but also was arbitrary and capricious.    The Court disagreed, writing that Jacobson’s individual right must give way to the “common good.”

Harlan explained: “But the liberty secured by the Constitution of the United States to every person within its jurisdiction does not import an absolute right in each person to be, at all times and in all circumstances, wholly freed from restraint. There are manifold restraints to which every person is necessarily subject for the common good.”

The Jacobson decision has come back into prominence in First Amendment jurisprudence, as many courts have cited the decision when confronting First Amendment challenges to various executive orders and edicts passed in the wake of the pandemic caused by the Coronvirus known as COVID-19.

David L. Hudson, Jr. is a First Amendment Fellow at the Freedom Forum Institute and a law professor at Belmont University who publishes widely on First Amendment topics. This article was published June 3, 2020.