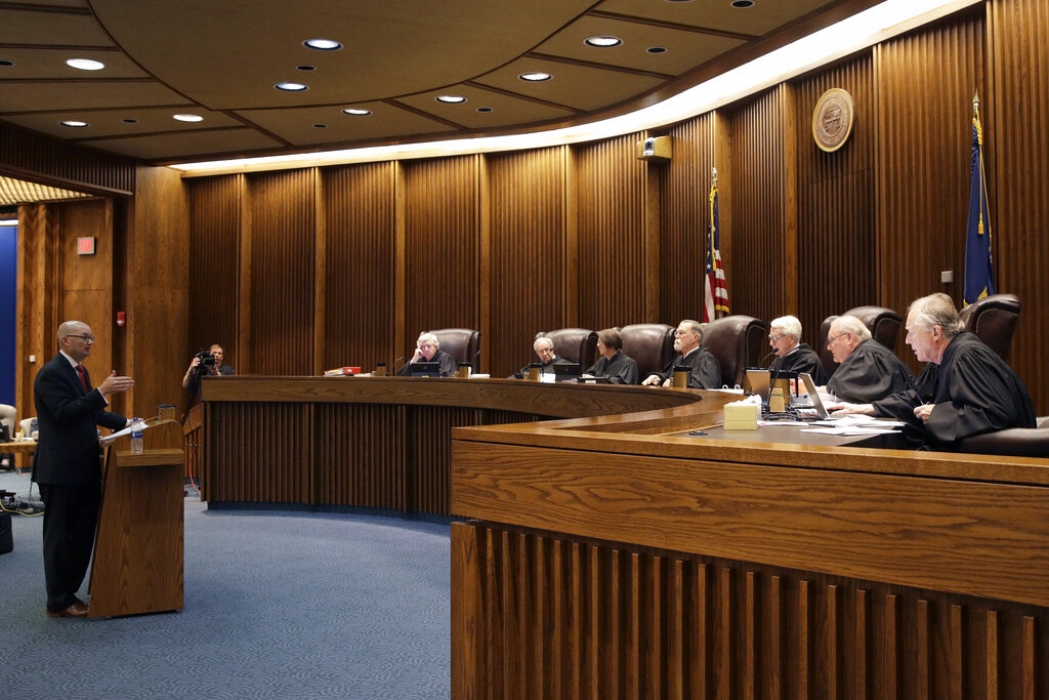 The Kansas Supreme Court (pictured above) in 2019 threw out two convictions of individuals who had threatened others, ruling that the law used to convict them was unconstitutional under free speech rights in the First Amendment. The state asked the U.S. Supreme Court to review the cases, but the Court declined in 2020. However, Justice Clarence Thomas dissented from the denial of certiorari, arguing that the high court should take up the case to clear up confusion over its rulings on what constitutes true threats unprotected by the First Amendment. (Photo of Kansas Supreme Court from May 2019 hearing arguments in an unrelated case. AP Photo/Charlie Riedel)

The U.S. Supreme Court declined to review two decisions from the Kansas Supreme Court that had invalidated two true-threat convictions when it ruled the law used to convict the individuals was unconstitutional under the First Amendment.

However, Justice Clarence Thomas dissented from the denial of certiorari, arguing that the high court should take up the case because the Court’s ruling in Virginia v. Black (2003) contained language about unprotected true threats that has been interpreted differently by lower courts.

The Kansas cases involved Timothy Boettger who told a man that he hoped his dad would end up in a ditch and Ryan Johnson who told his mother he wished she would die.  However, defense attorneys in the cases contended the convictions could not stand, because the Kansas law in question did not comport with the First Amendment because it lacked a requirement of a higher level of intent on the part of the speaker consistent with the decision in Virginia v. Black.

The Kansas true threat statute criminalized threats to “[c]ommit violence . . . in reckless disregard of the risk of causing . . . fear.”

In Black, the Court examined a Virginia law criminalizing the burning of crosses with an intent to intimidate others.  The Court in Black wrote that “‘[i]ntimidation in the constitutionally proscribable sense of the word is a type of true threat, where a speaker directs a threat to a person or a group of persons with the intent of placing the victim in fear of bodily harm or death.”

After Black, some courts have required that a defendant have the specific intent to cause bodily harm or death to others.  Other courts have permitted a defendant to be convicted for making reckless threats.

The state of Kansas petitioned the U.S. Supreme Court for review, but the Court denied review on June 22, 2020.

Thomas, in his opinion dissenting from the denial of certiorari, wrote: “In my view, the Constitution likely permits States to criminalize threats even in the absence of any intent to intimidate . It appears to follow that threats of violence made in reckless disregard of causing fear may be prohibited.”

The Court’s ultimate originalist, Thomas noted that it was likely that the Founding Fathers would have considered reckless threats a form of unprotected speech.

He also noted that the Kansas Supreme Court decision conflicted with similar decisions from the state high courts of Connecticut and Georgia, creating a split.  “This split regarding the mental state required by the First Amendment for these offenses will only deepen with time,” he added.