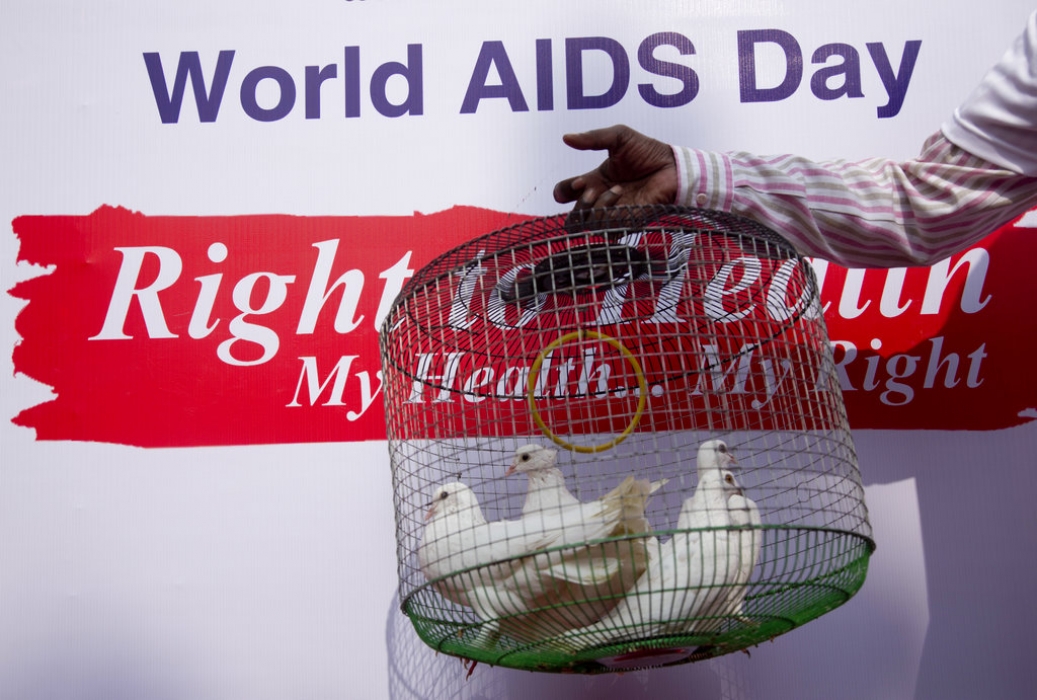 A 2003 law under which the government has funded efforts to fight AIDS both domestically and internationally was challenged for a provision that restricted money to organizations that explicitly opposed prostitution and sex trafficking. In 2013, the Supreme Court said because the provision conditioned funding on the affirmation of a belief, it was a violation of the First Amendment as it applied to American organizations. But in 2020, the Court ruled that the same First Amendment protection did not apply to foreign organizations. (In this photo, an Indian volunteer holds a cage of pigeons before releasing them during an awareness procession to mark the World AIDS Day in Hyderabad, India, Friday, Dec. 1, 2017. World AIDS Day is observed every year to raise people's awareness in the fight against HIV. AP Photo/Mahesh Kumar A.)

In Agency for International Development v. Alliance for Open Society International, Inc. II, the U.S. Supreme Court ruled 5-3 that foreign organizations did not have a First Amendment right to challenge a congressional provision prohibiting U.S. funding to organizations without a “policy explicitly opposing prostitution and sex trafficking.”

The Court reasoned that foreign groups do not have a right to assert rights under the U.S. Constitution.

Several groups, including the Alliance for Open Society International, challenged the constitutionality of the Policy Requirement, arguing that the government violated the First Amendment by conditioning a benefit on the basis of violating freedom of speech.  These groups felt that to be more effective with fighting AIDS and HIV, they needed to be neutral toward prostitution to ensure their full participation in these efforts in different parts of the world.

In 2013, the Supreme Court ruled in Agency for International Development v. Alliance for Open Society International I that this requirement violated the First Amendment as applied to American organizations.

After this ruling, the Alliance for Open Society International and other groups returned to court, arguing that the Policy Requirement also violated foreign affiliates.   A federal district court and a divided panel of the 2nd U.S. Circuit Court of Appeals agreed and prohibited enforcement of the Policy Requirement to foreign affiliates and organizations.

The government appealed to the U.S. Supreme Court, which granted review.

The majority, in an opinion by Justice Brett Kavanaugh, noted that “it is long settled as a matter of American constitutional law that foreign citizens outside U.S. territory do not possess rights under the U.S. Constitution.”  He also noted that  separately incorporated organizations are separate legal units with distinct rights and, thus, that “foreign affiliates were incorporated in other countries and are legally separate from plaintiff’s American organizations.”

According to Kavanaugh, these “bedrock principles of American constitutional law and American corporate law together lead to a simple conclusion: As foreign organizations operating abroad, plaintiffs’ foreign affiliates possess no rights under the First Amendment.”

Kavanaugh rejected the notion that the Policy Requirement amounted to a form of unconstitutional compelled speech.  “No compulsion is present here,” he wrote, adding later that “plaintiffs’ current affiliations with foreign organizations are their own choice, not the result of any U.S. Government compulsion.”

Justice Clarence Thomas wrote a concurring opinion, agreeing with the result of the majority but reiterating his view that the Court’s 2013 decision was erroneous.  “The Policy Requirement does not violate the First Amendment, regardless of whether it is applied to respondents, respondents’ legally distinct foreign affiliates, or any other organization.”

Justice Stephen Breyer, joined by two other justices, wrote a dissenting opinion.  He wrote that the case was not about the rights of foreign organizations but about “the First Amendment rights of American organizations.”   He viewed the majority’s line-drawing between domestic and foreign affiliates with the same messages as overly formalistic.

“Thus, in the First Amendment context, the corporate veil is not an iron curtain,” he wrote. “Just the opposite.  We attribute speech across corporate lines all the time.”   He concluded that the majority’s decision “weakens the marketplace of ideas at a time when the value of that marketplace for Americans, and for others, reaches well beyond our shores.”