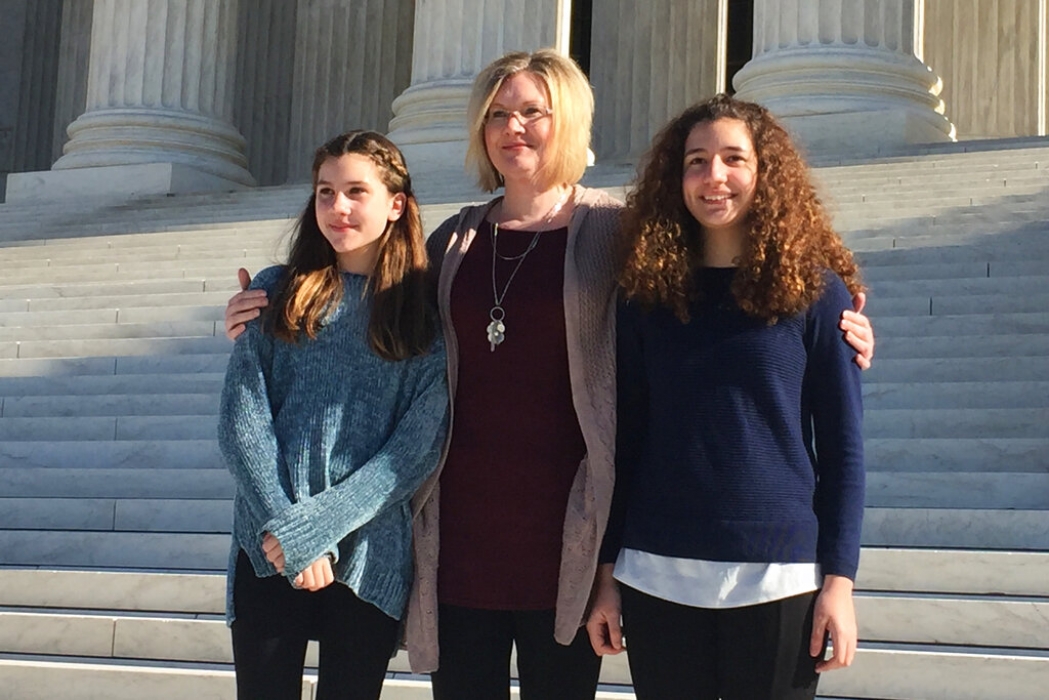 Kendra Espinoza of Kalispell, Montana, center, stands with her daughters Naomi and Sarah outside the U.S. Supreme Court, Wednesday, Jan. 22, 2020 in Washington. Espinoza was the lead plaintiff in Espinoza v. Montana Department of Revenue that sought to make it easier to use public money to pay for religious schooling in many states. Espinoza's daughters attend the Stillwater Christian School in Kalispell, near Glacier National Park. (AP Photo/Jessica Gresko)

Few cases better embody potential tensions between the free exercise and establishment clauses of the First Amendment than the case of Espinoza v. Montana Department of Revenue, 591 U.S. ____ (2020).

It involved a Montana Department of Revenue rule prohibiting the use of a state scholarship fund, to which donors had received tax credits, for students attending private parochial schools. It had done so on the basis of a state constitutional provision barring government aid to any school “controlled in whole or in part by any church, sect, or denomination.” After a trial court enjoined this rule, the Montana Supreme Court ruled that the resulting aid to support students attending parochial schools was unconstitutional and voided the law in its entirety.

Citing Trinity Lutheran Church of Columbia, Inc. v. Comer, 582 U.S. ____ (2017), which had ruled that the free exercise clause prohibited a state from excluding aid for playground renovations for religious day care centers, Roberts had to decide whether the free exercise clause also negated the state no-aid provision. In deciding that it did so, Roberts distinguished this case from Locke v. Davey, 540 U.S. 712 (2004), which had allowed a state to restrict use of public scholarships to study theology in college, by arguing that the Espinoza case “turns expressly on religious status and not religious use.” It thus imposed a special burden on parents who sought to send their children to parochial schools that it did not impose on others.

In cases where states treated people differently because of their religious beliefs, Roberts said that the Court must apply “strict scrutiny,” which Montana could not meet in this case.

State cannot disqualify some private schools because they are religious, Robert wrote

He further cited cases Wisconsin v. Yoder, 406 U.S. 205 (1972) and Pierce v. Society of Sisters, 268 U.S. 510 (1925), in which the Court had recognized the right of parents to educate their children religiously. He argued that, in contrast to precedents that mitigated against funding theological studies like the program in Locke v. Davey, “in the founding era and the early 19th century, governments provided financial support to private schools, including denominational ones.” Roberts observed that “A State need not subsidize private education. But once a State decides to do so, it cannot disqualify some private schools solely because they are religious.”

There were a number of concurring and dissenting opinions. As in many previous cases, Justice Clarence Thomas repeated his view that the establishment clause did not apply to the states.

Picking up on a point raised in Roberts’ majority opinion, Justice Samuel Alito further tied the no-aid provision of the Montana Constitution to nineteenth-century Blaine amendments, which were often motivated by anti-Roman Catholic bias. Alito saw the scholarships as a way to even the playing field so that parents of modest means could also send their children to the schools of their choice.

In a separate concurring opinion, Justice Neil Gorsuch expressed discomfort with the majority opinion’s distinction between religious status rather than use, believing that the free exercise clause protected both.

Justice Ruth Bader Ginsburg wrote a dissenting opinion arguing that since the Montana Supreme Court had voided the law in its entirely, it no longer discriminated against anyone.

In a separate partial dissent, Justice Stephen Breyer argued that the majority went too far in interpreting the free exercise clause to prevent a state from drawing “any distinction between secular and religious uses of government aid to private schools that is not required by the Establishment Clause.” He thought there was sufficient “play in the joints” to permit, while not requiring, Montana to distinguish between aid to parochial and non-parochial schools. He accordingly interpreted the decision in Locke v. Davey differently.

In her dissent, Justice Sonia Sotomayor agreed with Justice Ginsburg in thinking that the state court’s invalidation of the law made the case moot, but she further thought that a state could enact an education tax credit for those who donated to scholarship funds, without requiring them to use such fund to subsidize parochial schools in the process. She further questioned the wisdom of the Court’s decision in the Trinity Lutheran case. She concluded that the court was improperly requiring the reinstatement of “a tax-credit program that the Constitution did not demand in the first place.”

This article was published July 1, 2020. John R. Vile is a professor of political science and dean of the Honors College at Middle Tennessee State University. He is co-editor of the Encyclopedia of the First Amendment.