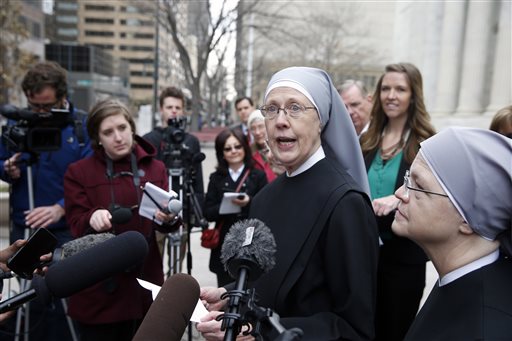 The Roman Catholic nuns, Little Sisters of the Poor, challenged a requirement to provide health insurance coverage for contraceptives, and eventually, the government agency in charge of the program created an exemption that would cover organizations like Little Sisters who objected on moral grounds. Two states challenged the broader exemption and were ultimately unsuccessful in 2020. In this file photo, Sister Loraine Marie Maguire, of Little Sisters of the Poor, speaks to members of the media after attending a hearing in the 10th U.S. Circuit Court of Appeals in 2014. (AP Photo/Brennan Linsley, used with permission from the Associated Press)

Ever since the adoption of the Patient Protection and Affordable Care Act of 2019 (ACA), often known as Obamacare, questions have arisen with respect to the duty of employers to fund contraceptive coverage if such coverage is contrary to their religious beliefs. This was the issue the U.S. Supreme Court addressed in Little Sisters of the Poor Saints Peter and Paul, Home, v. Pennsylvania, 591 U.S. ____ (2020).

The ACA originally permitted the Health Resources and Services Administration (HRSA) to exempt churches from providing such coverage. In Burwell v. Hobby Lobby Stores, Inc., 573 U.S. 682, the U.S. Supreme Court further ruled that the Religious Freedom Restoration Act (RFRA), which had required that courts utilize strict scrutiny of laws that restricted religious freedom, required that closely held corporations like Hobby Lobby with religious objections to such coverage were also exempt from this requirement.

The HRSA subsequently extended this exemption to all employers, including those like the Little Sisters, who objected to such coverage on moral grounds. Pennsylvania and New Jersey challenged this broader exemption as being substantively beyond the scope of the government agency's authority and for having been promulgated without proper procedures.

The Supreme Court on July 8, 2020, rejected that challenge in a 7-2 vote and upheld the broader exemption.

In the case at hand, the Little Sisters of the Poor, consisting of Roman Catholic nuns who ministered to the elderly, had challenged an earlier accommodation. It had provided that if they certified their objections, the government would allow their insurance carriers to provide such coverage directly to their employees rather than through their employers. The Little Sisters still believed that such a certification and its workaround required them to be complicit in a scheme that violated their religious beliefs. After the U.S. Supreme Court remanded an earlier appeal on this issue, the HRSA broadened its definition of those who could assert a moral exemption to include groups like the Little Sisters, but a U.S. district court issued an injunction against enforcement of this rule, and the U.S. Third Circuit Court affirmed its judgment that the HRSA had exceeded its authority.

Justice Clarence Thomas wrote the decision on behalf of the Court majority, relying chiefly on the language of the ACA. Although Congress had not specifically provided for contraceptive coverage in the original act, it had specified that the law would provide women with “such additional preventive care and screenings . . . as provided for in comprehensive guidelines supported by [HRSA].”  As Thomas read this provision, it entrusted the HRSA with “virtually unbridled discretion to decide what counts as preventive care and screenings.” Moreover, “the same capacious grant of authority that empowers HRSA to make these determinations leaves its discretion equally unchecked in other areas, including the ability to identify and create exemptions from its own Guidelines.”

Thomas noted that, in adopting its healthcare insurance, Congress made no attempt to circumvent RFRA. Thomas further believed that the HRSA had given adequate notice of its rule and that, given the breadth of its mandate, it was under no obligation to establish that it had kept an open mind on the subject.  Thomas expressed concern that lawsuits had required the Little Sisters of the Poor to litigate as long as it had in order to affirm the group’s religious liberty.

Justice Samuel Alito filed a concurring opinion, joined by Justice Neil Gorsuch, in which he would have ruled that only that the HRSA had the authority to issue the exemption that it did but that it was compelled to do so under the broad protections for religious liberty provided by the Religious Freedom Restoration Act.

It was the duty of administrative agencies to accept sincerely held religious views that laws violated their conscience rather than treating them with penalties. Otherwise, “the accommodation demanded that parties like the Little Sisters engage in conduct that was a necessary cause of the ultimate conduct to which they had strong religious objections.” He compared the situation to that of conscientious objectors to military service.

The fact that Congress had not mandated contraceptive coverage for all American women further indicated that it did not consider such coverage as a “compelling state interest.”  Moreover, if it did, it could provide such coverage on its own without demanding that groups like the Little Sisters compromise their convictions.

Justice Elena Kagan filed another concurring opinion, joined by Stephen Breyer. Although Kagan did not find the plain words of the ADA as compelling as did the majority, she believed that the history of the act had recognized that it had broad discretion in implementing the law and creating exceptions to it. She did, however, think that the new rules were overly broad in that they applied to organizations that had previously been content to allow private insurers to provide such coverage.

Justice Ruth Bader Ginsburg filed the sole dissent, which was joined by Justice Sonia Sotomayor. Ginsberg believed the majority decision was unbalanced in that it allowed the religious beliefs of some “to overwhelm the rights and interests of others who do not share those beliefs” thus defeating the “seamless” system that Congress had created to do so. She believed that between 70,550 and 126,400 women would lose coverage under this rule.

She further thought that the original regulation had permitted “adequate accommodation rather than an exemption.” Although the government had the right to “’accommodate religion beyond free exercise requirements’ . . . when it does so, it may not benefit religious adherents at the expense of the rights of third parties.”  Although Ginsburg said that she did not doubt the sincerity of the Little Sisters’ beliefs, she reiterated that the prior accommodation “does not substantially burden objectors’ religious exercise.”