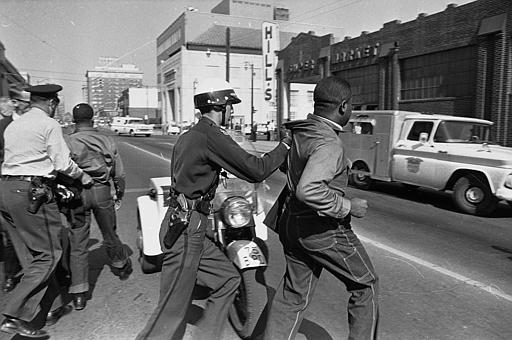 Rev. Martin Luther King, Jr., left, and Rev. Ralph Abernathy, right, leaders of the civil rights movement, are seen being hauled off to a paddy wagon by police following a demonstration in Birmingham, Alabama, 1963. The city had an injunction to stop the protest, which the protesters ignored, leading to a case that reached the Supreme Court, Walker v. City of Birmingham (1967). In this case, the Court refused to look at the constitutionality of the injunction and upheld the protestors' conviction. (AP Photo/Horace Cort, used with permission from the Associated Press)

In Walker v. City of Birmingham, 388 U.S. 307 (1967), the Supreme Court held that protesters who deliberately violate an injunction without first seeking to have it modified cannot attack its constitutionality during a trial for violating the order.

In 1963, Birmingham’s ordinances required parade permits, which were to be issued by the city commission “unless in its judgment the public welfare, peace, safety, health, decency, good order, morals or convenience require that it be refused.”

Upon learning that the group planned marches on Good Friday and Easter Sunday to protest racial segregation and violence, the city sought an injunction from the circuit court to prevent a violation of the parade ordinance. The court entered the injunction ex parte (that is, without notice to the 133 people named in the injunction).

The civil rights demonstrators marched without a permit although they knew of the injunction; eight African American ministers, including Wyatt Tee Walker and King, were arrested and later convicted of contempt of court. Neither the circuit court nor the appellate court would consider the legality of the ordinance or the injunction.

The Supreme Court, in an opinion by Justice Potter Stewart, asserted that there were “substantial constitutional issues concerning some of [the ordinance’s] provisions,” as well as with the broad terms of the injunction. The way to challenge those provisions was by bringing a suit, however, not by violating the ordinance and the injunction, Stewart wrote.

Four justices dissented. In the three separate opinions, Chief Justice Earl Warren, Justice William O. Douglas, and Justice William J. Brennan Jr. argued that the decision in Howat v. Kansas (1922) — upholding the conviction of union leaders who had failed to heed a state subpoena and a strike injunction — did not apply in cases where the court issuing the injunction was violating another law or the First Amendment.

This article was originally published in 2009. Edward Still has practiced in Alabama and Washington, D.C., since 1971. He has brought numerous First Amendment, due process, and equal protection suits for a variety of people:  public employees, playwrights, religious and political minorities, and even truckers over state regulation of bumper stickers.