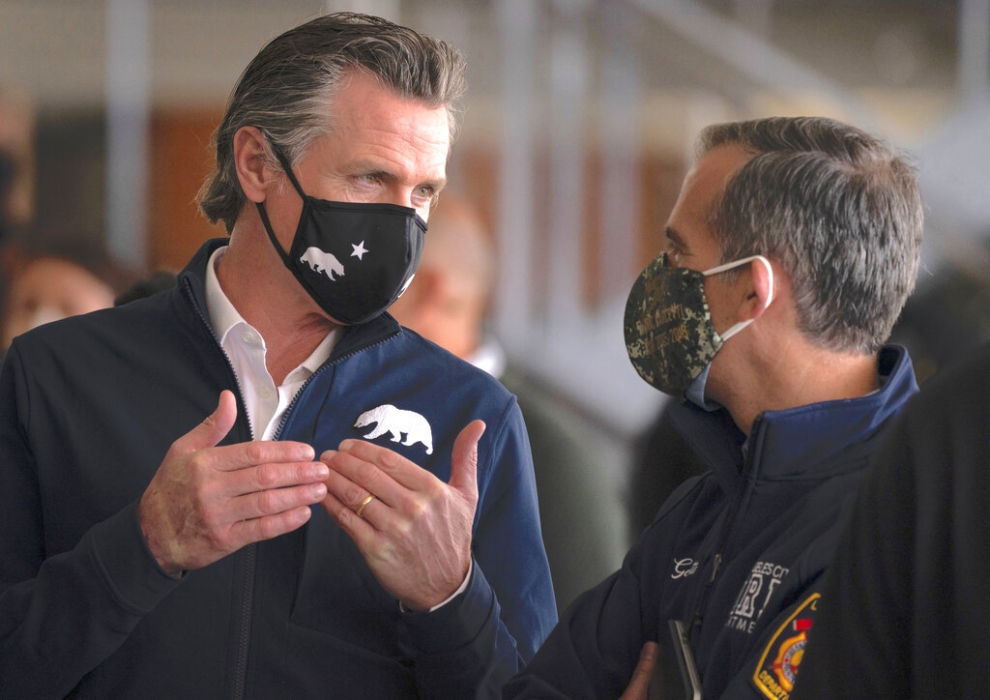 In this Feb. 16, 2021 file photo, California Gov. Gavin Newsom, left, talks to Los Angeles Mayor Eric Garcetti during a news conference at a joint state and federal COVID-19 vaccination site set up on the campus of California State University of Los Angeles in Los Angeles. In Tandon v. Newsom, the Supreme Court granted an injunction against state regulations which limited gatherings within churches to slow the spread of the COVID-19 virus.

In Tandon v. Newsom, 593 U.S. ____ (2021), the U.S. Supreme Court granted injunctive relief against a California regulation that had the effect of restricting at-home Bible studies and prayer meetings by limiting all gatherings in private homes to no more than three households at a time. In so doing, the Court chided the 9th U.S. Circuit Court of Appeals for not itself issuing an injunction while the case was being appealed.

The 5-4 per curiam opinion followed the same divisions that the Court had demonstrated in Roman Catholic Diocese of Brooklyn v. Cuomo (2020) and South Bay United Pentecostal Church v. Newsom (2021), which had involved limits on gatherings within churches. The decision both cited these precedents and utilized their reasoning.

In four findings specific to this case, the Court observed first that California was treating secular and religious activities differently, by permitting hair salons, retail stores, personal care services, movie theaters, private suites at sporting event and concerts that brought together more than three households at a time.

Second, rather than proving that the specific religious activities at issue posed greater risks, the state had proved only that they took place in private settings.

Fourth, although the regulations were not currently in force, the state retained the right to reinstate them.

The majority pointed out that this was the fifth time that it had rejected 9th Circuit findings in similar cases and that strict scrutiny remained the standard that the circuit court should be applying in this case.

Chief Justice John Roberts indicated that he would have denied the injunction. Justice Elena Kagan filed a dissent joined by Justices Stephen Breyer and Sonia Sotomayor. Also citing her dissent in South Bay United Pentecostal Church v. Newsom (2021, Kagan insisted that the California regulations were valid because they equally applied to religious and secular gatherings within homes; the references to hardware stores and other business were thus equivalent to comparing apples and watermelons. Moreover, judges relying upon medical testimony had explained that home religious gatherings were not comparable to those in secular settings because participants were likely to stay longer than in comparable businesses, houses are typically smaller than business establishments, and enforcement in home environments is more difficult.

Taken together, the Supreme Court cases related to COVID-19 suggest that, despite the medical emergency, a narrow majority continues to apply strict scrutiny to any regulations that appear to discriminate against religious and in favor of what they consider to be comparable secular arenas.

This article was published April 18, 2021. Dr. John R. Vile is a professor of political science and dean of the University Honors College at Middle Tennessee State University. His is the author of Essential Supreme Court Decisions: Summaries of Leading Cases in U.S. Constitutional Law, which is currently in its 17th edition.