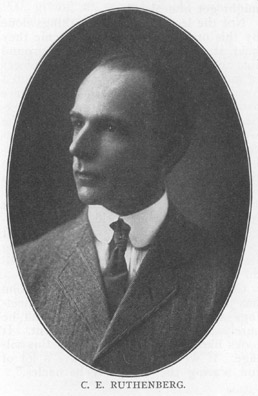 Charles Ruthenberg, shown here in a 1910 photo, was the executive secretary of the Communist Party of the United States. He was convicted for attending a Communist meeting in Michigan; however, he died before the Supreme Court could uphold his conviction. Justice Louis D. Brandeis used his planned dissent in the case as his concurrence in Whitney v. California, now considered foundational First Amendment law. (Image via Wikimedia Commons, public domain)

Although the Supreme Court dismissed Ruthenberg v. Michigan, 273 U.S. 782 (1927), on the death of Charles Ruthenberg, the national executive secretary of the Communist Party of the United States, its deliberation in this case proved influential in Whitney v. California (1927).

Justice Louis D. Brandeis used the dissent that he had been preparing in Ruthenberg to form the backbone of his famed concurrence there. Brandeis’s concurrence in Whitney is considered foundational First Amendment law.

Ruthenberg, a long-time communist agitator, spent most of his life in Ohio, where he had run on several occasions for political office. The Supreme Court had previously sustained his conviction in Ruthenberg v. United States (1918) for interfering with military conscription.

Michigan subsequently charged Ruthenberg with having attended a secret meeting of the Communist Party, which the state alleged had been “formed to teach and advocate the doctrines of criminal syndicalism.”

As the majority of the Supreme Court prepared to uphold the conviction, Brandeis authored a vigorous dissent, refining the “clear and present danger” test that his colleague Oliver Wendell Holmes Jr. had introduced in Schenck v. United States (1919).

Although Brandeis expressed clear distaste for communism, he believed the Michigan law attempted to criminalize a “mere act of assembling.”

Brandeis argued that “[i]n a democracy public discussion is a political duty.” Brandeis said that “no danger flowing from speech can be deemed clear and present, unless the incidence of evil apprehended is so imminent that it may befall before there is opportunity for full discussion. Only an emergency can justify repression.”

Criticizing the “bad tendency” standard for suppressing speech that the Court had announced in Gitlow v. New York (1925), Brandeis said, “Mere bad tendency of the utterance cannot [justify repression].” He noted that “if the only evil apprehended was illegal violence in the final struggle, there could be no basis for a claim that mere assemblage with this society, although formed to advocate the noxious doctrine, would create imminent danger of the evil. There was absent that proximate relation of cause or consequence of which alone the law commonly takes account.” Brandeis observed that Ruthenberg’s advocacy had fallen “short of incitement.”

After Ruthenberg’s death, Brandeis transposed much of this decision to his concurrence in Whitney, for which he had originally authored a short two-paragraph opinion (not surprisingly, scholars have long noted that his concurrence reads more like a dissent). Consistent with the gender of the individual involved in the latter case, in Whitney he added the memorable line that “Men feared witches and burnt women” (Collins and Skover 2005, p. 374).

Brandenburg v. Ohio (1969) later overturned criminal syndicalism laws, like those that the Court majority had been prepared to uphold prior to the plaintiff’s death in Ruthenberg and that it did uphold in Whitney.