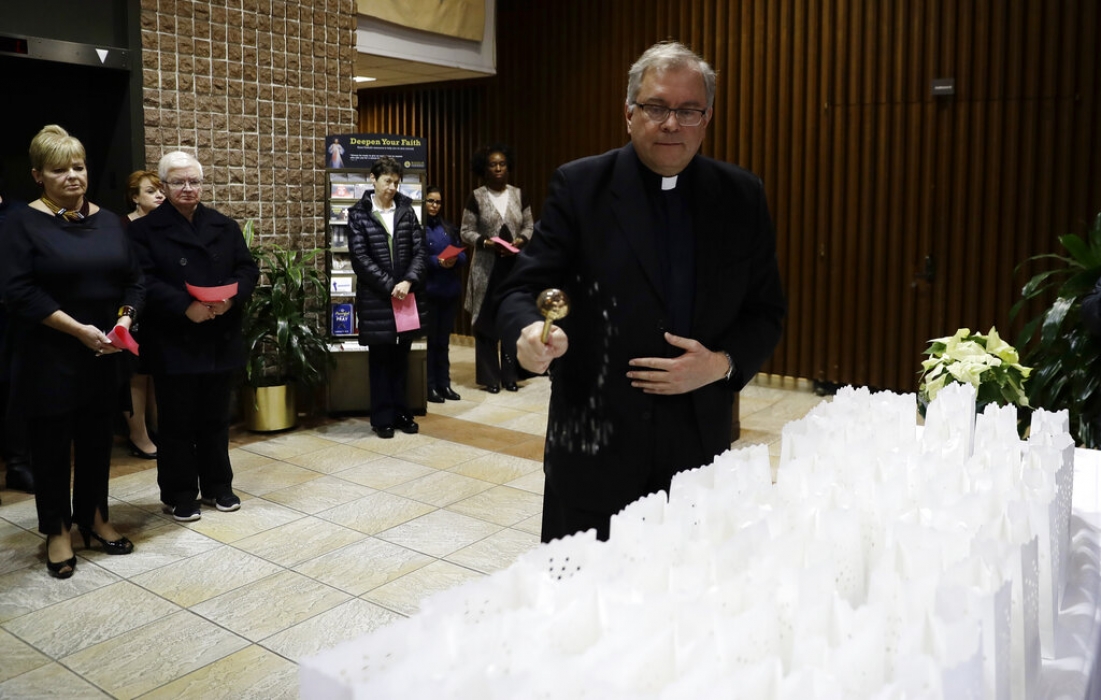 Ruling in favor of religious freedom, the Supreme Court said in Fulton v. City of Philadelphia that Catholic Social Services could not be denied a city contract for foster care placement services because it refused to certify same-sex couples as foster families. Here, a priest blesses luminaries at an anti-abortion prayer service sponsored by Catholic Social Services of the Archdiocese of Philadelphia in 2019. (FILE AP Photo/Matt Slocum)

The U.S. Supreme Court in Fulton v. City of Philadelphia, 593 U.S. ____ (2021) upheld the religious rights of Catholic Social Services, saying the agency’s religious-based refusal to certify same-sex couples as foster families could not be the city’s reason for ending the agency's long-held foster care placement contract.

Although all nine justices struck down the contract decision by Philadelphia authorities, the case sparked great interest because of the clash of issues it involved and because of a concurring opinion by Justice Samuel Alito and joined by Justices Clarence Thomas and Neil Gorsuch.

The case emerged when Philadelphia stopped referring foster care placements to Catholic Social Services (CSS) and would not renew the agency’s contract unless CSS agreed to certify same-sex couples as prospective foster families. CSS refused because of its belief that marriage was “a sacred bond between a man and a woman” although it had been willing to place gay children in foster homes and to refer gay couples to other agencies.

A federal district court and the 3rd U.S. Circuit Court of Appeals denied petitions for a preliminary injunction against the city, saying Philadelphia’s non-discrimination requirements in its foster care contract were neutral and generally applicable.   But the Supreme Court reversed and ruled that the city had violated CSS’s free exercise of religion rights guaranteed by the First Amendment.

CSS had urged the court to strike down Philadelphia’s non-discrimination requirements arguing that the court’s decision granting government more latitude in Employment Division, Department of Human Resources of Oregon v. Smith (1990) had been mistaken. In Smith, the court had ruled that general laws that impinged on religious free exercise did not require the state to establish a compelling interest and narrow tailoring to such interest. In that case, the court upheld Oregon’s denial of unemployment benefits to two individuals who had ingested peyote as part of a Native American religious ritual and were fired for violating state criminal law.

However, Chief Justice John Roberts Jr., who authored the majority opinion, chose to apply the more exacting strict scrutiny standard in the Philadelphia case because Philadelphia’s requirement in its foster care contracts to provide services without regard to sexual orientation also permitted exceptions. In granting exceptions, Philadelphia did not treat religion in a neutral manner.

The court’s Philadelphia decision was much like that in Masterpiece Cakeshop, LTd. V. Colorado Civil Rights Commission (2018). In that case, the court ruled that the proprietor of a cake shop could not be forced to make a specialty cake for a gay wedding of which he disapproved because the state civil rights commission that had ruled against him had shown special animus against his religious beliefs.

Although the Philadelphia decision featured other concurring opinions authored by Justice Amy Coney Barrett and Justice Neil Gorsuch, it was arguably most notable for the 77-page concurring opinion written by Alito and joined by two colleagues. Alito thought that the court should use the opportunity to overturn the Smith decision. Drawing from a variety of legal scholars, Alito pointed out that the original decision had been decided by a narrow 5-4 majority, that it was inconsistent with most prior precedents, that the court had struck down numerous laws impinging on free exercise on the basis of what he considered to be artificial distinctions from and evasions of the Smith case, and that Congress had expressed its own dissatisfaction with the decision by adopting both the Religious Freedom Restoration Act (1993) and the Religious Land Use and Institutionalized Persons Act (2020).

Alito’s strongest arguments, however, centered on what he considered to be the court’s failure in the Smith case to heed the “normal and ordinary” meaning of the term “free exercise” when it was adopted. Going back into colonial and early American history, Alito concluded that, far from simply requiring “equal treatment,” the free exercise of religion clause was designed to provide specific protection for those whose actions were motivated by religious beliefs. He believed that the only time governments were required to discount religiously motivated behavior was when such behavior threatened “the public peace” or “safety.” Moreover, he pointed to numerous instances in early American history, including exemptions from oaths, from conscription law, and even from some marriage laws, where states had provided special exceptions for religious believers.

Whereas Justice Barrett expressed concern in her concurring opinion about replacing the categorical rule in Smith with another rule that might prove equally unworkable, Alito believed that it would be perfectly acceptable to return to the pre-Smith standard that required governments to apply strict scrutiny to cases that affected believers and require that any such laws be narrowly tailored to meet these interests. By contrast, he believed that the court’s narrow majority decision in this case invited further litigation.

Although the majority did not overrule the Smith decision, the fact that all nine justices sided with Catholic Social Services at a time when it had also interpreted LGBTQ+ rights in an expansive fashion underlines the degree to which the current court is especially sensitive to infringements of free exercise and free speech rights, especially in the expression of viewpoints that may no longer be shared by ruling elites.

This article was published in June 2021. John R. Vile is a Professor of Political Science and Dean of the University Honors College at Middle Tennessee State University whose seventh edition of A Companion to the United States Constitution and Its Amendments will be published in the fall of 2021.