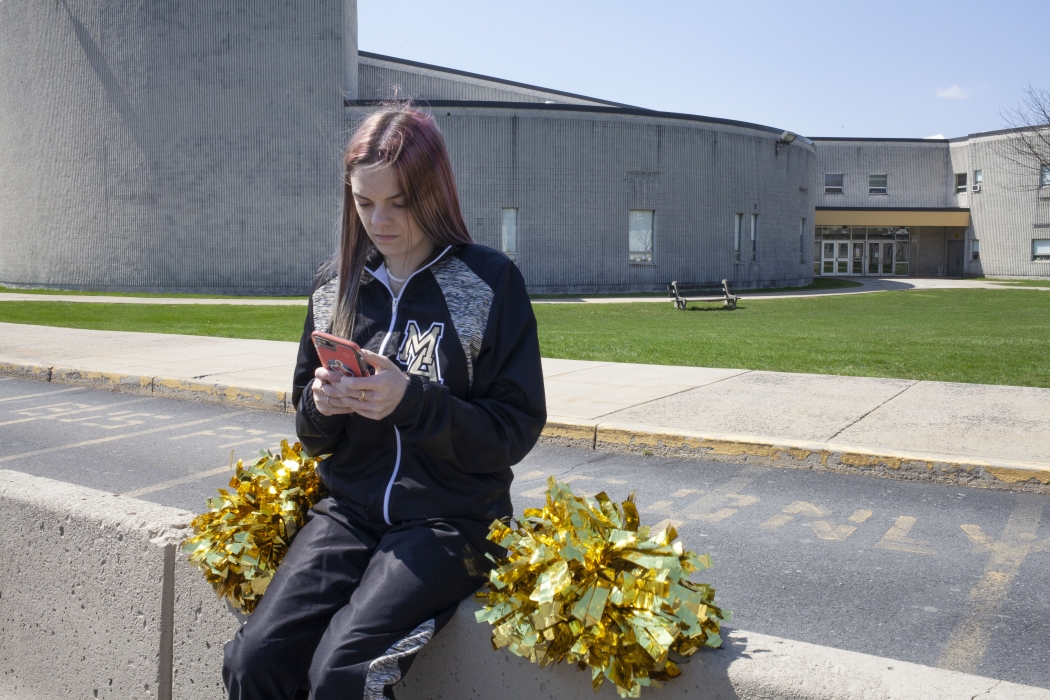 Brandi Levy, a Pennsylvania high school student, was suspended from the cheerleading squad after sending a Snapchat message that contained profanity over not making the varsity team. She won a First Amendment victory on June 23, 2021, when the Supreme Court said the school violated her First Amendment free-speech rights. (Photo by Danna Singer/Provided by the ACLU)

In Mahanoy Area School District v. B.L. (2021), the U.S. Supreme Court ruled that Pennsylvania high school officials lacked the authority to discipline a student for an off-campus, vulgar Snapchat post that she made in frustration after not making the varsity cheerleading squad. The court ruled 8-1 that the social media post did not cause a substantial disruption under Tinker v. Des Moines Independent Community School District.

The controversy began when then-freshman Brandi Levy – identified in court papers by her initials “B.L” – learned that she did not make the varsity cheerleading squad and also did not get her desired position on a softball team unaffiliated with Mahanoy Area High School. On a Saturday afternoon, Levy with a friend posted a Snapchat that read, “Fuck school fuck softball fuck cheer fuck everything.” She made the post outside Cocoa Hut, a local convenience store.

A federal district court ruled in favor of Levy, as did the U.S. Court of Appeals for the 3rd Circuit, which ruled that the Tinker substantial disruption standard does not apply to off-campus, online student speech.  Alternatively, the 3rd Circuit also ruled that – even if Tinker did apply – the post did not rise to the level of substantial disruption.

The school district appealed to the U.S. Supreme Court.  Writing for the majority, Justice Stephen Breyer reasoned that a school’s regulatory interests are lessened when a student engages in off-campus social media speech.  He identified “three features” of social media speech that dictated such an approach.

Ruling: Student's snap did not cause substantial disruption

Applying these features, Breyer concluded that the school’s interest in disciplining Brandi Levy was low compared with her First Amendment free-speech rights.   He noted that Levy’s parents should be the decider of discipline for her off-campus Snapchat, not school officials, writing that “the school’s interest in teaching good manners is not sufficient, in this case, to overcome B.L.’s interest in free expression.” He also reasoned that there was no evidence that her social media expression caused a substantial disruption under Tinker.

Justice Samuel Alito, joined by Justice Neil Gorsuch, wrote a concurring opinion that emphasized more the aspect of parental rights. “In our society, parents, not the State, have the primary authority and duty to raise, educate, and form the character of their children,” he wrote.   Alito also questioned whether school officials could punish off-campus student speech through rules on bullying and harassment, writing that “these concepts are not easy to define with the precision required for a regulation of speech.”

Only Justice Clarence Thomas dissented, which is not surprising given his concurring opinion in Morse v. Frederick (2007) that called for the overruling of Tinker. Thomas again looked to history to determine that “schools historically could discipline students in circumstances like those presented here.”