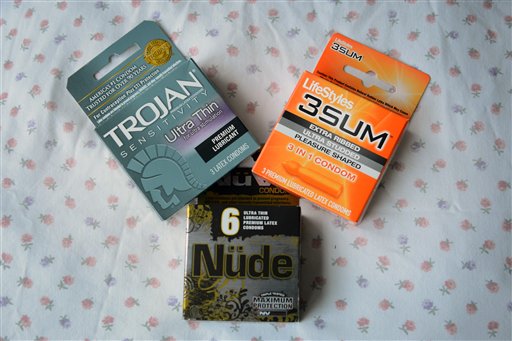 A New York law that made it illegal to advertise or display contraceptives was struck down by the Supreme Court in the 1977 case Carey v. Population Services International, along with its provisions that made it illegal to distribute contraceptives to minors, or for anyone other than a licensed pharmacist to distribute them to adults. The state had said a magazine's advertisement and an advertisement bought in a newspaper violated the law. (Photo of three popular condom brand boxes that are commonly available in drug store and grocery store aisles, via Associated Press).

New York had found that a corporation owned by Population Services International, a nonprofit that distributes birth control information and services, had violated the statute, including with advertisements in a college newspaper and in magazines.

Citing its invalidation of state bans on the sale and dissemination of contraceptives in Griswold v. Connecticut (1965) and Eisenstadt v. Baird (1972), the Court held that the New York statute’s limiting distribution to pharmacists and disallowing advertising violated the right of privacy.

The Court also dismissed the state’s prohibition on providing contraception to minors under 16.

First, an absolute ban on nonhazardous contraception failed to advance the state’s interest in the health of minors.

Second, the state’s interest in discouraging adolescent intercourse by making contraception unavailable increased the hazards of sex for these young people, essentially making pregnancy (or a sexually transmitted disease) a state-prescribed punishment for teenage fornication.

In dismissing the advertising and display regulations of the statute, the Court employed the reasoning of Virginia State Board of Pharmacy v. Virginia Citizens Consumer Council, Inc. (1976), which dealt with the regulation of commercial speech.

The statute in the Virginia case, like the one in Carey, did not prohibit false advertising or the promotion of illegal activity. The statute also did not restrict speech based on legitimate considerations of time, place, and manner, which are permissible state interests in the regulation of commercial speech.

Quoting from its holding in Virginia State Board of Pharmacy, the Court in Carey “held that a State may not ‘completely suppress the dissemination of concededly truthful information about entirely lawful activity,’ even when that information could be categorized as ‘commercial speech.’ ”

Brennan said the advertising was protected by the First Amendment

Justice William Brennan, who wrote the opinion for the court, said: "The prohibition of any advertisement or display of contraceptives that seeks to suppress completely any information about the availability and price of contraceptives cannot be justified on the ground that advertisements of contraceptive products would offend and embarrass those exposed to them, and that permitting them would legitimize sexual activity of young people. These are classically not justifications validating suppression of expression protected by the First Amendment, and here the advertisements in question merely state the availability of products that are not only entirely legal, but constitutionally protected."

This article was originally published in 2009. Francis J. Beckwith is Professor of Philosophy and Church-State Studies, and Affiliate Professor of Political Science, at Baylor University. A graduate of Fordham University (PhD., philosophy) and the Washington University School of Law, St. Louis (MJS), he has authored numerous academic articles dealing with religious liberty, religious establishment, and bioethics. Among his over one dozen books are Defending Life: A Moral and Legal Case Against Abortion Choice (Cambridge University Press, 2007) and Taking Rites Seriously: Law, Politics, and the Reasonableness of Faith (Cambridge University Press, 2015 ), winner of the American Academy of Religion’s 2016 Book Award for Excellence in the Study of Religion in the category of Constructive-Reflective Studies.