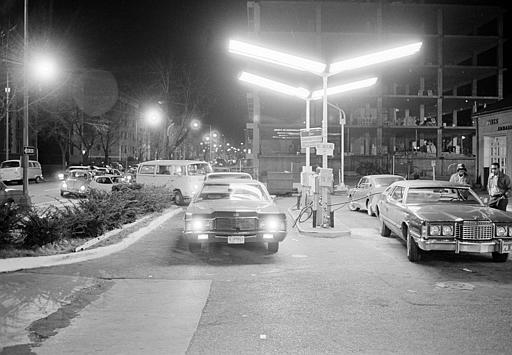 The energy crisis of 1973 prompted New York to order electric utilities in the state to stop advertising as a way to reduce energy consumption. The challenge to the order by Central Hudson Gas and Electric Corp. led to a Supreme Court case clarifying First Amendment protections of commercial speech and outlining a test for when government can regulate it. (In this Dec. 1 1973 photo, cars line up at a Washington D.C. service station to fill up with gasoline in anticipation of the closing of the stations later that night, to help ease the fuel shortage. Photo by AP Photo/Harvey Georges, reprinted with permission from The Associated Press.)

The Supreme Court decision in Central Hudson Gas and Electric Corp. v. Public Service Commission, 447 U.S. 557 (1980), established a four-part test for determining when commercial speech can be regulated without violating the Constitution.

Although the test has been subsequently modified slightly and is often criticized, it remains the standard applied in virtually all commercial speech cases.

The history of First Amendment protection for commercial speech

In 1976, in Virginia State Board of Pharmacy v. Virginia Citizens Consumer Council, Inc., it noted the value of commercial communications to a free enterprise system, but nevertheless still considered commercial expression to be low-value speech.

With Central Hudson Gas and Electric Corp. v. Public Service Commission, Justice Lewis F. Powell Jr. commanded the support of five of eight justices in the majority in overturning lower court decisions and announcing a new four-part test for determining when commercial speech is protected by the Constitution.

In an effort to conserve energy and discourage consumption during the 1973 energy crisis, the Public Service Commission of New York had ordered all electric utilities in the state to cease advertising. Central Hudson Gas and Electric Corp. challenged the order in court as a restraint on free speech.

Lower courts ruled that the government’s interest in discouraging consumption outweighed the value of the speech. The Supreme Court reversed, declaring the regulation too broad.

To settle a decade-long controversy regarding the evidentiary requirements in commercial speech cases, the Court held in Rubin v. Coors Brewing Co. (1995) that the regulating agency “must demonstrate that the harms [from speech] . . . are real and that its restriction will in fact alleviate them to a material degree.”

The Court made a major modification in the Central Hudson test by altering the level of proof required of the government to meet part four of the test. The original requirement entailed that the government prove that the means of regulation be the “least restrictive means” available, but from more recent cases evolved the demand that the government “demonstrate narrow tailoring of the challenged regulation to the asserted interest — ‘a fit that is not necessarily perfect, but reasonable; that represents not necessarily the single best disposition but one whose scope is in proportion to the interest served’ ” (Greater New Orleans Broadcasting Association v. United States [1999], citing Board of Trustees of State University of New York v. Fox [1989]).

Critics contend that the reasonableness standard is inherently subjective because what is reasonable varies from case to case. Nevertheless, since reasonableness was first proposed in In re R.M.J. (1982), the Supreme Court has more often used the standard to overturn than to uphold governmental restrictions on commercial speech.