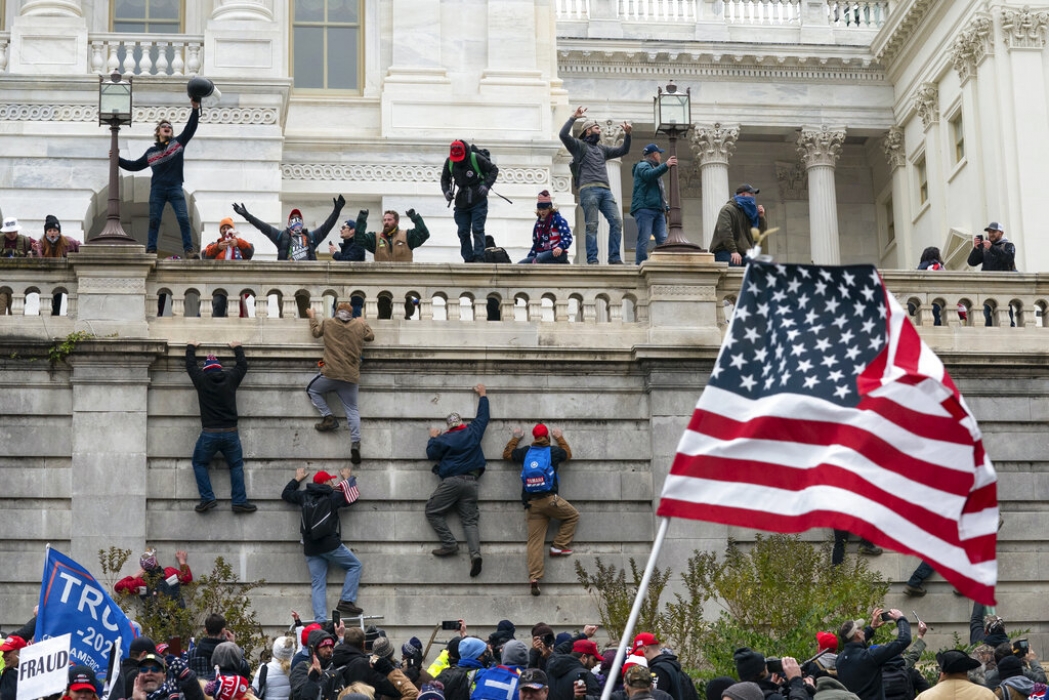 The U.S. presidential election of 2020 pitted incumbent Republican Donald J. Trump and Mike Pence against former vice president and Democrat Joe Biden and Kamala Harris. It took place during the COVID-19 epidemic, which led many states to expand early and mail-in voting, with some states specifying that such votes would not be counted until after those cast on election day. A record number of such ballots were cast.

In part because Biden had urged his supporters to vote early while Trump had downplayed the seriousness of the coronavirus and encouraged his supporters to vote on election day, Trump was leading in a number of key states  – Pennsylvania, Michigan, Wisconsin, Georgia and Arizona – during the early vote count.  But Biden eventually won in a 306 to 232 margin of victory in the Electoral College, which was similar to the victory that Trump had over Hillary Clinton in the previous election.

Trump, his lawyers, and some of his supporters on Fox News and other right-wing media, refused to concede that Biden won. They pointed to what they considered to be the suspiciousness of the shifts in voting counts on election night, questioned both the accuracy of voting machines and the integrity and impartiality of local officials, and launched a series of legal challenges to the results.

Although they ultimately lost all of them, Trump continued to lobby state officials to seek further votes on his behalf and to charge that the election had been stolen. He also urged his supporters to “Stop the Steal.”

The Constitution specifies in the 12th Amendment that the votes of the Electoral College, which are cast in each state, shall be certified in that state and sent to Congress. There, in a joint session over which the sitting vice president (as president of the Senate) presides, the amendment tasks him with counting the ballots, and, in cases of a majority vote, designating the winners. In 2021, the date for this meeting was set for Jan. 6.

As the time for the congressional session approached, Trump continued to question the outcome in key states, and urged Vice President Mike Pence to declare him to be the winner when he presided over Congress — something that Pence and most scholars concluded that he had no independent authority to do. On Jan. 6, 2021, Trump addressed a rally in the Ellipse in the National Mall just south of the White House in which he urged his followers “to fight like hell,” and warned that “if you don’t fight like hell, you’re not going to have a country anymore.”

Many supporters then moved to the U.S. Capitol Building. Members of the Proud Boys and other right-wing groups who supported Trump had apparently planned for many weeks to occupy the building and stop the vote count if it appeared that it would go against Trump. Thousands of them gathered there as members of Congress began to convene.

Anticipating trouble, but underestimating the seriousness of the situation, Capitol police had set up barricades to prevent entry into the Capitol Building, but members of the crowd breached these barricades, broke windows, and forcibly entered the building in a lengthy confrontation with police that injured many and caused significant property damage. Several people died, though only one directly as a result of the assault on the Capitol — Capitol Police shot and killed Ashli Babbitt as she tried to break into the House chamber.

Members of Congress sheltered in place as rioters roamed the halls, and police escorted Pence and his family, whom demonstrators had threatened to hang, from the building. Calm was not restored until the evening, during which Congress reconvened, the votes were counted. Vice President Pence declared Biden and Harris to be the winners. Trump continued to claim that the election had been stolen, and he did not attend Biden’s inauguration.

First Amendment did not protect rioters

The First Amendment clearly specifies not only the right to freedom of speech and press but also the right of peaceable assembly, which is often, in turn, associated with a right of association.  The right to exercise such freedoms is especially important at the seat of government and would extend to any participants in the rally on the Ellipse or outside the Capitol Building who did not directly threaten officials with violence (so-called true threats), act violently, or break any laws.

There is, however, a line between peaceful protests and violent protests, especially those that violate the law. As First Amendment expert Ken Paulson has noted, “When the barricades fell, so did First Amendment protection.”

This has not stopped members of the Proud Boys and other groups to continue, almost a year later, contesting charges against them on First Amendment and other grounds.

On Dec. 28, 2021, Judge Timothy J. Kelly of the United States District Court for the District of Columbia rejected these and other claims. Citing cases including those in which the Supreme Court has upheld the right to burn U.S. flags in protest, he distinguished such legal “expressive conduct” from the defendants’ actions in attempting “corruptly” to obstruct, influence, and impede an official proceeding, in trespassing, and in violently and illegally entering the Capitol Building.

Noting that the Proud Boys were not being prosecuted for what they thought or said but for what they were reputed to have done, Judge Kelly cited the Court’s decision upholding the law forbidding the burning of draft cards in United States v. O”Brien (1968) to indicate that in cases where speech and nonspeech elements are combined, “a sufficiently important governmental interest in regulating the nonspeech element can justify incidental limitations on First Amendment freedoms.” Kelly further rejected the argument that the laws at issue were overly vague, or overbroad, as applied to violent protestors in this case.

As of January 2022, judges had convicted and sentenced many trespassers and violent protestors although other prosecutions continued.

A U.S. House Select Committee has subpoenaed former President Trump, his top aides, and even some members of Congress for phone records and other documents to understand their role in the events of January 6 and ascertain what actions might be taken to forestall such violence in the future.

Trump has asserted executive privilege over such documents, but President Biden has, for the most part, failed to agree to this claim. A federal judge rejected his claims in November 2021. Trump appealed and the U.S. Court of Appeals for the District of Columbia Circuit upheld the ruling, saying that Biden “and the Legislative Branch have shown a national interest in and pressing need for the prompt disclosure of these documents.” Trump then filed with the Supreme Court, which in January 2022 also rejected his request to block White House documents being sent to the committee.

Although courts have not hesitated to prosecute those who have engaged in violent conduct, in Brandenburg v. Ohio, the Supreme Court established that individuals would not be held responsible for inciting such conduct unless their words were likely to lead to “imminent lawless action.” Such a bar would make it quite difficult to convict former President Trump, who addressed a prior rally rather than the one at the Capitol — and whose impeachment on similar charges did not result in a Senate conviction – of such incitement.

Republican Congresswoman Liz Cheney has suggested, however, that Trump may have breached the duties of his office, and hence his specific duty of care, by seeking corruptly to impede and obstruct the congressional vote count by not intervening expeditiously to stop the rioting earlier. Such a claim may well depend, to quote Senator Howard Baker’s comments during the Watergate hearings, on “What did the president know, and when did he know it?”

In the meantime, in related First Amendment issues, a number of voting machine companies have launched civil defamation suits seeking monetary damages against Trump’s attorneys and supporters in the news media alleging that they knowingly spread misinformation about the reliability of the products that they sold.

In 2022, constituents of Rep. Madison Cawthorn, R-N.C., challenged his right to run for reelection, contending his involvement with people who stormed the Capitol on Jan. 6, 2021, amounted to "insurrection or rebellion" and disqualified him under Section 3 of the 14th Amendment. Cawthorn argued that the First Amendment protected his right to run for office and also said he was covered under the Amnesty Act of 1872, which was passed as part of Reconstruction following the Civil War. The U.S. 4th Circuit Court of Appeals ruled that the amnesty act did not apply to Cawthorn but the court did not address the First Amendment issue. Cawthorn eventually was on the ballot again, but lost in the Republican primary.

John R. Vile is professor of political science and dean of the Honors College at Middle Tennessee State University. This article was published Jan. 9, 2021, and updated in May 2022.