By Thurman Hart
Other articles in Groups and Organizations 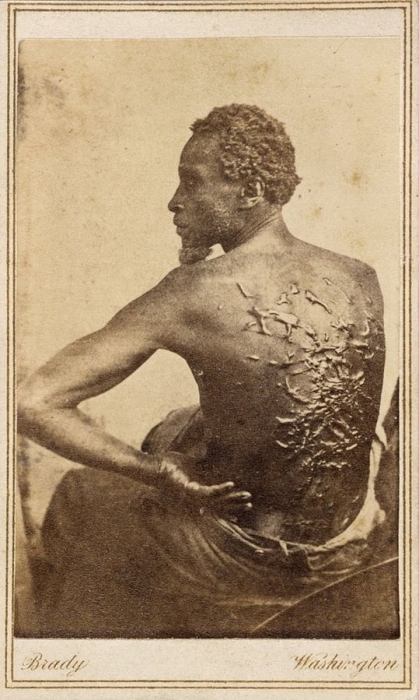 Abolitionists widely distributed this medical examination photo of a slave at a Baton Rouge union camp to expose the brutality of slavery. Before the war, slave-owning states passed laws banning abolitionist expression, and Congress adopted a gag rule that prevented any mention of abolition or banning slavery. (Image via Wikimedia Commons, public domain)

The movement to abolish slavery — which is usually tied to William Lloyd Garrison’s founding of the abolitionist newspaper the Liberator in 1831 — spread swiftly and ferociously. It prompted defenders of slavery to use legal and some illegal means to stem the tide of anti-slavery sentiment, including limiting the ability to speak against the practice of slavery.

Events in the 1820s created fear of abolition in the South

Several events created an atmosphere of fear in the South so that measures to thwart abolitionism could be passed under the guise of maintaining peace and order.

The 1820 Missouri Compromise was crafted to accommodate the demands of pro-slavery as well as pro-abolition movements. In fact, it satisfied only the moderates on both sides. Extreme pro-slavery elements objected to it because it provided a precedent by which Congress had power to regulate slavery. Abolitionists opposed it because it allowed slavery to continue to spread in some of the areas.

The 1822 revelation of Denmark Vesey’s planned slave rebellion in South Carolina shocked southerners. Vesey had organized to lead an army of slaves through Charleston, killing white people in their path. Only the betrayal of Vesey by some of his army prevented his plan from being put into practice. The realization that blacks in several states actually outnumbered whites made residents of slave states all too aware of their tenuous position of power.

The tariff of 1828, designed to aid Northern manufacturers by increasing the cost of imported goods, also raised fears of economic pain. Having barely recovered from the Panic of 1819, economic interests in the South cast about for a way to fight back. John C. Calhoun provided that means with his impassioned advancement of “nullification” of federal laws. Eventually the tariff was repealed, but the legal justification of independent state action had been broached.

Abolitionists began to push more forcefully, urging “any means necessary” to defeat slavery. Within a few years, they would organize the Underground Railroad to help slaves escape. In response to mass mailings of the Liberator, North Carolina passed laws to forbid teaching blacks to read or to provide them with reading material. Nat Turner, an enslaved preacher, led an uprising in 1831 in Virginia, which responded by banning nighttime religious services for slaves.

Abolitionist preaching led to heightened tensions in the North as well. In 1834–1835, such tensions resulted in riots in New York City and in Philadelphia. In the wake of these events, Alabama, Georgia, North Carolina, South Carolina, and Virginia published open letters and sent official communications to northern states urging them to control the disruptive activities of abolitionists.

In response to the overwhelming submission of petitions to the U.S. House of Representatives in support of abolitionist legislation, pro-slavery and moderate anti-slavery forces banded together to pass a gag rule in the House.

The rule, originally passed in 1836 to produce a “cooling off” period, was renewed and strengthened to ban virtually any mention of abolition or the limiting of slavery or the slave trade.

As with earlier attempts to ease tensions, the irreconcilable goals of the two sides doomed this effort to failure.

Former president John Quincy Adams argued against the rule, offering resolutions to lift it at every chance. The House eventually censured him for his actions.

Anti-slavery activists increase mailings and form societies in the South

Rather than cooling passions, the gag rule merely forced activists to seek other channels of activity.

These included increased mailings of newspapers and lecture tours designed to incite the public against the evils of slavery as well as to encourage slaves to resist their masters. Around this time, anti-abolitionists held meetings and formed societies throughout the southern states.

The implementation of the gag rule also helped fuel the abolitionist movement in northern states, resulting in the election of enough new members of Congress to overturn it in 1844.

Calhoun attempted to introduce a similar gag rule in the Senate. His measure was blocked, however, in favor of a rule to force a vote on whether to consider receiving a petition rather than voting to accept the petition. This provided pro-slavery senators with a guaranteed method of preventing discussion of abolition within the Senate.

In 1837, Missouri banned abolitionist expression of any kind. Within a couple of years, every Southern state had adopted laws that limited the freedom of speech with regard to abolitionist sentiment.

Southerners were especially wary of strangers, and local meetings of anti-abolition societies often demanded that state legislatures pass even stricter measures, calling for special taxes on abolitionists, and in some cases their immediate expulsion or imprisonment.

In parts of Louisiana, strangers could be arrested for conversing with blacks. Agitators and abolitionists sometimes had bounties on their heads.

Lincoln initially viewed the Civil War as a means of preserving the Union, but eventually he used it to eliminate slavery as well, through emancipation.

The U.S. government formalized the abolition of slavery with the Thirteenth Amendment, ratified in 1865. In attempting to guarantee the rights of former slaves, the Fourteenth Amendment, ratified in 1868, included a clause providing for “due process of law.” In time, this provision would become the vehicle through which the Supreme Court would apply provisions of the Bill of Rights, including the First Amendment, to the states after decades of only applying it to the national government.