By David L. Hudson, Jr.
Other articles in Issues Related to Speech, Press, Assembly, or Petition 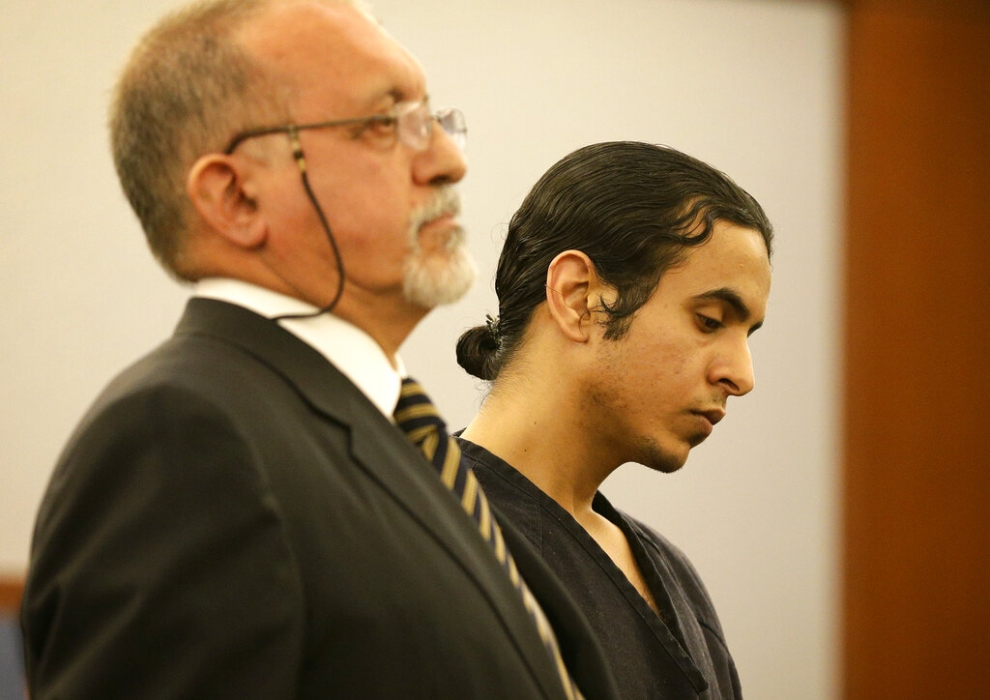 In a key case about the free speech rights of attorneys, the U.S. Supreme Court in 1991 ruled in favor of attorney Dominic Gentile who had been disciplined by the State Bar of Nevada for violating a rule of professional conduct when making statements to the press.  The court in a narrow decision found Nevada's law too vague. Lawyers don't forfeit all rights of free speech as members of a profession, but courts have ruled they can be limited in certain ways, most notably in what they say inside a courtroom. In this photo, Gentile appears with a client in 2015 in Nevada.

Lawyers do not forfeit all of their free-speech rights as members of a profession, but their speech rights are limited in many ways.

Rules of professional conduct adopted by the supreme courts in each state, for example, prohibit lawyers from making false statements about judges, writing legal papers that are deemed “frivolous,” engaging in speech that disrupts the tribunal or engaging in direct, face-to-face solicitation of prospective clients, with a few exceptions.

Lawyers may be limited in making certain statements to the press

Rules of professional conduct generally prohibit a lawyer from making statements to the press that have a substantial likelihood of materially prejudicing a pending case. For this reason, judges sometimes issue gag orders on trial participants to prohibit lawyers from trying their cases in the media rather than in the courthouse.

The U.S. Supreme Court addressed this issue most directly in Gentile v. State Bar of Nevada, 501 U.S. 1030 (1991). Criminal defense attorney Dominic Gentile was defending a man who was accused of stealing money and drugs from a safety deposit vault rented by undercover police officers. Gentile’s client was the owner of the company that offered the safety vaults. Gentile gave a press conference in which he proclaimed his client’s innocence and said that the more likely culprits were the police officers who had access to the vault.

The State Bar of Nevada sought to discipline Gentile for violating a rule of professional conduct that prohibited lawyers from making statements that have a substantial likelihood of materially prejudicing a pending case. However, the rule also contained a so-called “safe harbor” provision that allowed attorneys to counter negative publicity that their clients faced.

Gentile challenged the Nevada rule on First Amendment grounds. The court ruled that the “substantial likelihood” standard was valid but acknowledged that the safe harbor provision was vague. Thus, the court ultimately ruled in Gentile’s favor.

“An attorney’s duties do not begin inside the courtroom door,” Justice Anthony Kennedy wrote in his majority opinion. “He or she cannot ignore the practical implications of a legal proceeding for the client.” He also emphasized that Gentile made his statements months before the actual trial took place. Kennedy also noted that Gentile’s speech did not prejudice the actual trial that eventually took place – and which led to an acquittal of Gentile’s client.

Attorney speech rights become even more limited when their speech takes place during the pendency of a trial.

Lawyers can advertise but face some limits

Lawyers advertise to increase their business and let the public know of the legal services that they offer. However, rules of professional conduct place some limitations upon attorney advertising. The U.S. Supreme Court first recognized that truthful lawyer advertising is entitled to some First Amendment protection in Bates v. State Bar of Arizona, 433 U.S. 350 (1977). In that decision, the court recognized that two Arizona lawyers had a First Amendment right to truthfully advertise their prices for low-cost legal services in a newspaper. The court emphasized that attorney advertising, a form of commercial speech, offered knowledge to persons who might really need legal assistance.

After Ohralik, the court protected attorney advertisers in a variety of cases, including:

However, this clear trend of protecting attorney advertisers ended in Florida Bar v. Went-For-It, Inc. (1995). In that decision, the U.S. Supreme Court narrowly upheld (5-4) a Florida Bar rule that prohibited lawyers from sending solicitation letters to accident victims until 30 days after their accident. The majority reasoned that the 30-day ban on such letters directly furthered the state’s substantial interests in protecting accident victims and preserving the reputation of the bar.

Rules of professional conduct prohibit in Rule 8.2 lawyer statements about judges that are false or made in reckless disregard for the truth. This standard seems to mirror the language from the venerable free-speech precedent of New York Times Co. v. Sullivan, 376 U.S. 254 (1964). In that landmark libel decision, the U.S. Supreme Court protected even false speech about public officials unless the speaker uttered the falsehood with actual malice – that is, knowing the statement was false or in reckless disregard as to the truth or falsity of the statement.

However, many states have not applied Sullivan with full force in disciplinary cases involving attorneys who criticize or denigrate judges. Professor Margaret Tarkington explains that “[o]ne of the most jarring aspects of the cases on attorney speech impugning judicial integrity is the near universal rejection by state courts of the Sullivan standard. She explains that attorneys are often punished for speech that would not rise to the level of defamation liability under the Sullivan standard. This has led to attorneys being punished for speech critical of the judiciary and speech accusing the court of being biased, result-oriented or corrupt.

The lesser protection for attorney speech may conflict with the U.S. Supreme Court’s decision in National Institute of Family and Life v. Beccera (2018). In that decision, the court rejected the idea of the “professional speech doctrine” and wrote that “speech is not unprotected simply because it has been uttered by professionals.” In other words, the question is if there is no general lessened protection for professional speech, does it make sense to continue treating lawyer speech differently? After all, the Supreme Court warned years ago in Bridges v. California, 314 U.S. 252 (1941) – a case involving newspaper criticism of the judiciary – that “[t]he assumption that respect for the judiciary can be won by shielding judges from published criticism wrongly appraises the character of American public opinion. For it is a prized American privilege to speak one's mind, although not always with perfect good taste, on all public institutions.”