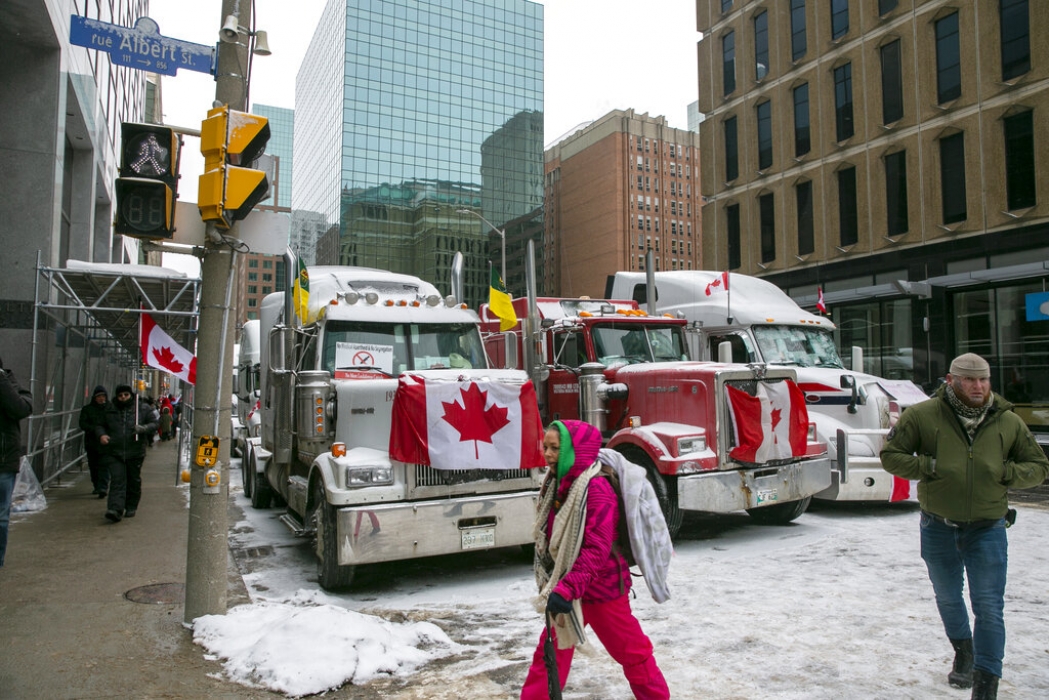 Drivers have parked their trucks blocking lanes of traffic to protest against COVID-19 pandemic restrictions in Ottawa, Ontario, on Saturday, Feb. 12, 2022. A judge has ordered protesters at the Ambassador Bridge over the U.S.-Canadian border to end the 5-day-old blockade that has disrupted the flow of goods between the two countries and forced the auto industry on both sides to roll back production. (AP Photo/Ted Shaffrey)

Article I, Section 8 of the U.S. Constitution vests Congress with the power to regulate interstate commerce and commerce with foreign nations. This provision was one of the bases for the Civil Rights Act of 1964, which prohibited racial discrimination in places of public accommodation. More recently, it has been used to require truckers who cross the U.S./Canadian border to get vaccinated.

In early 2022, truckers opposed this requirement and organized caravans in Canada in protest.  One stayed for days in the Canadian capital of Ottawa, where truckers have surrounded the parliament building, stopped traffic, and honked horns throughout the day and night, making life particularly miserable for local residents, many of whom claimed to be unable to sleep.

In February, truckers, encouraged by favorable commentary from Fox News and other right-wing U.S. media and sometimes waving American flags, stopped traffic on three major bridges connecting the U.S. and Canada. This blockade further aggravated supply chain problems that had been exacerbated by COVID-19, and led to a Canadian court injunction and the threat of police action. In the meantime, major car companies slowed production and closed plants because of a shortage of parts. The Biden Administration and the Michigan governor urged Prime Minister Justin Trudeau to bring the blockade to an end, even as some truckers were contemplating protests or similar actions, including in the United States.

While the protest and blockade was in Canada, if such an action took place in the United States, First Amendment freedoms of speech and assembly, which give individuals the right to engage in peaceful protests and to boycott or picket individual businesses, could come into play. Because they are more frequent and have been more litigated, cases involving boycotts and pickets provide some of the judicial precedents for ascertaining how governments might deal with blockades.

The Montgomery Bus Boycott, directed specifically to policies of racial segregation on these conveyances, played a major role in U.S. civil rights protests. The government does not require customers to frequent any private businesses. Courts have been less sympathetic to so-called secondary boycotts, which, in targeting one business, have detrimental effects on other businesses.

Governments have the right to end boycotts with major secondary effects as long as they apply neutral rules. Such regulations would be similar to neutral and reasonable “time, place, and manner” restrictions, including noise regulations related to honking horns and — as pertinent here — laws designed to keep streets open for commerce and emergency vehicles.

The U.S. government may not, however, have the power to end a boycott in the United States that was simply protesting a requirement for truckers to get a COVID-19 vaccination while perpetuating a boycott against truckers without COVID-19 vaccines. The same would be true for a boycott in aid of one political viewpoint or party over another. Similarly, truckers, like other Americans, have the right both through speech and press to express their opposition to policies involving COVID-19 and other matters, and to petition their elected representatives to change current policies.