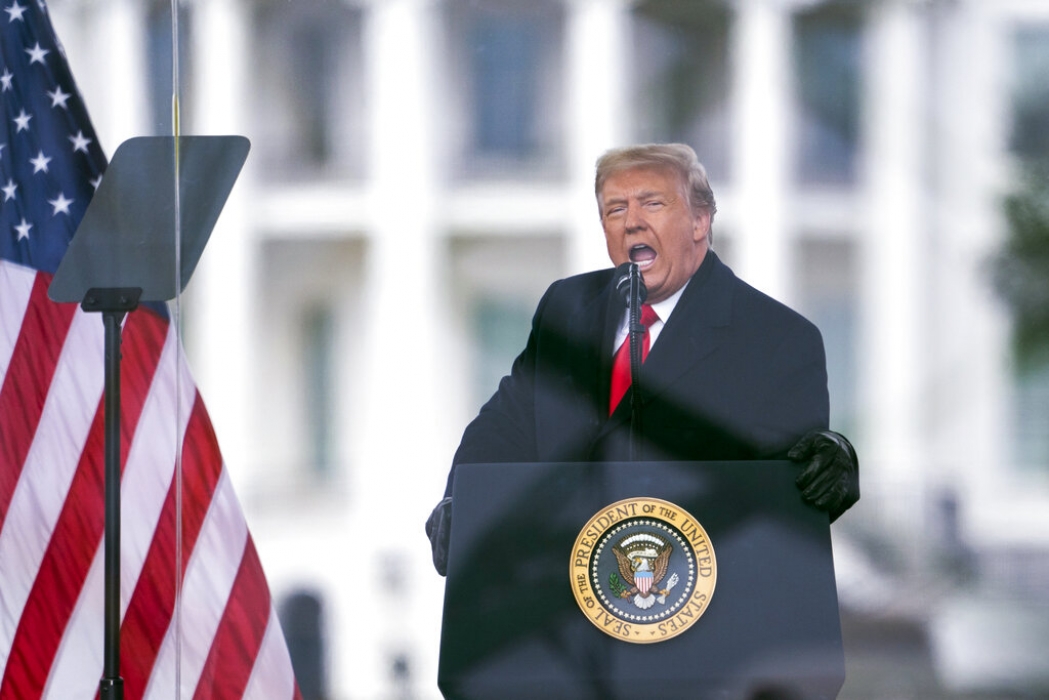 President Donald Trump speaks during a rally protesting the electoral college certification of Joe Biden as President in Washington on Jan. 6, 2021. A federal judge who rejected Trump's motion to dismiss a civil case against him for damages suffered during the riot said that Trump's speech was not tied to any official duty and he was speaking more as a candidate than as a president. (AP Photo/Evan Vucci, File)

Although the U.S. Senate voted to acquit President Donald Trump on impeachment charges of inciting violence at the U.S. Capitol on Jan. 6, 2021, U.S. District Judge Amit P. Mehta opened a path in 2022 to hold him liable for civil damages that resulted from the melee.

On Feb. 18, 2022, the federal judge of the Washington, D.C., district denied Trump’s claim that presidential absolute immunity for his speech shields him from the lawsuit and rejected his motion to dismiss.

The case has implications for First Amendment law, including the degree to which the standard for “incitement to illegal action” remains the law of the land, and the degree, if any, to which it might be modified when applied to the speech of a U.S. president and other public officials.

In Thompson v. Trump, 11 members of the U.S. House of Representatives and two Capitol Police officers seek damages for physical injuries and emotional distress from the former president Donald Trump, his son, Donald J. Trump Jr., his lawyer Rudolph W. Giuliani, Republican U.S. Rep. Mo Brooks, and a number of organizations including the Proud Boys, Oath Keepers, and Warboys, and the Proud Boys' leader, Enrique Tarrio.  The judge granted the requests to dismiss Giuliani and Trump Jr., as defendants in the case.

The plaintiffs brought their case under the Ku Klux Klan Act of 1871, embodied in Section 1985 (1) of the U.S. Code, which prohibits conspiracies that seek “by force, intimidation, or threat” to prevent public officials from discharging their official duties.  The police officers and congressional members accuse Trump and others of inciting violence in an attempt to disrupt the certification of Electoral College votes for President Joe Biden and Vice President Kamala Harris.

One plaintiff also brought a case against Trump under the companion provision of the U.S. Code, Section 1986, which provides liability for individuals in power who neglect or refuse to take steps to prevent such conspiracies.

Mehta’s 112-page opinion meticulously reviews claims by Trump and his allies that the election had been stolen from him; his attempts to influence the reporting of vote counts by state and local officials;  “Stop the Steal” rallies on Nov, 14, and Dec. 12, 2020, that resulted in violence; and planning for the Jan. 6 rally. Mehta gave particular attention to comments by Trump and his supporters at the rally.  Brooks had said that it was time to “start taking down names and kicking ass!” Giuliani had called for “trial by combat.” And Trump Jr. had announced “we’re coming for you, and we’re gonna have a good time doing it.”

Mehta’s devoted far more attention, however, to Trump’s speech, which lasted for 75 minutes and directly preceded the Capitol riot. Trump called for his audience to head to the Capitol (a march for which demonstrators did not have a permit) after saying that “we fight, we fight like hell, and if you don’t fight like hell, you’re not going to have a country anymore.” Mehta also pointed to evidence suggesting that the president, although aware of the violence that subsequently occurred, did little to stop it. Trump tweeted at day’s end that the election had been stolen and encouraged participants to “remember this day forever!”

Mehta addressed issues of standing, of presidential immunity, of whether the issue was a non-justiciable political question, and whether claims against Trump were precluded by the failure of the U.S. Senate to convict him of impeachment charges.

In examining the issue of standing, the judge decided that the plaintiffs had pointed to concrete injuries, both physical and psychological, that could be “fairly traceable” to Trump’s actions as a co-conspirator and that were redressable through monetary damages.

Noting that Nixon v. Fitzgerald (1982) had extended immunity to presidents for all actions that fell within “the ‘outer perimeter’” of their official duties, Mehta described such immunity as “unquestionably capacious, though not categorical.”

The judge addressed Trump’s claims that his speech on Jan. 6 fell under his duty to “take care that the laws be faithfully executed” (known as the Take Care Clause), and were protected because they involved “matters of public concern.” As to the "take care clause," Mehta said that the Constitution did not vest Trump with any role “with respect to the Certification of the Electoral College vote, at least in the manner in which he conceives it.” Nor, in this instance, did he believe that Trump had any authority over the vice president, whom Trump had publicly condemned, and who, in counting electoral votes, was acting as president of the Senate.

Judge: Trump’s speech not tied to ‘any official duty’

Admitting that speech on matters of public concern were at the “dead center” of presidential responsibilities, Mehta acknowledged that the president’s views of the electoral outcome certainly qualified. In this case, however, the circumstances were muddied by the fact that the president appeared to be speaking more as a defeated candidate than as a president, the judge said. Moreover, a president has no duty “to secure or perpetuate incumbency.”

The president had invited people to come to Washington in protest. His campaign organization had helped organize the event and spent $3.5 million to support it. And Trump had specifically called for the march on the Capitol even though there was no permit authorizing it. Trump’s provocative speech was thus tied to “an electoral purpose” rather than “in furtherance of any official duty,” the judge said.

Thus acknowledging possible civil liability for damages under Section 1985 with respect to what Trump said and did, the judge rejected claims under Section 1986 of the U.S. Code that he was also liable for not taking actions to stop the melee, lest future presidents be subject to a variety of suits for other actions they had failed to take.

Mehta acknowledged that the issues involved had “political implications,”  but he did not believe that the case involved a non-justiciable political question, in part because Trump’s actions were not undertaken in his official capacity. Similarly, he did not believe that Trump’s acquittal on impeachment charges precluded action involving civil liability. Nor did he think that the suits were barred by the principles of res judicata or collateral estoppel, legal doctrines that bar relitigation of claims

Mehta also ruled that the claims legitimately fell under Section 1985. He found that Trump was an “officer” who occupied a position of “trust” within the statutory reach of this law. He further found that the law applied to individuals seeking to prevent President Biden and Vice President Harris from assuming their rightful office and that members of Congress who were suing had been assembling to discharge their constitutional duty when the riot took place. Moreover, the judge rejected the idea that the plaintiffs would have to establish “actual malice” to prove conspiracy, noting that this standard, which had been established in New York Times v. Sullivan, (1964), had to do with defamation against public figures and not “defamatory conduct.”

The judge noted that evidence of such conspiracy was “multifaceted.” He observed:

The judge did not believe that speech by others being sued had risen to the same level. Although Giuliani had called for “trial by combat,” he did not accompany his words with “a direction to do anything.” Similarly, Trump Jr. was not alleged to have participated in rally planning, to have known about the planned march to the Capitol, or to have expressed support for the rioters.  By contrast, the other groups and the Proud Boys leader Tarrio — like Trump — were deeply implicated in the conspiracy.

Judge: Even presidents cannot avoid liability for some speech

Mehta noted that the First Amendment issues in this case constituted “a substantial constitutional question,” which were magnified by the president’s unique position, which would be severely weakened if he could be hauled into court for “routine speech.”  This was especially true with respect to speech about “matters of public concern,” which although “decidedly capacious . . . is not unbounded.”

Two aspects of this case set it apart.

First, the speech appeared to qualify as part of a broader conspiracy in violation of federal law. The judge noted that even in NAACP v. Claiborne Hardware Co. (1982) which involved African Americans boycotting white merchants, the court had applied the standard of “incitement of imminent lawless action” established by the Supreme Court in Brandenburg v. Ohio  (1969).  The court had upheld this standard in Hess v. Indiana (1973), overturning a disorderly conduct conviction against a defendant whose words were highly offensive but were not directly calling upon any individuals to commit imminent lawless actions.

In examining the incitement standard, courts have to examine both “the words spoken and the context in which they are spoken,” Mehta said. Meticulously examining Trump’s speech, the judge noted that Trump had, at one point, referred to “peaceful and patriotic protest.” However, the judge found that such “passing references,” could not “inoculate” Trump against “the conclusion that his exhortation, made nearly an hour later, to ‘fight like hell’ immediately before sending rally-goers to the Capitol, within the context of the larger Speech and circumstances, was not protected expression.”

In contrast to the speeches by Giuliani and Trump’s son, Trump’s speech qualified as “an implicit call for imminent violence or lawlessness” knowing that the Proud Boys and Oath Keepers were in the crowd.

Although judges and scholars often cite John Stuart Mill’s advocacy for broad protections of free speech, the judge observed that Mill had recognized that otherwise protected expressions of opinion can sometimes lose immunity when they constitute “a positive instigation to some mischievous act.” As an example, Mill distinguished between general speeches criticizing corn-dealers and a speech delivered to a mob in front of a corn-dealer’s house.

“President Trump’s January 6 Rally Speech was akin to telling an excited mob that corn-dealers starve the poor in front of the corn-dealer’s home. He invited his supporters to Washington, D.C., after telling them for months that corrupt and spineless politicians were to blame for stealing an election from them; retold that narrative when thousands of them assembled on the Ellipse; and directed them to march on the Capitol building—the metaphorical corn-dealer’s house—where those very politicians were at work to certify an election that he had lost,” the judge wrote.

Thompson v. Trump is one of a number of legal actions being investigated with respect to Trump. Others include whether his bookkeeping practices were designed to overstate his assets when obtaining loans and to understate them for tax purposes, his possible destruction of presidential records and mishandling of classified materials and his interferences with vote counting. Some close Trump associates have either refused to provide evidence before congressional committees or have taken the Fifth Amendment on grounds that their testimony might incriminate them.

Thompson v. Trump is the one most closely related to First Amendment rights, and its ultimate resolution could be especially important in ascertaining the degree to which the standard for incitement in Brandenburg v. Ohio remains the law of the land, and the degree, if any, to which it might be modified when applied to a U.S. president and other public officials. These could become especially important if Trump decides to run again for president.

This article was published Feb. 21, 2022. John R. Vile is a Professor of Political Science and Dean of the University Honors College at Middle Tennessee State University and the author of A Companion to the United States Constitution and Its Amendments.