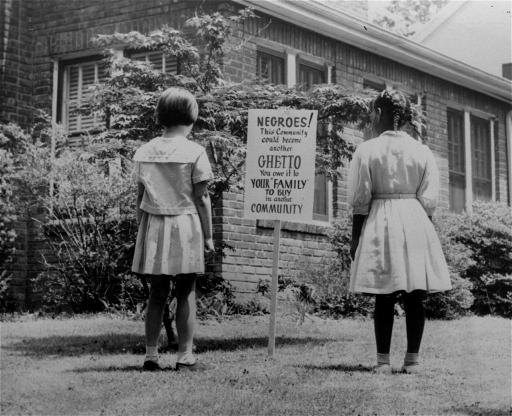 Integrated neighborhoods led to "white flight" in U.S. cities in the 1950s and '60s as whites sold homes and left neighborhoods increasingly populated by minorities. The town of New Jersey sought to stem white flight by limiting "For Sale" signs in neighborhoods, but the Supreme Court struck down the law in Linmark Associates, Inc. v. Township of Willingboro (1977). In this photo, two girls study a sign in an integrated community in New York in 1962. It reads "Negroes! This community could become another ghetto. You owe it to your 'family' to buy in another community." The sign was an attempt to keep African Americans from exceeding the number of whites who want to live in an integrated town. (AP Photo, used with permission from the Associated Press)

In Linmark Associates, Inc. v. Township of Willingboro, 431 U.S. 85 (1977), the Supreme Court found unanimously that a law limiting certain signage violated the fundamental First Amendment principle that people have a right to receive information and ideas and to decide for themselves the best course of action.

This decision contributed to the development of other First Amendment principles, such as commercial speech, secondary effects, and the counterspeech doctrine.

The case involved an ordinance in Willingboro Township, New Jersey, that limited “For Sale” signs on all property except for model homes. The township enacted the ordinance in order to stem the perceived problem of “white flight” — whites leaving neighborhoods increasingly populated by minorities. The township contended that it had a strong interest in promoting integrated housing. Linmark Associates, a real estate company, challenged the law on First Amendment grounds.

A federal district court declared the ordinance unconstitutional, but the U.S. Court of Appeals for the Third Circuit upheld it. On appeal, the Supreme Court invalidated the ordinance 8-0 (Justice William H. Rehnquist did not participate).

Writing for the Court, Justice Thurgood Marshall cited the Court’s recent commercial speech decision in Virginia State Board of Pharmacy v. Virginia Citizens Consumer Council, Inc. (1976), stating that consumers and sellers have an interest in the free flow of commercial information.

He also emphasized that in First Amendment law, government officials often may not restrict the most effective method of communication — in this case, “For Sale” signs in the selling of homes.

Marshall also rejected the township’s argument that its ordinance was not designed to suppress free expression but to address the harmful secondary effect of segregated housing. He rejected the secondary-effects analysis of Young v. American Mini Theatres (1976), noting that Willingboro “has proscribed particular types of signs based on their content because it fears their ‘primary’ effect that they will cause those receiving the information to act on it.”

Marshall wrote that the city can promote integrated housing through its own counterspeech by giving “widespread publicity through ‘Not For Sale’ signs or other methods.”