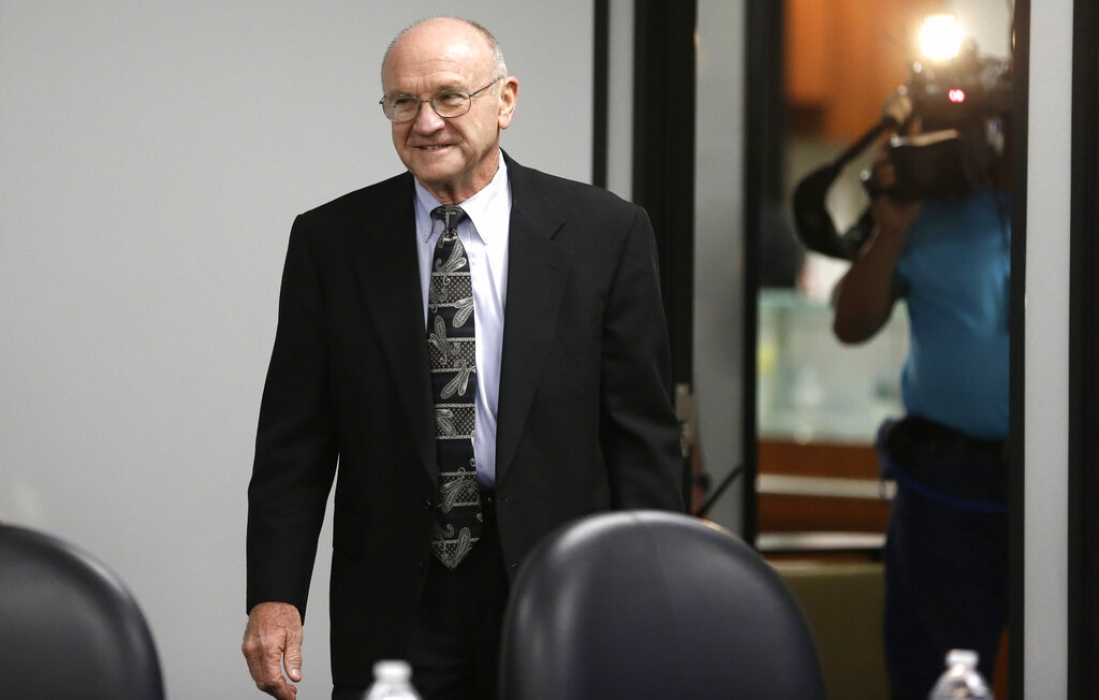 The U.S. Supreme Court in 2022 ruled against Houston Community College System board member David Wilson who had claimed that the board's censure of him was illegal retaliation for his criticism of the board and lawsuits, violating his rights to free speech under the First Amendment. The court said public officials should be able to shoulder some peer criticism and that the censure had not prevented Wilson from continuing to criticize the board. In this photo, David Wilson enters the room for a college board meeting in 2014. (AP Photo/Pat Sullivan)

In Houston Community College System v. Wilson, 595 U.S. ___ (2022), the U.S. Supreme Court ruled that Houston Community College System board member David Wilson did not have a valid First Amendment retaliatory claim after the board censured him for criticism of the board and costly lawsuits. Because the court did not believe that Wilson had properly raised other issues concerning whether the board had the power to exclude Wilson from becoming an officer or from the reimbursement for travel expenses, it did not specifically address those issues.

Justice Neil Gorsuch wrote the opinion for a unanimous court. He observed that Wilson’s tenure on the board, to which he was elected in 2013, had been “a stormy one.” In addition to criticizing policies of the other eight members, Wilson had filed lawsuits that had cost the board more than $270,000 in legal fees. The board voted to censure Wilson at a 2018 meeting. Wilson sought damages “for mental anguish, punitive damages, and attorney’s fees.”

Although a U.S. district court had dismissed Wilson’s complaints, the 5th U.S. Circuit Court of Appeals had reversed, finding that Wilson had proper standing to bring the suit and that he had stated “a viable First Amendment claim.”

The appeals court had reasoned that the verbal reprimand against an elected official for speech addressing a matter of public concern was an actionable First Amendment claim under § 1983” [federal law providing for civil rights suits]. The court also did not believe that the board’s other actions violated the First Amendment since they did not involve entitlements to which Wilson was privileged.

Gorsuch acknowledged that First Amendment precedents generally prevent prior restraint of speech and retaliatory actions for engaging in protected speech. Long-established precedents dating back to colonial times, however, had affirmed the right of public assemblies to censure their members.

Gorsuch observed that these precedents had continued both within Congress and at the state and local levels. He noted that in August 2020 alone, elected bodies had issued no fewer than 20 censures.

Precedents had limited some actions that were retaliatory against speech, but such precedents had distinguished “material from immaterial adverse actions” with special attention as to whether such actions tended to “chill” speech.

Gorsuch: Censure did not prevent Wilson from continuing to criticize

Gorsuch thought it was important to note that Wilson was an elected official and, as such, officials could be expected “to shoulder a degree of criticism about their public service from their constituents and their peers — and to continue exercising their free speech rights when the criticism comes.”  Moreover, just as Wilson had the right to criticize, so too, the First Amendment “cannot be used as a weapon to silence other representatives from doing the same.”

In upholding the censure, Gorsuch observed that “the censure at issue before us was a form of speech by elected representatives. It concerned the public conduct of another elected representative. Everyone involved was an equal member of the same deliberative body. . . . the censure did not prevent Mr. Wilson from doing his job, it did not deny him any privilege of office, and Mr. Wilson does not allege it was defamatory.” Moreover, the censure had not prevented Wilson from continuing his criticism. The fact that the censure was designated as “disciplinary” was immaterial as it had not silenced Wilson’s speech.

Verbal reprimands for speech may violate First Amendment in some cases

Somewhat limiting the scope of the decision, Gorsuch observed that there were limited occasions where verbal reprimands might give rise to First Amendment retaliatory claims, as in cases involving “students, employees, or licensees” or other private individuals. Gorsuch further decided that the cases of Bond v. Floyd, 385 U.S. 116 (1966) and Powell v. McCormack, 395 U.S. 486 (1969), or the case of John Wilkes in England, were not relevant to this case because they had involved exclusion from public office rather than mere censure.  Gorsuch observed that disputes such as Wilson’s should be resolved through “argument and counterargument” rather than through litigation.