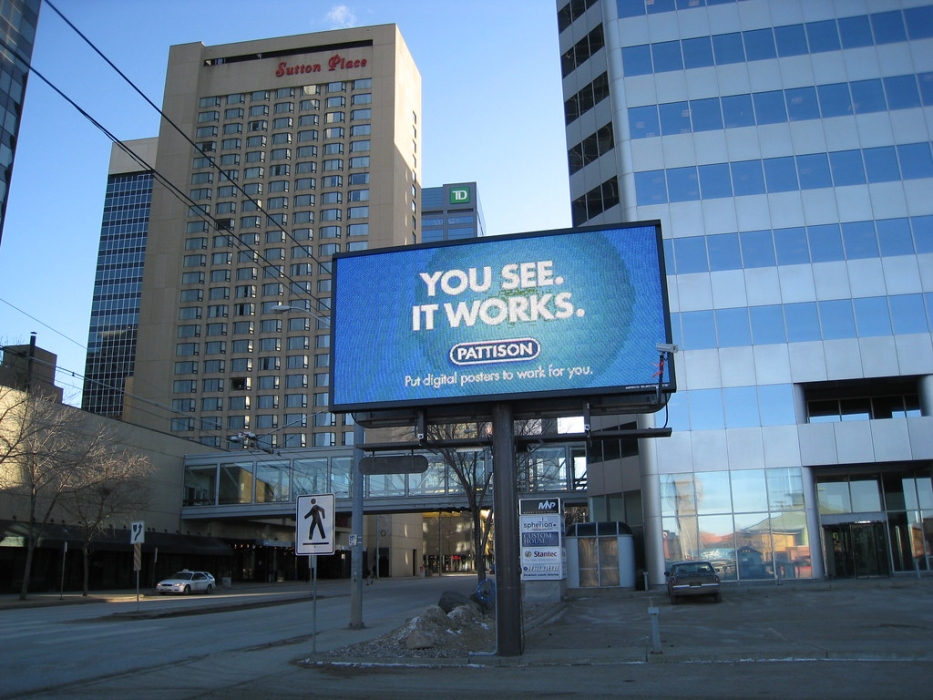 The Supreme Court ruled in 2022 that the city of Austin's regulations that prohibited new digital billboards or conversion of existing billboards to digital are not a violation of the free speech clause of the First Amendment just because the regulations allow digitization of signs that are on the premise of a business. (Photo illustrates an example of a digital billboard, CC BY-SA.2.0 by Mack Male)

In City of Austin v. Reagan National Advertising of Austin, LLC, 596 U.S. ____ (2022), the U.S. Supreme Court overturned a decision by the 5th U.S. Circuit Court of Appeals to hold that the city of Austin, Texas, did not violate the free speech clause of the First Amendment in its restrictions of digital billboards.

The city of Austin prohibited new off-premise digital signs (chiefly billboards) or digitization of existing ones while allowing digital signs on the premise of a business that advertised goods or services offered at the business. In so doing, the majority decision, written by Justice Sonia Sotomayor, decided that the law was not an improper example of content discrimination and did not, therefore, require strict scrutiny.

Sotomayor pointed out that American localities have been regulating outdoor advertising for more than a century. Such regulations proliferated after the adoption of the Highway Beautification Act of 1965. Many jurisdictions have distinguished, as Austin did, between on- and off-premises advertising. Although Austin grandfathered in existing off-premise signs, it subjected new signs to uniform regulations designed to enhance the aesthetic value of the city. In this case, it had refused to allow new digital signs or digitization of existing off-premises signs.

Court precedents acknowledge a regulation is content based if it “applies to particular speech because of the topic discussed or the idea or message expressed,” Sotomayor observed. A content-based restriction on speech is presumptively unconstitutional and subject to strict scrutiny, the highest form of judicial review, whereas content-neutral laws generally must survive only intermediate scrutiny.

Sotomayor thought that it would be “too extreme an interpretation of this Court’s precedent” to say that Austin’s regulation was content-based simply because someone had to determine whether a sign did or did not relate to a good or service being offered on the premises.

While the sign regulation at issue in the Supreme Court’s ruling in Reed v. Town of Gilbert (2015) had required the city to distinguish among ideological signs, political signs, and temporary directional signs, the Austin regulations did not require such precise classification or treat them differently. The Austin regulations more resembled the regulations upheld by the Supreme Court in Heffron v. International Society For Krishna Consciousness, Inc. (1981), Sotomayor wrote. In Heffron, city authorities simply had to decide whether or not individuals were or were not soliciting donations.

“Underlying these cases and others is a rejection of the view that any (city) examination of speech or expression inherently triggers heightened First Amendment concern. Rather, content-based regulations are those that discriminate based on ‘the topic discussed or the idea or message expressed,'’’ Sotomayor wrote.

Although the ruling found that the regulations did not involve improper content discrimination and should be given only intermediate, rather than strict, scrutiny, the parties had not litigated the issue as to whether there might be “an impermissible purpose or justification” behind an otherwise facially content-neutral restriction.” The court accordingly remanded the case back to the lower courts for such a determination.

Breyer: Regulation does not interfere with 'marketplace of ideas'

Whereas the majority decision had distinguished this case from the decision in Reed, Justice Breyer wrote a concurring opinion in which he argued that Reed had been incorrectly decided.  Noting that “(t)he First Amendment is not the Tax Code,” Breyer said that doctrines such as the presumption against content discrimination should be treated “not as bright-line rules, but instead as rules of thumb.”

In this case, he saw no evidence that the city of Austin had applied its regulation in a way as to interfere with the “marketplace of ideas.” He thought that there were adequate prudential reasons to suggest that on-premise signs were less likely than billboards and other off-premise signs to lead to visual clutter or to cause traffic accidents by distracting drivers.

Justice Samuel Alito concurred in the judgment but dissented from some of the majority reasoning by noting that it was not always apparent whether signs posted near a place of business were actually directly related to that business.

Dissent would have subjected Austin sign ordinances to strict scrutiny

Justice Clarence Thomas authored the dissent that was joined by Justices Neil Gorsuch and Amy Barrett. They thought the majority opinion was an improper departure from the decision in Reed. But the dissent also appeared directed largely to disagreeing with the decision in Hill v. Colorado (2000).

In Hill, the court  upheld restrictions on counseling outside abortion clinics as content-neutral regulations rather than attempts to block a particular viewpoint. The dissenting justices  favored a “bright-line rule for content-based restrictions” and would have subjected the Austin regulations to strict scrutiny.

Thomas subjected each of the majority’s arguments to point-by-point refutation. Whereas the majority had stressed the length of time that sign regulations had been in place, Thomas noted that they were not based on constitutional originalism since there was no evidence that the American Founders had dealt with such issues.  Thomas concluded by arguing that it was better to adhere to the “clear and neutral role that Reed had provided rather “than risk resuscitating Hill.”

This article was published April 22, 2022. John R. Vile is a professor of political science and dean of the University Honors College at Middle Tennessee State University.