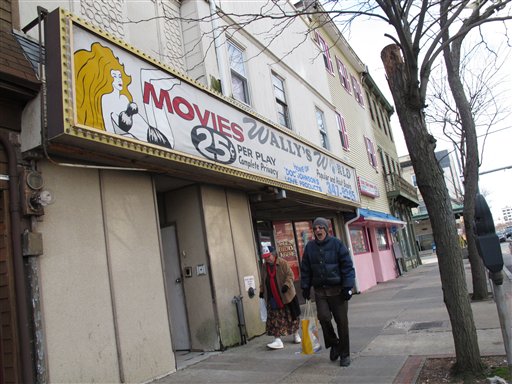 In City of Los Angeles v. Alameda Books, 535 U.S. 425 (2002), the Supreme Court ruled that Los Angeles could rely on a six-year-old study on the negative impact of adult businesses to justify an ordinance prohibiting more than one adult business from operating under the same roof. In this photo, an adult bookstore and peep show are open along Atlantic Avenue, one of the main downtown business streets in Atlantic City, N.J. on Tuesday, Jan. 31, 2012. (AP Photo/Wayne Parry, used with permission from the Associated Press)

In City of Los Angeles v. Alameda Books, 535 U.S. 425 (2002), the Supreme Court ruled that Los Angeles could rely on a six-year-old study on the negative impact of adult businesses to justify an ordinance prohibiting more than one adult business from operating under the same roof.

A narrow majority of the Court reasoned that the ordinance banning multiple-use adult businesses furthered the city’s interest in combating the harmful secondary effects of such businesses.

In 1977, Los Angeles conducted a study concluding that concentrations of adult businesses increased crime, including prostitution, robbery, and assaults. Six years later, the city passed a law prohibiting an adult business from operating more than one such establishment in the same location.

Alameda Books and Highland Park Books challenged the new law; they also rented sexually explicit videos and provided booths for would-be patrons to view them. According to city inspectors, both businesses were operating as adult bookstores as well as adult arcades, and according to the city law, such operations constituted impermissible multiple-use adult businesses. Alameda and Highland Park filed a federal lawsuit, seeking a declaratory judgment that the new law violated the First Amendment.

A federal district court in California ruled in favor of the bookstores. On appeal, the Ninth Circuit Court of Appeals affirmed, reasoning that the city could not reasonably rely on a six-year-old study to justify its ordinance based on the rationale that multiple-use businesses caused the same harmful, secondary effects as a collection of different adult businesses in the same area.

Court: City is rational in concluding crime as secondary effect of adult businesses

The Supreme Court reversed the Ninth Circuit’s ruling. Writing for a plurality, Justice Sandra Day O’Connor reasoned that “it is rational for the city to infer that reducing the concentration of adult businesses in a neighborhood, whether within separate establishments or in one large establishment, will reduce crimes.”

Justice Antonin Scalia, in his concurring opinion, emphasized that “the Constitution does not prevent those communities that wish to do so from regulating, or indeed entirely suppressing, the business of pandering sex.”

In a separate concurrence, Justice Anthony M. Kennedy wrote that preventing “two adult businesses under one roof is reasonably likely to cause a substantial reduction in secondary effects while reducing speech very little.” Kennedy would, however, require cities to meet a higher burden of proof than would O’Connor.

Justice David H. Souter dissented in an opinion joined by Justices John Paul Stevens, Ruth Bader Ginsburg, and Stephen G. Breyer. Souter wrote that the law at issue should be considered “content correlated” — a category between content-neutral and content-based laws.

He noted that Los Angeles failed to “proffer any evidence to support even the simple proposition that an otherwise lawfully located adult bookstore combined with video booths will produce any criminal effects.”