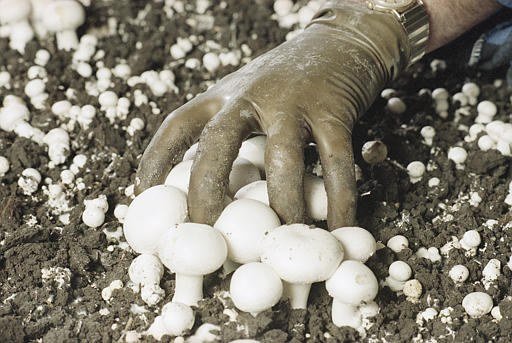 In this 1988 photo, a worker in Pennsylvania picks mushrooms in the dark Moonlight Mushrooms Inc., mine that employs more than 900 people. In 2001, the Supreme Court overturned a federal law that required mushroom producers to subsidize generic advertising, finding that the rule was a form of compelled speech impermissible under the First Amendment. (AP Photo/Gene Pushkar, used with permission from The Associated Press.)

In United States v. United Foods, Inc., 533 U.S. 405 (2001), a compelled advertising case, the Supreme Court ruled that mushroom producers could not be forced to subsidize generic advertising for mushrooms.

The Court reasoned that “First Amendment values are at serious risk if the government can compel a particular citizen, or a discrete group of citizens, to pay special subsidies for speech on the side that it favors.”

United Foods, Inc., a Tennessee-based mushroom producer, objected to the forced advertising subsidies, arguing that such advertising conflicted with its message that its own mushrooms were superior to others. A district court, following the lead of an administrative law judge, had rejected this plea, but the Sixth Circuit Court of Appeals had ruled in favor of United Foods, Inc.

In affirming the circuit court ruling, the Supreme Court distinguished the case of mushroom producer United Foods from its 1997 decision in Glickman v. Wileman Brothers & Elliott, Inc., in which the Supreme Court upheld a series of agricultural marketing orders for California tree fruits that included assessments for generic advertising because they determined that the program was part of a larger plan of collectivized economic regulation, not speech compulsion.

In United Foods, the Court noted that in Glickman “the mandated assessments for speech were ancillary to a more comprehensive program restricting marketing autonomy.” In United Foods, according to Justice Anthony M. Kennedy, who wrote for the majority, “the advertising itself, far from being ancillary, is the principal object of the regulatory scheme.” Kennedy viewed the forced advertising program for mushroom producers as a clear case of compelling speech.

The federal government tried to argue that the forced mushroom advertising was a form of government speech immune from First Amendment review. However, the Court rejected this argument because it was not advanced in the lower courts. The government later successfully advanced the government-speech argument in the beef advertising decision Johanns v. Livestock Marketing Association (2005).