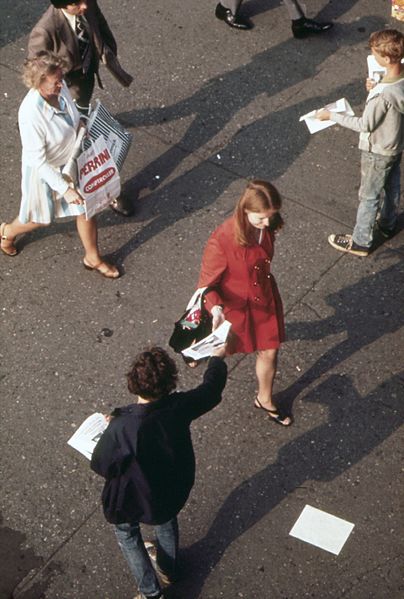 In Valentine v. Chrestensen, 316 U.S. 52 (1942), a case about a man passing out flyers in New York City, the Supreme Court ruled unanimously that commercial speech is not protected by the First Amendment. This decision profoundly altered the course of decision making in subsequent commercial speech cases. However, because the Court cited neither any reason nor any precedent for this conclusion, Valentine has served as an impediment to rather than as a precedent for assessing the relationship between commercial speech and the First Amendment.(Image of passing out flyers via National Archives, public domain)

Chrestensen sued to be able to hand out handbills

F. J. Chrestensen attempted to distribute handbills advertising his business — tours of his privately owned World War I submarine — in the streets of New  York City. Police advised him that a city sanitation code prohibited his “distribution in the streets of commercial and business advertising matter,” although “he might freely distribute handbills solely devoted to ‘information or a public protest.’ ”

Chrestensen responded by producing a handbill advertising his business on one side and, on the other, protesting the city’s refusal to provide wharfage facilities at a city pier for the exhibition of his submarine. When the police attempted to prevent distribution of the revised handbill, Chrestensen sued and won an injunction against the city.

Court said commercial speech was an exception to the First Amendment

For the Court, Justice Owen J. Roberts wrote that “the Constitution imposes no . . . restraint as respects purely commercial advertising.” The Court assigned to the legislature the responsibility for balancing the competing interests of businesses and the public. The justices asserted that Chrestensen’s revised handbill was merely a subterfuge designed to evade the ordinance. The Court made no attempt to explain why commercial speech constitutes a categorical exception to the First Amendment as applicable to the states and municipalities via the Fourteenth Amendment.

Court has identified some types of protected commercial expression

In a series of subsequent decisions from 1943 to 1976, the Court identified types of commercial expression that would be protected despite its ruling in Valentine. These included the public distribution of religious materials containing advertising in Jamison v. Texas (1943), advertising soliciting donations for civil rights activities in New York Times Co. v. Sullivan (1964), and advertising containing truthful information regarding social issues in Bigelow v. Virginia (1975). None of these cases involved the “purely commercial advertising” declared to be unprotected in Valentine. In the one case that did request constitutional protection for purely commercial expression — a door-to-door sales representative’s speech in Breard v. Alexandria (1951) — the Court ruled that the First Amendment does not apply to “solicitors for gadgets and brushes.”

In 1976 the Court reversed its position and identified constitutional values for purely commercial expression. In Virginia State Board of Pharmacy v. Virginia Citizens Consumer Council, Inc. (1976), the Court concluded that “the free flow of commercial information is indispensable” to effective decision making in “a free enterprise system” and “to the formation of intelligent opinions as to how that system ought to be regulated or altered.” Although the Virginia Pharmacy decision did not explicitly overturn Valentine, it unambiguously repudiated that precedent’s conclusion regarding constitutional protection for commercial speech. Finally, in Central Hudson Gas and Electric Corp. v. Public Service Commission (1980) the Court articulated a four-part test to be used when regulating commercial speech.