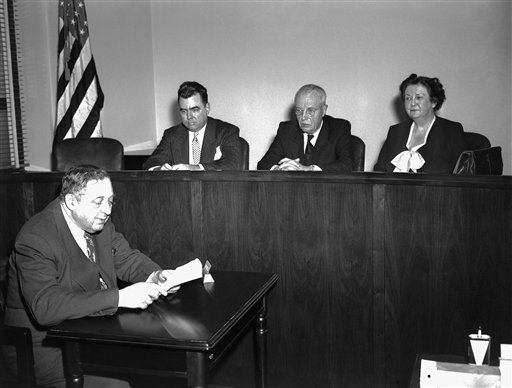 In this photo, the government's subversive activities control board opens public hearings on the registration of the Communist party in 1951. In American Committee for Protection of Foreign Born v. Subversive Activities Control Board(1965), the Supreme Court said the board should reconsider the communist classification of an organization. (AP Photo/Byron Rollins, used with permission from The Associated Press)

Subversive activities board should reconsider classification of communist-front organization

The Court’s per curiam opinion observed that the control board had based its classification in part on the membership of its leader, Abner Green, in the Communist Party, and that in light of Green’s death it should reconsider the designation.

Justice William O. Douglas dissented, objecting to what he considered to be the Court’s refusal to examine the control board’s authority to classify organizations as communist. He observed that the board had considered lots of evidence other than Green’s own affiliation in making its initial classification.

He believed its actions constituted illegal bills of attainder, imposed “cruel, unusual and savage punishments for thought, speech, writing, petition and assembly, and that it stigmatizes people for their beliefs, associations and views about politics, law, and government.” He objected to the Court’s attempts to dodge such “thought-stifling” actions, which he believed denied “the constitutional heritage of every freedom-loving American.”

In a companion case, Veterans of the Abraham Lincoln Brigade v. Subversive Activities Control Board, the Court found that the determination that the brigade was a communist organization was too “stale” for review. Justice Black referred readers to his dissent in American Committee, while Justice Douglas, joined by Black and John Marshall Harlan II, argued that the case was ripe for review and should be decided by the Court.