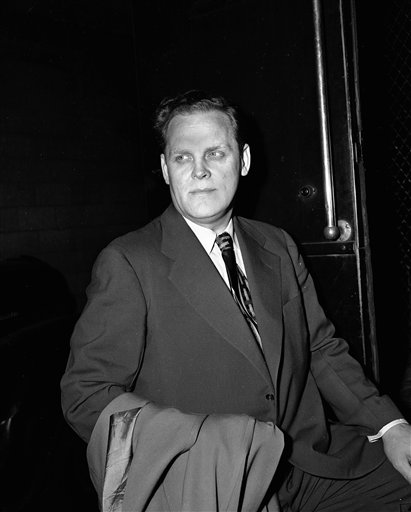 In Communist Party of Indiana v. Whitcomb, 414 U.S. 441 (1974), a unanimous Supreme Court invalidated a state loyalty oath requirement on First Amendment grounds because it prohibited protected political advocacy. State officials then denied the Communist Party of Indiana access to the ballot in 1972 for its presidential candidate Gus Hall because of the oath requirement.  In this photo, Hall is pictured after receiving three years sentence for criminal contempt, in New York, Dec. 27, 1951. (AP Photo/Jacob Harris, used with permission from the Associated Press)

Indiana had passed an election law prohibiting a political party from placing its candidates on the ballot unless the party’s officers took an oath not to “advocate the overthrow of local, state or national government by force or violence.” State officials then denied the Communist Party of Indiana access to the ballot in 1972 for its presidential candidate Gus Hall because of the oath requirement.

In ruling aginst Indiana, the Supreme Court cited a long list of loyalty oath cases striking down similar laws in other contexts, including Keyishian v. Board of Regents (1967), Elfbrandt v. Russell (1966), and Cramp v. Board of Public Instruction of Orange County (1961). The Court noted that the Indiana law prohibited mere abstract advocacy that did not meet the speech-protective standard set forth in Brandenburg v. Ohio (1969).

The state had argued that these loyalty oath precedents should not apply in the ballot access context, an area in which states traditionally had had great control. Writing for the Court, Justice William J. Brennan Jr. agreed that state officials had such control, but also noted that “at stake are appellants’ First and Fourteenth Amendment rights to associate with others for the common advancement of political beliefs and ideas.” He reasoned that burdening access to the ballot infringed on interests “as substantial as those in public employment, tax exemption, or the practice of law.”

Justice Lewis F. Powell Jr. wrote for three justices in a plurality opinion that concurred only in the result. Powell reasoned that the case should have been decided on equal protection grounds because Indiana had certified the Democratic and Republican Parties even though their officials had never submitted to the oath requirement.