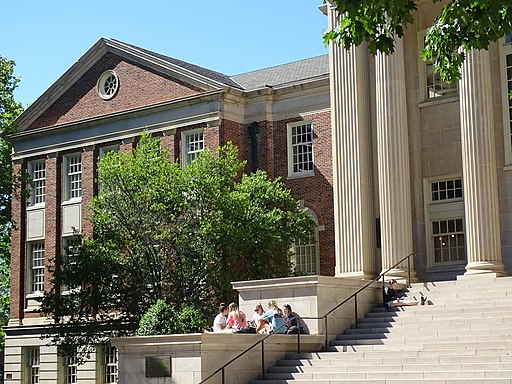 The 11th U.S. Circuit Court of Appeals in 1991 upheld the University of Alabama's actions in prohibiting a professor from interjecting his religious beliefs during his physiology classes and holding "optional classes" in which he delivered a Christian perspective on the academic topic. Students had complained they felt coerced to attend the extra classes. While the ruling acknowledged academic freedom, it said the university had the right to restrict classrooms to relevant discussions of the subject matter. (Photo is a campus scene of the University of Alabama in Tuscaloosa in 2017 by Adam Jones, CC BY-SA 2.0)

Sometimes circuit court cases illumine issues that have not been directly answered by the U.S. Supreme Court.  Bishop v. Aronov (1991) is such a case. It involved academic freedom at the college and university level.

Phillip A. Bishop, a professor of exercise physiology in the College of Education at the University of Alabama occasionally referred to his Christian beliefs in his classes and invited students in his classes to attend optional sessions prior to final exams in which he presented his views that human physiology was evidence of intelligent design.

U. of Alabama asks professor to stop interjecting religion in class

After students complained that they felt coerced to attend the extra classes, Bishop’s supervisor drew up a memo affirming Bishop’s academic freedom but directing him to discontinue “1) the interjection of religious beliefs and/or preferences during instructional time periods and 2) the optional classes where a ‘Christian Perspective’ of an academic topic is delivered.”  Bishop objected that this interfered with his First Amendment freedoms of speech and its two religion clauses.

He filed a lawsuit and a U.S. district court issued an injunction that prevented the university from stopping Bishop.

The 11th U.S. Circuit Court of Appeals overturned this ruling in a decision authored by Senior Judge Floyd R. Gibson. The circuit court observed that the university was walking “a first amendment tight rope,” in part because the university’s counsel feared that Bishop’s action might create an impermissible establishment of religion.

The district court had relied chiefly on the decision in Widmar v. Vincent (1981), which had struck down a regulation prohibiting the use of university facilities for religious purposes, and the belief that the classroom was an “open forum” and  the memo to Bishop had been “overbroad and vague.”

By contrast, the circuit court did not believe that Bishop’s classroom constituted an open forum. Rather, the university had the right to restrict classrooms to relevant discussions of the subject matter.

In a class on religion, for example, Bishop’s comments might have been completely appropriate. The university was not seeking to restrict Bishop’s speech in other settings but only those within the classroom or, like the optional lectures, related to it. Although professors were free to seek to enhance camaraderie by trying to share personal experiences, the evidence did not suggest that activities by other professors had evoked the same concerns among students, especially with regard to religious establishment and coercion.

The circuit court acknowledged that prior case law on the subject had been inconclusive and thought that a case-by-case approach was therefore appropriate.

Pickering v. Board of Education (1968) had recognized the right of teachers to speak on matters of public concern outside the classroom, and Tinker v. Des Moines (1969) had recognized certain free speech rights for students. But Tinker had also recognized that “a teacher’s speech can be taken as directly and deliberatively representative of the school” in a manner that student speech could not.

A university certainly had the right to establish “the parameters of focus and general subject matter of curriculum,” and courts should generally defer to the judgment of educational supervisors rather than intervene, the circuit court said.

University was right to prevent coercion of students

Considering the basic educational mission of the university, the possible coercive effect of the professor’s invitation to extra class sessions, and the professor’s role as a public employee, the circuit court believed that the university had acted appropriately in asking Bishop to discontinue interjecting his religious beliefs during class time and the optional “Christian perspective” classes.

It emphasized, however, that professors retained a great deal of academic freedom, particularly with regard to speech that took place outside of, or was unrelated to, university courses. However, “the university’s conclusions about course content must be allowed to hold sway over an individual professor’s judgments.”

The circuit court gave relatively short shrift to Bishop’s arguments from the two religion clauses of the First Amendment. It distinguished the free exercise rights of practicing one’s religion from that of injecting it into the school curriculum. It further believed that the memo that had been issued to Bishop was intended to avoid “the appearance of proselytizing by a professor.”  The court found no conflict between what the university had done and the Lemon test (since largely discarded) for judging violations of the establishment clause.

Although the case arguably could have gone further in protecting professors’ rights to express their views in classroom settings, its praise of academic freedom served as a key support for a U.S. district court decision in Pernell v. Florida Board of Governors (2022). In Pernell a federal judge struck down the Stop W.O.K.E. Act, designed to prohibit professors from offering certain views or provoking discipline-related discussions regarding race, sex, and merit within the classroom.

This article was published on Nov. 22, 2022. John R. Vile is a professor of political science and dean of the Honors College at Middle Tennessee State University.