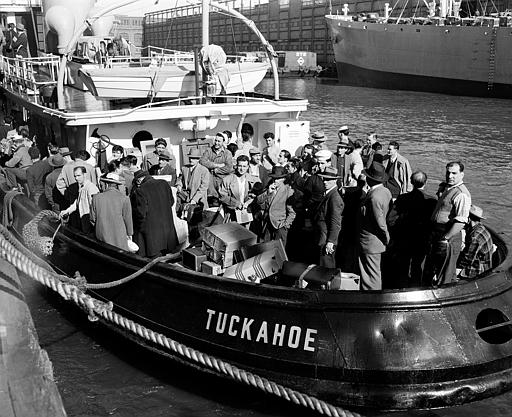 A group of deportees, some sailors who jumped ship in New York, arrive at Pier 3, in New Jersey in 1952, aboard Coast Guard cutter Tuckahoe, prior to boarding the liner Argentina for Europe. The group was part of 269 to be deported in a single week. In Harisiades v. Shaughnessy (1952), the Supreme Court upheld deportation based upon membership in the Communist Party. (AP Photo, used with permission from the Associated Press)

In Harisiades v. Shaughnessy, 342 U.S. 580 (1952), the Supreme Court upheld a provision of the Alien Registration Act of 1940 requiring deportation of resident aliens who at the time of their entry or thereafter belonged to organizations that advocate the unlawful overthrow of the government, in this case the Communist Party. The Court decided that these deportations were not inconsistent with either the freedoms of speech or assembly guaranteed by the First Amendment rights or with other constitutional protections.

Harisiades, who had been born in Greece, was joined by individuals born in Italy and Russia who challenged the legality of their deportation by Shaughnessy, a district director of immigration and naturalization.

Writing the opinion for the Court, Justice Robert H. Jackson rejected claims that the deportation violated the due process clause of the Fifth Amendment, abridged First Amendment expressive freedoms, or was an unconstitutional ex post facto law. In addressing the first issue, Jackson stated that being a permanent resident does not confer a “vested right” on aliens equal to that of citizens. Legal alien residents are in America not by “right” but as “a matter of permission and tolerance.” International law permits deportation as a “weapon of defense and reprisal.” Moreover, this is a matter “so exclusively entrusted to the political branches of government as to be largely immune from judicial inquiry or interference.” In a concurrence, Justice Felix Frankfurter pointed to the primary responsibility of Congress to deal with matters of naturalization.

As to First Amendment freedoms of speech, press, and assembly, the Court had established in Dennis v. United States (1951) that none of these rights “include the practice or incitement of violence.” Moreover, the Court held that the law did not violate the ex post facto clause because it involved a civil rather than a criminal matter and was consistent with earlier laws on the subject.

In dissent, Justice William O. Douglas argued that the law unfairly tainted people, not for past activities, but for what their political views once were. He believed that they should have been given a hearing to show that they did not still hold the views attributed to them.