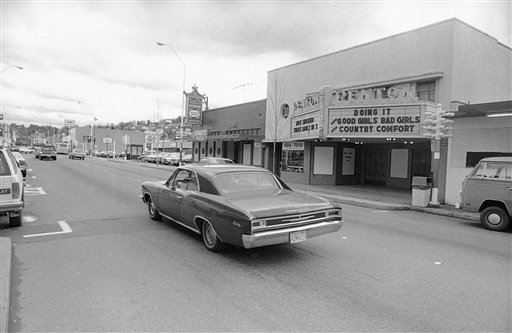 The Renton Theater was the subject of a U.S. Supreme Court ruling on Tuesday, Feb. 25, 1986, which gave communities broad authority to use zoning to limit adult movie theaters to isolated areas or scatter them around the city. (AP Photo/Barry Sweet, used with permission from The Associated Press.)

In City of Renton v. Playtime Theatres, Inc., 475 U.S. 41 (1986), the Supreme Court held that a zoning ordinance aimed at controlling the undesirable “secondary effects” of adult or sexually oriented establishments could be considered a content-neutral, reasonable time, place, and manner restriction of expression.

This 7-2 decision created a constitutional precedent for testing adult-use zoning laws. Prostitution, loss of privacy, noise, traffic congestion, security concerns, and potential harm to children are considered to be among the relevant secondary effects.

Investors in two separate adult theater interests had purchased locations in downtown Renton, Washington, with the intent of opening adult movie theaters, knowing that a year-old city ordinance prohibited such facilities within 1,000 feet of “any residential zone, single or multiple-family dwelling, church, park, or school.”

The restrictions made 95 percent of the city off-limits for adult theaters, including the locations secured by the investors; there were no commercially available or viable locations in the remaining 5 percent.

Playtime filed suit and opened for business after winning a temporary injunction from the federal district court. On the parties’ later joint motion for summary judgment, the district court ruled in favor of the city, finding that “the purposes of the ordinance were unrelated to the suppression of speech, and that the restrictions on speech imposed by the ordinance were no greater than necessary to further the governmental interests involved.”

The district court relied in large part on the plurality opinion in Young v. American Mini Theatres (1976), which upheld a Detroit zoning ordinance requiring that adult theaters and similarly regulated establishments be distant from one another and at least 500 feet from residential zones, based on a city council finding that “a concentration of adult movie theaters causes the area to deteriorate and become a focus of crime.”

Playtime won a reversal before the Ninth Circuit Court of Appeals, which ruled that the Renton ordinance constituted a substantial restriction of First Amendment expression and that the city had failed to show a substantial governmental interest; rather, it had merely relied on the experiences of other cities’ use of restrictions rather than evidence of the effect of such restrictions in its own case. Furthermore, the circuit court found that Renton’s asserted interests were not unrelated to the suppression of expression.

Court: Ordinance is a reasonable time, place and manner restriction

On review, the Supreme Court held that the zoning ordinance did not violate the freedom of expression.

Though the ordinance expressly applied only to theaters showing movies with adult content, the Court majority reasoned that the law was aimed at “the secondary effects of such theaters on the surrounding community.”

Deferring to the trial court’s factual findings and those included in an amendment to the ordinance adopted by the city after litigation was filed, the majority held that the ordinance served a substantial governmental interest in preserving the quality of life and allowed for “reasonable alternative avenues of communication.”

Dissenters noted lack of evidence of harm from adult theaters

Justice William J. Brennan Jr., joined in dissent by Justice Thurgood Marshall, worried that the Court’s opinion did not take seriously enough the prospect of governments “us[ing] their zoning powers as a pretext for suppressing constitutionally protected expression.”

He echoed complaints of critics who pointed out that Renton officials had made no studies or generated any evidence that adult businesses caused any harm in the city or that the ordinance was a remedy for any supposed harm. The Court majority reasoned, however, that “[t]he First Amendment does not require a city, before enacting such an ordinance, to conduct new studies or produce evidence independent of that already generated by other cities, so long as whatever evidence the city relies upon is reasonably believed to be related to the problem that the city addresses.”

Brennan further noted that the city’s post-litigation identification of harms included several that were speculative and content based, such as concerns that prominently located adult entertainment “will cause a degradation of the community standard of morality” and “a degrading effect upon the relationship between spouses.” The Court majority, however, was more deferential, satisfied that the “predominate” intent behind the ordinance was legitimate.

Brennan’s dissent shared with many free-speech advocates a concern that the secondary effects approach approved in Renton represents a license for governments to drive adult material from the public sphere because of objection to its content.

First Amendment advocate John Weston, who argued Young, believes that city governments turned to zoning regulations as a way of attacking adult businesses when they found themselves unable to obtain obscenity convictions against theater owners. Although the scope of the Renton decision remains controversial, its practical impact has been attenuated by the decline of adult theaters in the face of easy access to adult materials through the Internet and pay-per-view television.