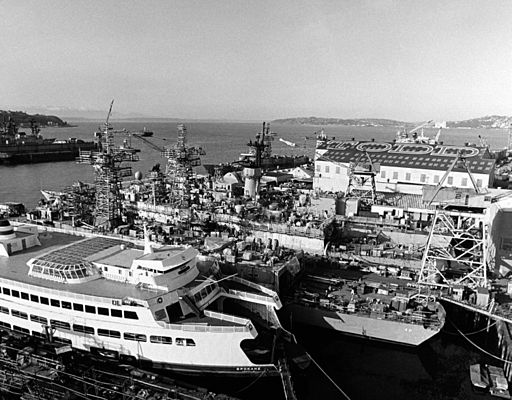 A machinist and member of the Communist Party who worked at a shipyard of Todd Shipyards Corporation in Seattle was indicted under the Subversive Activities Control Act for continuing to work at the shipyard after the Secretary of Defense designated it in a defense facility. However a federal court dismissed the indictment for failure to show active membership and the U.S. Supreme Court upheld the decision based on the First Amendment right of association in the case United States v. Robel. (Photo of Navy ships and a ferry under construction at Todd Shipyards in Seattle in 1983, public domain via Wikimedia.)

The Supreme Court decision in United States v. Robel, 389 U.S. 258 (1967), affirmed a federal district court decision dismissing an indictment against a machinist and member of the Communist Party who had been charged under the Subversive Activities Control Act, also known as the McCarran Internal Security Act of 1950.

Robel had been indicted for continuing to engage in employment at a shipyard after the secretary of defense had declared it a defense facility.

Chief Justice Earl Warren wrote the majority opinion. Whereas the district court had based its decision on the failure of the indictment to show active membership and “specific intent,” Warren based his decision on the First Amendment right of association.

Warren found that the statute at issue “sweeps indiscriminately across all types of association with Communist-action groups, without regard to the quality and degree of membership.” Warren rejected the government’s plea to accept the law under its war power. He observed that “it would indeed be ironic if, in the name of national defense, we would sanction the subversion of one of those liberties — the freedom of association — which makes the defense of the Nation worthwhile.”

Justice William J. Brennan Jr. authored a concurring opinion that focused on the fact that “the congressional delegation of authority to the Secretary of Defense to designate ‘defense facilities’ creates the danger of overbroad, unauthorized, and arbitrary application of criminal sanctions in an area of protected freedoms and therefore . . . renders this statute invalid.”