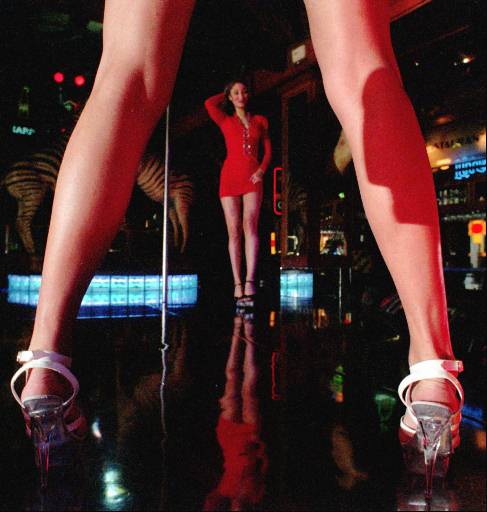 In Doran v. Salem Inn (1975) considered a First Amendment challenge to an ordinance banning topless dancing in nightclubs. In this photo, Aubrey Moore, center, dances at the Colorado Bar & Grill in 1997. (AP Photo/David J. Phillip, used with permission from the Associated Press)

Writing for the majority of eight, Justice William H. Rehnquist suggested that barroom dancing “might be entitled to First and Fourteenth Amendment protection under some circumstances.” The Court ruled that one nightclub, which was being prosecuted, was not entitled to have its claims for relief considered, whereas the other two were.

The clubs, which argued that the law infringed upon their First Amendment rights, voluntarily stopped their topless performances to file suit. After the district court denied the TRO, but about two weeks before the preliminary injunction hearing, M & L resumed topless dancing and was promptly served with criminal summonses.

The district court and court of appeals concluded that judicial energy would be conserved, and potentially conflicting outcomes avoided, by granting a preliminary injunction to all three nightclubs.

The Court asked whether Younger, Steffel, and Samuels “must give way” to interests in efficient judicial administration and avoiding conflicting outcomes.

While recognizing that there “may be some circumstances in which legally distinct parties are so closely related that they should all be subject to the Younger considerations which govern any one of them,” Rehnquist distinguished Doran, observing that the bars (although sharing counsel and operating in similar formats) were “unrelated in terms of ownership, control, and management.”

Bars' requests for injunctive and declaratory relief were barred

Rehnquist concluded that each corporation “stood alone.” M & L’s requests for injunctive and declaratory relief were barred under Younger and Samuels, respectively.